(Natural News) Yet another Western-style “democracy” is slowly devolving into just another leftist dictatorship using the Wuhan coronavirus (COVID-19) pandemic as an excuse to go full authoritarian.

According to an image posted on social media, a court in New Zealand is threatening to seize a citizen’s property over alleged “non-compliance” with COVID testing, as reported by the United Kingdom-based Daily Exposé.

If you don’t pay or arrange payment the court can issue a warrant for your arrest; suspend your driver’s license; seize and sell your property, or take money from your income or bank account; report your overdue fine as part of your credit reference check – meaning you may or may not be able to get a loan, credit card or hire purchase; restrict your ability to sell property; and stop you from traveling overseas. 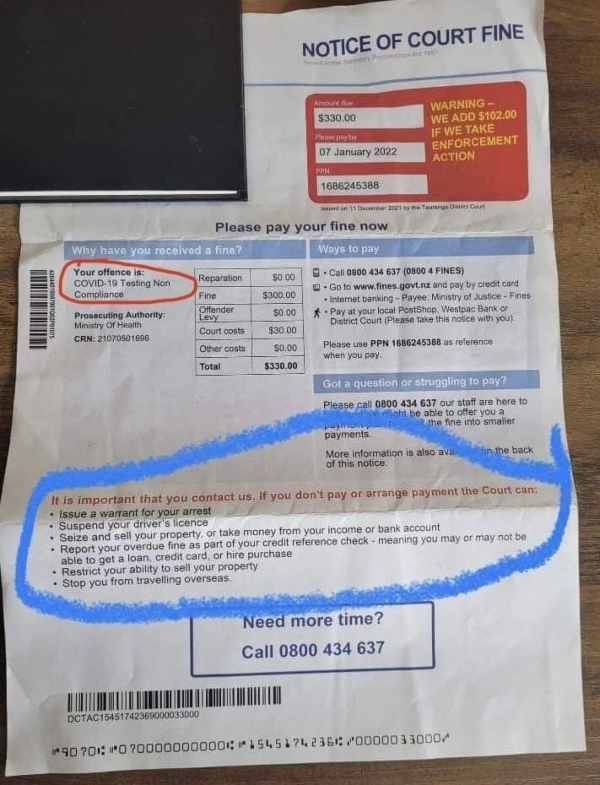 The fines were first imposed by the New Zealand Ministry of Health chief Caroline McElnay, who claimed it was necessary to move from monitoring for compliance to enforcement in order to keep the virus from spreading or showing up at all.

“Border controls are a key tool for stopping the introduction and spread of new cases from overseas and remain central to our elimination strategy, which has served us so well,” she said after 18 border security employees failed to get tested properly.

The Daily Exposé reported: “For not taking a test, for not being obedient to the state, a person could lose the right to drive, travel, obtain a credit card or loan and /or may be restricted in selling property.  In essence, if a person does not obey, they risk having fewer rights. This has the look and feel of a Chinese-style social credit system.”

Carol Sakey of Wake Up New Zealand said she believes the Chinese Communist Social Credit System is already operating in the island-nation.

“The Communist Chinese regime is  ‘anti-human rights,’ atheist and opposed to Christianity. Noticeably these are similar characteristics as to Ardern’s Marxist Socialist politically ideology,” she said last year.

“Since Jacinda Ardern became Prime Minister of New Zealand, our human rights, civil liberties, freedoms have become seriously eroded and our democratic rights targeted. Because of this, I believe that New Zealand has become fertile land to seed, grow the Communist Chinese Credit System,” Sakey noted.

This is the same Ardern who, in August 2020, vowed to put citizens who tested positive for COVID-19 in “quarantine camps,” as Natural News reported.

“New Zealanders admitted to these camps will be monitored 24 hours a day, seven days a week. Their every move will be tracked, and ‘health staff’ will reportedly be present ‘at all times’ to ‘look after people.’ In an announcement, New Zealand’s Director-General of Health Dr. Ashley Bloomfield explained that these so-called quarantine facilities represent a major departure from what health officials were doing in the country at its last level-three reopening phase,” Natural News reported.

Initially, New Zealanders who tested positive or who contracted the virus were simply told to self-isolate, but that changed quickly after the WEF-trained Ardern understood she could exploit the virus to dramatically expand her own authority and that of her government.

“[It] shows how serious we are about limiting any risk of ongoing transmission – even in self-isolation and including to others in the household,” Bloomfield explained at the time.

“A reminder, these facilities have been set up specifically and have excellent processes and resources in place to look after people with COVID-19, including health staff on site at all times,” he added. “It will help us avoid any further inadvertent spread into the community as part of our overall response.”

Real democracy is dying around the globe, and it will take unconventional methods to get it back.

Previous :Stunning video shows Canadian PM Trudeau ADMITTING his favorite country is China because it’s a “dictatorship”
Next : Dems push for “Department of Reconciliation” that could actually ignite a RACE WAR
Receive Our Free Email Newsletter