(Natural News) A former Obama Department of Homeland Security official who did her best fascist authoritarian impression when lashing out at protesting Canadian truckers was all in for the Black Lives Matter and Antifa riots during the summer of 2020 because a) she hates Donald Trump, and b) any left-wing cause is acceptable to her.

“The convoy protest, applauded by right wing media as a ‘freedom protest,’ is an economic and security issue now,” Harvard professor and CNN ‘analyst’ Juliette Kayyem wrote on Twitter last week as “Freedom Convoy” truckers blocked a major international bridge (which is the point of protesting — make situations uncomfortable to effect the change you seek).

“The Ambassador Bridge link constitutes 28% of annual trade movement between US and Canada. Slash the tires, empty gas tanks, arrest the drivers, and move the trucks,” she added.

Readers know that these truckers are protesting against one of the dumbest public health policies ever devised — forced vaccination for COVID-19, a virus that has a 98.5 percent survivability rate.

So for protesting against the mandate, these truckers, to Kayyem, are domestic terrorists who should be moved against forcefully because Canada is governed by the hard left and since she’s a hard-leftist then their protests are illegitimate.

Remember when Democrats and their voters were all about workers’ rights?

Needless to say, the Internet is forever so her rank hypocrisy was immediately called out.

The convoy protest, applauded by right wing media as a “freedom protest,” is an economic and security issue now. The Ambassador Bridge link constitutes 28% of annual trade movement between US and Canada. Slash the tires, empty gas tanks, arrest the drivers, and move the trucks ?? https://t.co/nvRQTfPWir 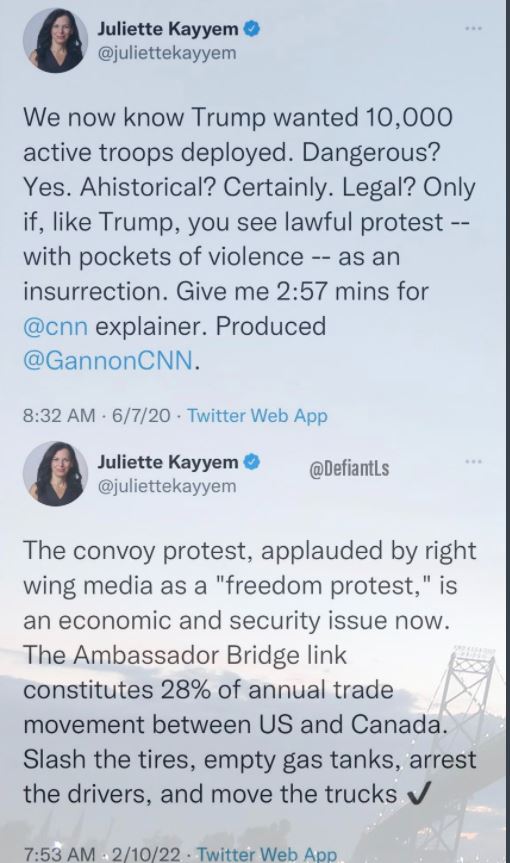 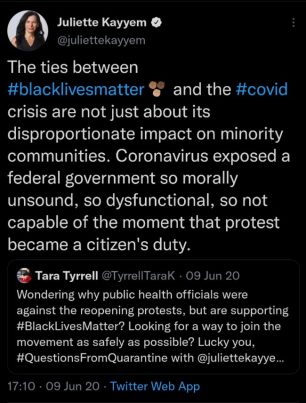 “We now know Trump wanted 10,000 active troops deployed. Dangerous? Yes. Ahistorical? Certainly. Legal? Only if, like Trump, you see lawful protest — with pockets of violence — as an insurrection,” she wrote regarding a CNN interview she did June 7, 2020, as American city blocks were being torched around the country in response to George Floyd’s death.

In another tweet a few days later, she wrote: “The ties between #blacklivesmatter and the #covid crisis are not just about its disproportionate impact on minority communities. Coronavirus exposed a federal government so morally unsound, so dysfunctional, so not capable of the moment that protest became a citizen’s duty.”

Translation: Left-wing protests and violence are okay; ‘right-wing’ freedom-minded protests without violence but with some economic pain are never okay — if you’re a fascist Nazi like Kayyem.

Needless to say, others took her to task on social media for her ridiculous insistence on flattening the tires of tractor-trailer rigs and draining them of fuel.

“Not sure I’d recommend siphoning diesel fuel or slashing a steel belted retread under 100 psi, but you’re the expert Professor Tow Truck,” pundit David Burge wrote. “I think the Fightin’ 101st Tire Slashers may need a little  training before we send ’em in.”

I think the Fightin’ 101st Tire Slashers may need a little training before we send ’em in pic.twitter.com/y9cABNCNDO

“Once we slash the tires and empty the fuel tanks, how do we remove the trucks? Easy, put on a Harvard Hogwarts robe, wave your wand, and cast the ol’ ‘Truckus Removem’ spell,” he continued.

He also called out left-wing journalist Matt Yglesias who volunteered the U.S. Marines, but not himself, to forcefully reopen the international bridge (and since half the bridge is Canadian soil, so to speak, we have to assume that this brainiac was sanctioning a U.S. invasion of our northern neighbor).

“Another bold plan from the Harvard Institute for Removing Giant Trucks From Bridges,” Burge wrote.

Another bold plan from the Harvard Institute for Removing Giant Trucks From Bridges pic.twitter.com/bp8bjAIHuT

Leftists aren’t just tyrants and authoritarians, they literally are out of their minds with hate.