(Natural News) As more countries join in the “Freedom” Trucking Convoy, where Truckers, a group necessary to the very survival of America and other countries, because when the trucks stop, so do deliveries, services, restocking foods at grocery stores, followed up by medical, water, electrical services taking a hit, we are seeing a definite line being drawn in the sand, by a variety of the global population, and here in America.

The truckers that have joined, at great risk to themselves and their own livelihoods, have done so to fight for not just their rights, but all of our rights to live free of tyranny and forced medical procedures that are still untested for long term effects.

These type of protests started over the past year

•  Medical professionals taking on the Biden regime, the CDC and Fascist Fauci

• Conservatives and Independents building their own “eco-system”

• Strikes and walkouts from workers refusing to be used as guinea pigs for the constantly increasing number of shorts, jabs and boosters the so-called “experts” claim with finally end Covid…..until the next variant is manufactured.

Those are just some small examples of the growing movement, and protests against tyranny and for freedom.

Over at the blog “The Wrong Kind Of Green,” a writer perfectly encapsulates why the left seems so “surprised” that these protests are starting to get traction, and are bigger, stronger and are uniting more people than previously known to them.

If you consider yourself on the political Left, you might be forgiven for not knowing very much about the many acts of worker resistance against the COVID-19 vaccination mandates that have taken place all around the world over the last year. This is because the professional Left media and activist class—while happy to cover traditional strike action over union contract disputes, such as with last year’s John Deere Company and the more recent Kroger strike in the United States—have completely ignored comparable labor struggles undertaken by working people over an issue which defies contemporary cultural associations; leaping over most racial, gender, and social divisions.

By making social and economic participation contingent upon the taking of a speedily-developed medical product, average members of the global labor force are being placed in a dehumanizing position—either participate in the world’s largest clinical trial, or be cast into a life of social alienation and privation. Resistance to these vaccine mandates has been expressed through walkouts, picketing, coordinated sickouts, mass resignations, and most recently in Canada, massive truck convoys. And while COVID lockdown-related supply chain backups continue to play out, such revived worker militancy is adding to the already existing crises in the shipping, healthcare, and retail industries.

Note – Australia truckers are also now protesting, while people in multiple countries are taking to the streets against the vax mandates and passports, and treating those refusing to get vaxxed as second class citizens. We are also hearing rumbles about American truckers perhaps setting up their own convoy to the capitol. 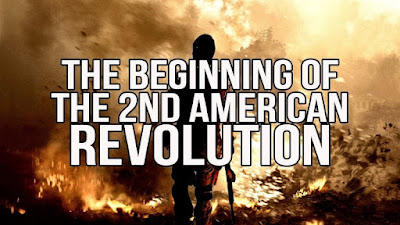 THEY HAVE NO IDEA WHAT IS COMING…

A couple of points on how dug in people are in their positions, where we see that Covid has separated freedom fighters from tyrants.

This civil unrest, protests and “tone” for lack of a better word have all been building like a crescendo of a musical passage, increasing and increasing, and we are getting ready to hit our “peak.”

It’s a freaking revolution, and the Biden regime, democrat leaders and their media puppets have been so busy attempting to dictate, intimidate, shame and threaten Americans for not toeing their liberal tyrannical lines, that they themselves haven’t realized the extent of what has been happening right under their noses.

A Scottsdale school board was just served at a board meeting, as one women attempts to stop the legal papers from being handed to the board members.

Leigh Dundas and Miki Klann speak to the Scottsdale Unified School District in Arizona. During the meeting, Miki declares her intention to file a claim against the Governor’s surety bond on behalf of the SUSD board members. Each member of the board will be charged with practicing medicine without a license, child abuse, segregation and inappropriate sexual material in the school libraries.

Another example of just how badly liberal Democrats are “reading the room,” is the whole Joe Rogan controversy.

Long story short: Rogan has the most popular podcast on Spotify, who reportedly paid him more than $100 million for exclusivity of Rogan’s podcasts,

Has-been singer Neil Young decided that Rogan had no right interviewing renowned doctors and professionals that do not toe the COVID narrative, so he threatened Spotify that it was either Rogan’s podcast (which boasts 11 million listeners), or young, which doesn’t even bring that many listeners in a month or three or more.

Well…. usually, something like this happens and within a few days no one would remember what Young said, what happened, and even less people would care about it.

In this case, the entire issue highlights how dictatorial some are that they want Rogan canceled, but surprisingly others have drawn a bright red line in the sand between freedom and tyranny.

After Rogan finally responded to the whole fiasco, as older singers and names that many these days have never even heard of, joined Young in pulling their music from Spotify, other high profiles names came out in support of freedom to bring both sides of a narrative to the table, whether one agrees with the point of view or not.

Below are some of the supportive messages to Rogan: 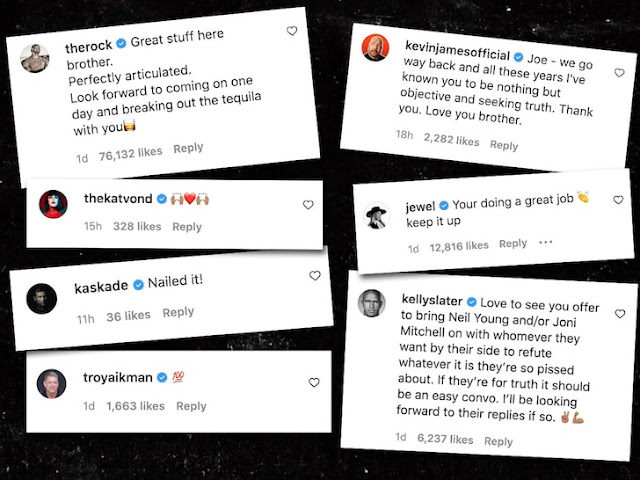 This small example shows the gap between those fighting to lock us down, control our medical decisions and those willing to step up and speak out, and do what it takes for freedom, is widening to the point where despite living in one country, we are seeing a division between two “nations,” the red nation for freedom and the blue nation for manadtes and tyranny.

Hollywood has always had quiet conservatives and loud and obnoxious liberals always trying to use their “fame” to influence the public, but apparently Covid has changed that as well, as we are seeing freedom loving celebrities, stand up against their tyrannical counterparts.

We have seen ideological, political, race and class divisions in America as long as I can remember, but the last two years of Covid battles have brought us, as a nation, to a point where the “left” is exposing their authoritarian tendencies and desires, and the “right” is finally standing up and joining the fight, rather than sitting back and thinking common sense will eventually prevail, then wondering why they lost yet another culture war.

Common sense is no longer common.

That is a lesson we have learned since Covid.

Liberals are also learning that the “right” is no longer content to play by the left’s rules of engagement and are willing to go scorched earth to fight for freedom.

Their  temper tantrums are a direct result of that particular lesson.

The cry-bullies of America, and globally, truly have no idea what is coming for them, because we are no longer willing to play by their rules.

Listen toward the end of the the video below for the message from a tow company to the requests to move the trucks for authorities. Read more at: AllNewsPipeline.com
Previous :Pedophilia is misunderstood, USA Today claims, then deletes tweets
Next : Senator who took donations from Big Pharma blocks vote on bill to lower drug prices
Receive Our Free Email Newsletter

Newsom wants to spend $11 billion to give Californians $400 gas cards, throwing more incendiary money into an already inflationary economy
ABORTION WELFARE: Getting an abortion in California is now “free,” thanks to Gavin Newsom
Dr. Scott Atlas laments the damage caused by COVID lockdowns, medical tyrants
Investigation proves Hunter Biden FUNDED the illegal biolabs in Ukraine
Canadian authorities find they are unable to seize Bitcoin donations made to Freedom Convoy protesters
3 Milwaukee officials named as defendants in 2020 election bribery case
Holly Jones tells Tom Renz: Every American can do something for America – Brighteon.TV
New poll shows Republicans sweeping Midterms: 75% of swing-voters think Democrats are “out of touch” and “condescending”… spend too much money
Putin puts Biden’s king in check
Washington is driving the world to nuclear war