As a global, end times war nears, despotism is being ramped up in America: Expect armed guards outside of purebloods homes and ‘COVID camps’ in their war upon Americans

(Natural News) We should not be surprised at the uptick of authoritarianism from Democrats as a global war hangs over our heads.

For years we have seen liberals screech the word “NAZI” at Republicans, claiming they were authoritarians that want to take freedom away from Americans, and the propaganda arm of the Democrat party aka the MSM, helped push the message day in and day out.

Then covid came along and it became clear by comparing liberal state leaders with conservative state leaders. One side advocating choice and freedom while the other side pushed mandates, threatened those that disagreed, censored even the debate of the efficacy of the existing COVID-19 vaccines, fined people refusing to wear masks, closed down businesses of those state/city leaders deemed “non-essential,” turning a virus, a pandemic into a worse problem of poverty, food shortages, hunger, and economic suicide.

We have documented the authoritarianism of liberal state and federal leaders with their mandates, their decrees, their constant attempts to force Americans to comply with their will, with only the courts standing between loss of freedom and freedom.

We have also reported on the walking brain dead that allows the media to control their every thought and action.

What we are seeing now though….. is the result of a two-year long fear campaign by liberals, democrat politicians and the media, where Democrats across the country are proposing options that truly sends chills down my spine. 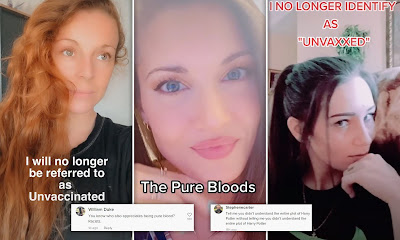 THEY WANT ALL ‘PUREBLOODS’ LOCKED UP

Videos of the pro-mask Karen freakouts, like the one shown below have shown us how unhinged the rhetoric and propaganda has made certain Americans, but the level of authoritarianism shown in the most recent Rasmussen poll published on January 13, 2021, shows without a doubt that the majority of Democrats in America have dictatorial tendencies.

First the video of a mask freak, without her mask on, attacking, verbally and physically, an older man for not wearing his mask while eating.

After seeing that it is not hard to image fringe radical liberal Karens wanting to see the unvaxxed also known as “purebloods” advocating locking up those that refuse the vaccine which we are still learning the side effects from and the long term effects, but the percentage of Democrats supportive of some of the most dystopian and tyrannical ideas, makes it clear that now, the majority of those calling themselves Democrats …… are now the radicals.