(Natural News) Reuters rushed to spin Pfizer CEO Albert Bourla’s recent comments on his company’s vaccine in a so-called “Fact Check” and failed to disclose that a senior executive in the Reuters apparatus happens to sit on Pfizer’s board of directors.

Reuters attempted to fact-check a video circulating of Bourla on Yahoo! Finance on the efficacy of his vaccine against the Omicron COVID-19 variant. Bourla made a revealing statement that “two doses of the vaccine offer very limited protection, if any. The three doses with the booster — they offer reasonable protection against hospitalizations and deaths,” but “less protection against infection.” Reuters tried to slap down people on social media who were pointing out alleged discrepancies between Bourla’s Jan. 10 statements and previous comments he made in 2021 touting the Pfizer vaccine’s alleged overwhelming protection against infection.

Reuters was quick to say that Bourla’s comments on Yahoo! Finance were specific to the Omicron variant, and didn’t downplay the vaccine’s efficacy against other variants. Such a distinction appears irrelevant, however, because Omicron “now makes up nearly all sequenced [COVID-19] cases in the U.S.,” according to CNBC. Bourla’s comments also appeared to move the goalposts for recommended protection measures that Americans should take against COVID-19 as his company is now reportedly recommending a “redesigned COVID-19 vaccine that specifically targets the Omicron coronavirus variant” in addition to previous shots.

But it appears Reuters may have a vested interest in protecting Pfizer’s credibility. The chairman for the Thomson Reuters Foundation Board of Trustees, James Smith, just happens to sit on Pfizer’s board. Reuters did not disclose the glaring conflict of interest in its pro-Pfizer write-up at all. The Thomson Reuters Foundation is the corporate foundation for Reuters. The Society of Professional Journalists’ Code of Ethics clearly states that journalists should “[a]void conflicts of interest, real or perceived. Disclose unavoidable conflicts.”

But Reuters wasn’t the only one to omit context about a conflict of interest while accusing Twitter users of “missing context.” Twitter plastered a big notice on its platform that Bourla’s comments were taken “out of context,” and cited Reuters as one of its sources. Twitter did not reveal that Smith was on Pfizer’s board and also left out important context. Bourla specifically said that “two doses of the vaccine offer very limited protection, if any,” which suggests that there could be no protection at all against Omicron from two doses of the Pfizer vaccination. [Emphasis added.]

Twitter left the “if any” part out of its summarization of Bourla’s comments in what appears to be an attempt to cushion the impact of what he said:

Bourla said that three doses of the Pfizer vaccine offer reasonable protection against hospitalization and death due to the Omicron variant of COVID-19, and that two doses offer only limited protection from specifically the Omicron variant. His comments were misrepresented and circulated online, according to Reuters and Snopes. 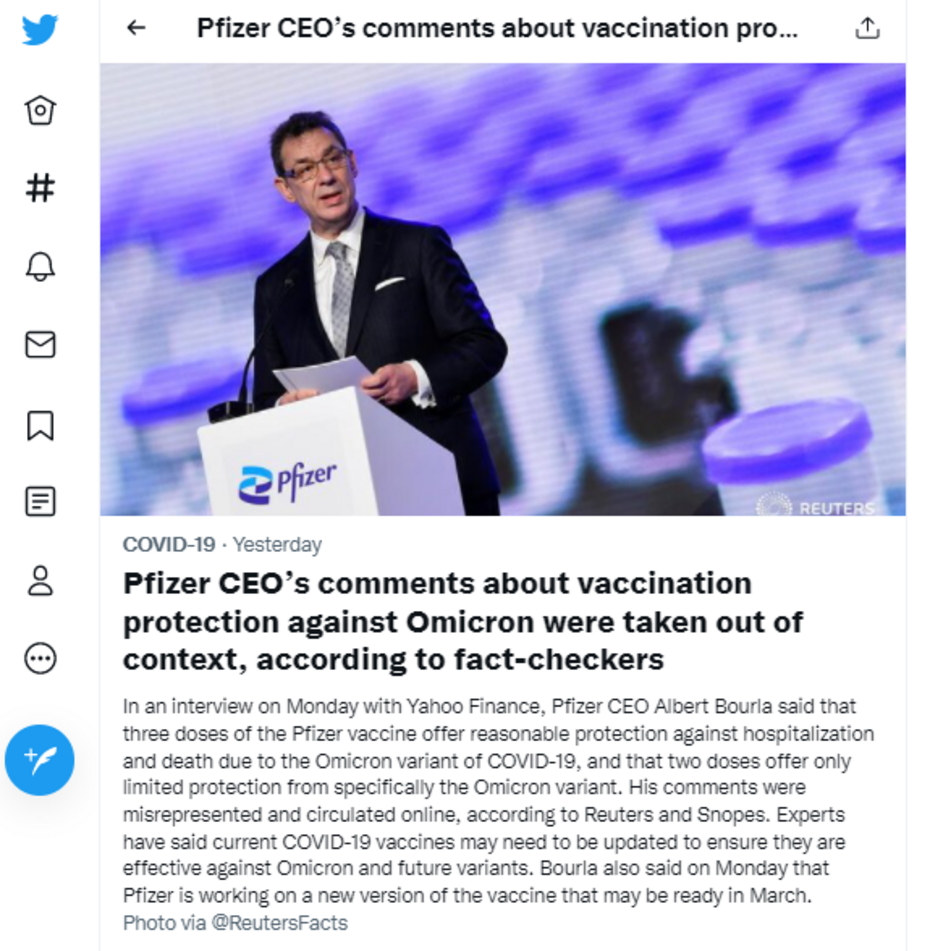