(Natural News) The Los Angeles Times published an article by columnist Michael Hiltzik which says mocking the deaths of anti-vaxxers is “necessary”.

As Chris Menahan notes, the URL of the original article suggests the first headline was even worse and that it was subsequently changed by an editor.

The first incarnation was called ‘Why Shouldn’t We Dance On The Graves of Anti-Vaxxers?’ 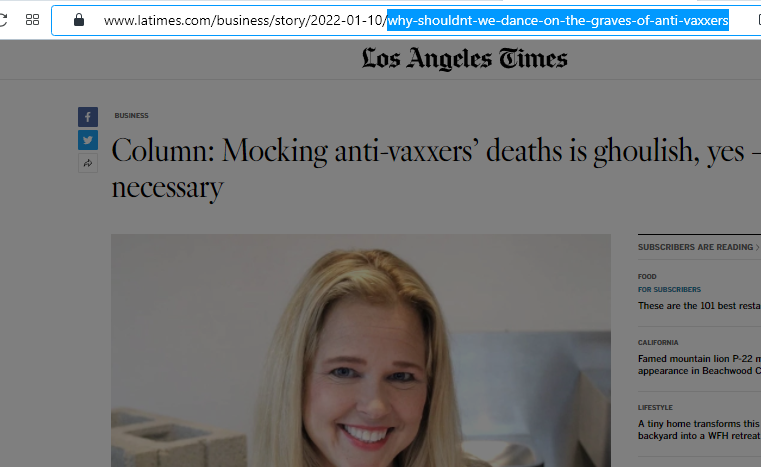 The headline was changed to ‘Mocking anti-vaxxers’ deaths is ghoulish, yes — but necessary’.

Its final incarnation is now published as ‘Mocking anti-vaxxers’ COVID deaths is ghoulish, yes — but may be necessary’.

The constant watering down of the headline clearly suggests the newspaper was trying to minimize the inevitable backlash that would ensue.

The bulk of the piece focuses on mocking the death of conservative activist Kelly Ernby, who campaigned against mandatory COVID vaccines for children as a condition of going to school, but subsequently died from “COVID complications.”

“Kelly Ernby’s friends and family ask us to remember her for her career as a public servant and as a devoted spouse and mother. But let’s not mince words: Her campaigns against public health measures negated whatever good she may have done in her other endeavors,” writes Hiltzik.

“The policies Ernby advocated may well have contributed to the spread of COVID and to the damaging of the public health infrastructure in her own community. Even before this pandemic, she spoke out for measures that would threaten California schoolchildren with exposure to deadly childhood diseases. There were no scientific or medical grounds for her opposition to mandates; there was only political ideology.”

The columnist goes on to assert that the media should shine a spotlight on the deaths of people who ask questions about COVID vaccines and other lockdown measures, as if they don’t relentlessly do that anyway.

“But mockery is not necessarily the wrong reaction to those who publicly mocked anti-COVID measures and encouraged others to follow suit, before they perished of the disease the dangers of which they belittled,” he adds.

Imagine if people who campaigned against mandatory vaccinations mocked the deaths of people who died from vaccine side-effects?

They’d be treated as monsters by the media, as should Michael Hiltzik for his disgusting diatribe.