(Natural News) A pair of billionaires who have ‘God’ complexes have teamed up to form an organization they claim fights “disinformation” but instead is used to discredit real sources of news exposing globalist corruption.

The Gray Zone noted at the time:

On its website, Good Information describes itself as a “civic incubator” aimed at fostering and financially backing projects that “counter disinformation where it spreads by increasing the flow of good information online.”

But more than merely providing an alternative to bad information through their own reporting, the company suggests that censorship is also on the menu…

“We believe there is an urgent need for regulation of social media platforms,” the organization’s website states.

And just what is ‘good’ and ‘bad’ information? Obviously, it is whatever that organization and the media minions it funds say it is. Like, for instance, when, for years, mainstream outlets claimed that Trump was in cahoots with Russian President Vladimir Putin to “steal” the U.S. election from Hillary Clinton and then ‘manipulate’ the electorate for Trump’s own benefit. That was a lie from the very first report; even the highly partisan Robert Mueller witch hunt found nothing (because there wasn’t anything to ‘find’).

But now, Soros and Hoffman have formalized disinformation under the guise of defending ‘truth.’

Billionaire “philanthropist” George Soros has weaponized his vast wealth in support of US foreign policy for several decades. Following the collapse of the Soviet Union and later the unraveling of the socialist bloc in Eastern Europe, The Washington Post celebrated Soros as a member of a “new network of overt operators” supporting “pro-democracy activists” and media operations in place of – and alongside – the CIA.

Continuing his anti-communist crusade into the 21st Century, Soros has sponsored color revolutions and information warfare campaigns against designated US enemies from Hong Kong to Syria to Russia.

Mostly, this meddling has come in the form of left-wing information operations, meaning, of course, that U.S. foreign policy has long been broadly left-wing. Now, with Good Information Inc., Soros and Hoffman, the latter of whom has also done his fair share of election meddling, are bringing this information warfare operation to the United States, where they will, once again, back the left’s broad objective of ruling in perpetuity.

“Hoffman was the money man behind Project Birmingham, a covert disinformation operation devised by a tech company called New Knowledge which aimed to depress voter turnout among Republicans during Alabama’s 2017 special senate election,” The Gray Zone’s Alexander Rubenstein wrote. “The operation created a Facebook page for a previously unknown Republican candidate and promoted him to the media to divide the GOP vote.”

In that race, it was discovered that Hoffman’s cash was used to “orchestrate an elaborate ‘false flag’ operation that planted the idea that the [Roy] Moore campaign was amplified on social media by a Russian botnet.” 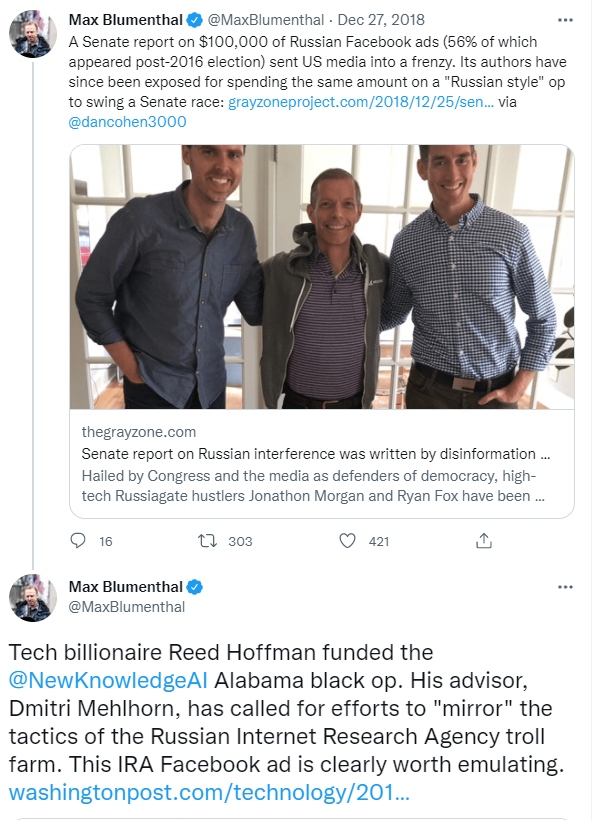 The New York Times performed its role by ‘duly reporting’ that yes, Hoffman did fund the Facebook campaign, but only as an “experiment in the Alabama Senate race.” Nothing to see here; just your ordinary, run-of-the-mill, CIA-type information warfare being conducted on home soil. Nothing to see here.

That’s not all. Blumenthal and Soros teamed up again to ensure that Joe Biden won the Democratic primary by sacking ‘Independent’ [Communist] Sen. Bernie Sanders of Vermont.

“Hoffman bankrolled a dark money outfit called Acronym (also funded by Soros) which launched a dysfunctional digital vote counting system, Shadow App, that helped upend Bernie Sanders’ apparent win in the Iowa Caucus,” The Gray Zone reported, noting that then-Democratic presidential contender Pete Buttigieg managed to eke out a win days later, but of course, he was never going to get the nomination, either.

Biden the Mindless was pre-ordained.

This was done to Sanders during the 2016 campaign in order to hand the nomination to Hillary Clinton, which begs the question: Why does Sanders continue to caucus with a party that abuses him?

In any event, Soros and Hoffman’s “Good Information Inc.” is just another info-warfare operation aimed at pushing the left’s globalist agenda, nothing more.