Once you realize the US government is an organized crime syndicate, everything makes sense

Axios released an article today detailing that half the unemployment aid issued over the past year was sent out of the country to foreign criminal organizations.

The free for all which was the Paycheck Protection Program (PPP) shockingly sent millions to Chinese state-owned corporations overseas. This is in the public record.

You see, once you realize the current rendition of the U.S. government is an organized crime syndicate of massive proportion, in control of the national security apparatus, everything that is happening immediately makes sense. 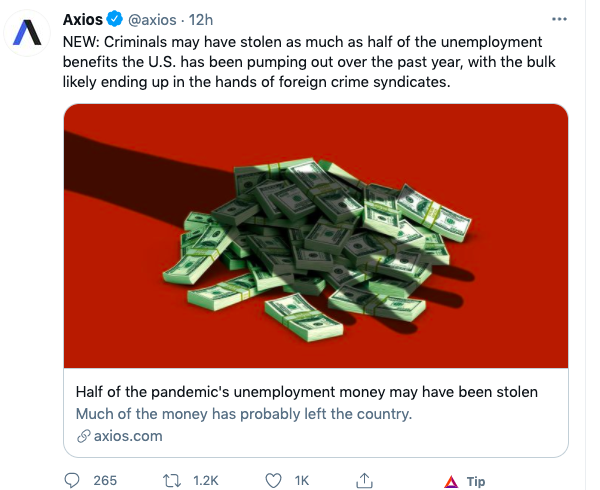 CDMedia wrote weeks ago that our sources informed us the alleged ‘ransomeware’ attack on the Colonial Pipeline was not a foreign operation, but likely executed by domestic entities for monetary, or political gain.

Some have entertained the thought of internal strife between U.S. government agencies, essential criminal gangs, reaping the benefits of organized money laundering on a massive scale.

Now we learn the FBI reportedly seized the millions of Bitcoin paid by Colonial pipeline for the alleged ransom.

Was the hack solved so quickly because there’s a power struggle between the FBI and the CIA going on? In that story, did the CIA hack the pipeline and the FBI decide to punish them?

In Russia this is common. Different security agencies of the Russian secret services are in regular competition for illicit gains. The FSB regularly takes over businesses to reap ill-gotten profit. Corruption is what the Russian system is built upon.

This is what Obama and his minions have brought here.

Think about it, if parts of the U.S. government are in bed with the Chinese Communist Party, looking to rape the American people of trillions of dollars, agriculture, energy, and so on, then the entire Russia! Russia! Russia! hoax makes perfect sense.

Blame it all on the rival criminal gang!

And, the Deplorables pay for it all!

The government shouldn’t force young adults and teens to take experimental coronavirus vaccines, says inventor of mRNA vaccines
Once you realize the US government is an organized crime syndicate, everything makes sense
Fauci lied about email releases, said he had “no control” while rules revealed he “personally reviewed each one”
San Francisco forcing 35,000 city employees to get COVID-19 vaccines
When the state comes for your kids
Portland police to halt traffic stops due to inadequate staff after being defunded by Leftists
Maryland, Montana first states in country to restrict police from accessing genetic databases
The CCP is vulnerable and its rule could end with a coming coup: Expert
WATER WARS about to go kinetic in America as farmers targeted by “terrorist” state governments that are deliberately collapsing civilization
Democrats now openly calling for government confiscation of 5% of the wealth of those Americans who have earned the most… and next it will be 20%