Media, social media propaganda collusion to censor truth has backfired as multiple “conspiracy theories” have been proven true over the last few days

(Natural News) When President Trump referred to the COVID virus as “Wuhan virus” or Chinese virus, he was accused of racism (no big surprise since everything is considered racist these days).

The establishment media bent over backwards to claim anyone asserting the pandemic started in the Wuhan, China lab, was a “conspiracy theorist.”

Social media blocked and banned any commentary that did not fit that official narrative.

The same playbook was used for the Hunter Biden scandals before the 2020 presidential elections, and the data on the Dominion machines used for election and the election irregularities attributed to “human error.”

In each of those examples, and more, we see the same claims by the media, then social media companies in coordination with the media would prevent users from sharing their opinions, debate the issues or even talk about the topics at all if they were not pushing the same propaganda as the MSM.

Now after hundred or even thousands have been blocked, banned, shadow banned, terminated and censored by YouTube, Twitter and Facebook, over their vaccine coverage, or COVID origin coverage or Hunter Biden coverage, we see these topics are now being openly talked about after the truth, which those darn “conspiracy theorists” were censored from sharing before, was exposed.

Related from WSJ: Wuhan Lab Theory Is a Media Warning

Via ZeroHedge, we see the issue laid out in a very succinct manner, regarding 18 months of “journalistic malpractice,” which now has the media scrambling to stealth edit their initial coverage in order to not look like they had been pushing Chinese propaganda unto the American people.

For nearly 18 months, the mainstream media engaged in journalistic malpractice – quashing any suggestion that COVID-19 could have originated from the Wuhan Institute of Virology, because their arch-nemesis, former President Trump, dared promote this very logical conclusion. Let’s also not forget the deep ties Beijing has formed within the United States, which include universities, entertainment, sports leagues, and of course, Washington DC and its liberal surrogates.

So of course, once the lab-leak theory began to circulate in January, 2020, China’s ‘investments’ in the United States paid off, and the entire liberal media industrial complex furiously peddled the ‘natural origin’ theory, while boldly proclaiming the lab origin hypothesis a ‘debunked conspiracy theory.’

That was until the last two weeks, starting with Sen. Rand Paul (R-KY) shredding Anthony Fauci over the NIH funding US research within the Wuhan lab, followed by a Wall Street Journal report that three WIV lab workers were hospitalized in December 2019 with COVID-19 symptoms.

Politifact was forced to retract their “pants on fire” rating to a doctor who claimed last year COVID-19 is a “man-made virus created in the lab.”

Facebook has done an about face and supposedly stopped banning or blocking people from talking about the lab creation of the pandemic.

Showing that Facebook, and Mark Zuckerberg have learned absolutely nothing from their utter fail in their decision to limit or forbid any discussion of the lab creation of the Wuhan virus, is also announcing that they will “unperson” those spreading misinformation.

While folks should not be spreading deliberate misinformation, Facebook has already proven with their censoring of the Wuhan lab discussions, along with banning people for reporting on the Hunter Biden scandals before the election, that they have no clue how to determine what is or is not misinformation.

In other words, they banned and censored people for wrong think, because it didn’t match the media narrative, then they started allowing those discussions because the media could not hide the truth any longer, yet they still plan to ban folks for speaking up regarding MSM propaganda.

Social media giant Facebook has announced that it will now be “reducing the distribution” of individual accounts that share misinformation across its platform, even as the Masters of the Universe and their army of “fact-checkers” struggle with the definition of misinformation on topics such as the origins of the coronavirus pandemic.

Of course some in the media are not happy that Facebook is not censoring the Wuhan lab story any longer, claiming it will lead to anti-Asian discrimination.

It may or may not, but a normal person does not attack those of Asian ancestry just because a Chinese lab allegedly created the COVID-19 virus.

More importantly the truth, debate and discussions should not be throttled because some ignorant people may or may not attack others.

The Washington Post worried in a new report that Asian-Americans could be harmed with Facebook now allowing posts that claim the coronavirus was manmade.

“The reopening of debate presents challenging issues for Facebook because the claim has also been associated with a wave of anti-Asian sentiment,” the Post reported Friday, in a story headlined, “Facebook’s reversal on banning claims that covid-19 is man-made could unleash more anti-Asian sentiment.”

You really cannot make up this type of lunacy.

Related: The Most Terrifying Democrat Headlines…That Have NOT Come True 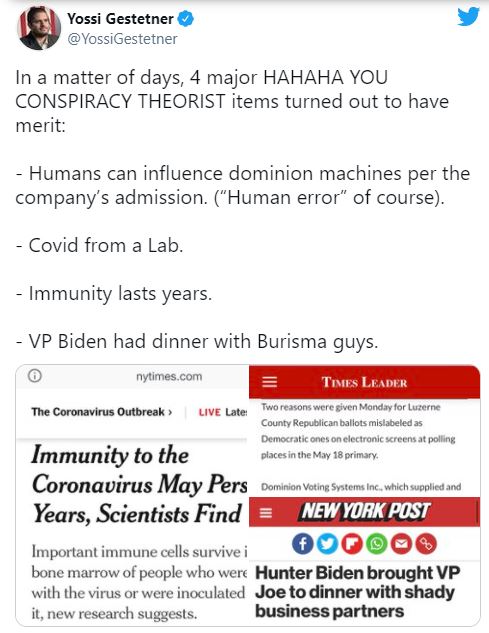 It is bad enough when it is just one important story, or theory, or debate that is being stifled because the media and social media are colluding to keep the truth from the public or even just a discussion of whether something is true or not, but when you see multiple different media/social media narratives implode in a manner of days, you realize that nothing, no topic small or large, reported by the media can be believed in any way, shape or form.

It isn’t a matter of the media not be trustworthy on any one specific topic, they cannot be trusted at all, in regards to any topic.

At this point it appears that if the media is correct about something, it is usually an accidental act of real journalism, rather than real investigative journalism.

For Big Tech, the debate on whether to break up the companies, strip their 230 immunity protections or regulate the hell out them, is ongoing and getting closer and closer to becoming a reality, especially after a disastrous week for both the MSM and social media.

The media on the other hand… there must be a way to hold them accountable.

In some areas, that too has begun.

CNN and MSNBC, two of the most liberal propaganda networks, has seen massive drops in viewers.

CNN’s drop in viewers is larger than its competitors, but all major cable news shows have experienced a drop. MSNBC had the second-largest drop in viewership since January, losing 49% of its total viewership between January and May. In the 25-54 age demographic, the network lost 63% of its viewers. During primetime hours, MSNBC lost 42% of its total viewers and 58% of viewers between the ages of 25 and 54.

Many believe that without president Trump to obsess over, the media has nothing left to whine about on a daily basis, but other factors, including their fake news incidents and the blatant Democrat propaganda push, has most definitely cost them much of their audience as most do not trust them at all anymore to be honest and truthful and unbiased.

Multiple “conspiracy theories” that the media mocked and claimed were “fake news,” have no garnered enough of a consensus to either prove they are true or to warrant an in depth investigation.

The media and social media are now directly responsible for massive stories being hidden from the public, making their audiences some of the most misinformed Americans in the nation.

And they wonder why the levels of trust for their industries are at rock bottom.

Read more at: AllNewsPipeline.com and Truth.news.

Facebook admits in court that its “fact checkers” are just truth censors
12 worst cases of Big Tech censorship in 2021
Rumble severs business ties with Unruly Group and Tremor International (TRMR)
How Wikipedia changed me from being a good guy into an evil person
Dr. Oz, now a Republican candidate for the Pennsylvania Senate, is getting censored on Facebook after criticizing “Lord Fauci”
The Health Ranger talks about satphones and emergency satellite text messaging with Chris Hoar – Brighteon.TV
Disney cowers to China, omits “The Simpsons” episode featuring Tiananmen Square
Biden administration shows true colors: White House censors Taiwanese minister over a map showing China and Taiwan in different colors
Climate change propagandist Michael Mann calls for total censorship of anyone who disagrees with him (op-ed)
Fact checks? More like opinion pieces from far-left ideologues