‘There is a perfect storm forming’ experts warn as the national media ignores the big picture on the growing list of shortages that are expected to get worse, not better

(Natural News) While the number of people learning to “prep” by stockpiling, food, water, medical supplies and other basic necessities is increasing, especially during the economy-killing pandemic lockdowns, there are still shortages occurring now and much more on the horizon.

The establishment media is periodically reporting on these current and upcoming shortages, but by and large they are completely ignoring the bigger picture of what is coming, in favor of playing politics, media activism, and pushing Democrat propaganda.

Everything from items served in cans, to chicken to imported food products are all still suffering shortages, which are getting worse, not better, due to the ongoing supply chain shortages in other areas.

For example, the electronic “chip” shortages causes other down the line, such as long delays and rising prices for appliances, cars, computers, etc….. you get the point.

Add in the drought towards the west, and the February freezes and we are looking at shortages and price spikes that will rival 2020, and may even be worse since the shortages are causing trickle up and down shortages in other areas.

Multiple different websites are reporting supply issues and further expected shortages, so we will start with items folks should be stocking up on now, that maybe should be gotten from a local store, if needed, now rather than later when either the supply is gone, or the prices are so high it is frightening.

STOCK UP, THINGS ARE GETTING WORSE, NOT BETTER

Gas, lumber,  furniture, cars… those type of products are all seeing delays and price hikes, and getting an appliance could take weeks, if not months in some places, due to issues obtaining the parts to manufacture those appliances.

Other items may still be available in your local stores, and if not, they are still available for delivery, although some are already seeing price hikes.

When I write things will get worse, not better, it is because on top of the pandemic shortages the lockdowns created, we have conditions here and around the globe that are all contributing factors.

According to reports we are looking at a logistical nightmare:

For anyone who thinks it’s all going to end in a few months, consider the somewhat obscure U.S. economic indicator known as the Logistics Managers’ Index. The gauge is built on a monthly survey of corporate supply chiefs that asks where they see inventory, transportation and warehouse expenses — the three key components of managing supply chains — now and in 12 months. The current index is at its second-highest level in records dating back to 2016, and the future gauge shows little respite a year from now. The index has proven unnervingly accurate in the past, matching up with actual costs about 90% of the time. 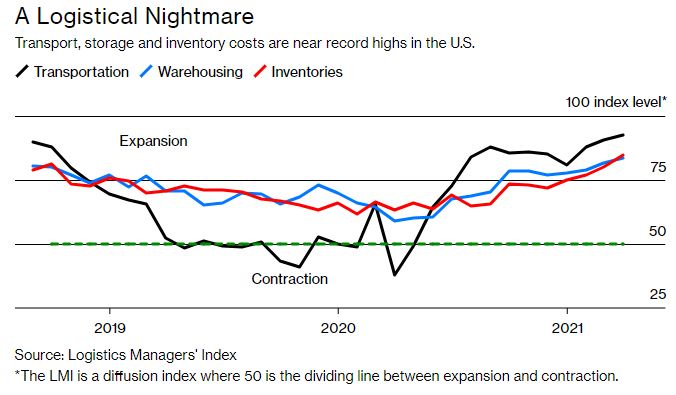 As an example of this trickle down effect, Axios reports on spiking corn prices and the reason for it.

• The price of corn is surging at a record pace. Prices have risen by 16% so far this month, the largest monthly gain since May 2019, and have risen every month since July, unleashing a 43.7% gain so far this year, per FactSet.

• As commodities like lumber and copper see prices sky higher and global food prices continue to soar, the price of corn is especially important because it is a major input for everything from gasoline to meat to industrial products like wallboard and insulation used in houses.

• Major corn and soy producers like Brazil and Argentina have been experiencing labor shortages as a result of the coronavirus pandemic and unseasonably bad weather has hurt crop yields, resulting in a shortage of supply at precisely the same time as the spike in demand.

The kicker is that American crops may not be able to fill the void.

The big picture: If American crops aren’t able to fill the void, prices could well jump further out of control, Shelby Myers, an economist at the American Farm Bureau, tells Axios.

U.S. farmers are in a prime position to benefit from the situation but cold weather in the Midwest that has been followed by drought conditions is making planting an uncertain proposition.

At this point we are recommending to stock up on freeze dried corn, with a long shelf life. A handful can be used at a time to add to soups, stews, or use as a side dish.

Previous :Oregon is proof that leftist politics ultimately lead to tyranny and decay
Next : Sweden goes from being one of the safest countries in Europe to the second most dangerous
Receive Our Free Email Newsletter

Paul Craig Roberts: America is erasing herself
Biden, Democrat spending primarily to blame for runaway inflation that’s only going to get worse
If you are surrounding yourself with appliances, robots and gadgets that depend on the cloud, you are begging for disaster
Ben Armstrong tells Mike Adams: Biden’s vaccine mandates precede the collapse of America – Brighteon.TV
World Economic Forum simulates global cyberattack that could bring about “Great Reset”
Beverly Hills residents arm themselves and form self-defense groups to counter rising violence
Hospitals are retracting their COVID-19 vaccine mandates due to federal court rulings and labor shortages
Flurry of active volcanoes will cause global COOLING and crop failures… global financial and political systems on the verge of catastrophe
California proposes sharp reductions in subsidies for residential solar customers
Billionaire anarchist George Soros’ org has been caught funding “dark money” group that pushes for defunding police