(Natural News) Millions of consumers around the world have been hoodwinked by the “Non-GMO” product label, and to this day, have no clue that the quality of the majority of those products is nothing even close to organic. The whole goal of eating healthy is to avoid foods that are contaminated, and that way you also get the most nutrients possible. The “Non-GMO” label, such as the popular “Project Non-GMO Verified” label, can be affixed to food products that still contain “biosludge” biological waste, which can include syringes, blood vials and pathogens from surgical wraps and Petri dishes used to develop dirty vaccines, including COVID-19.

There is one good reason to buy food that is labeled “Non-GMO,” but there are about 10 blaring reasons not to. This is why you should only buy organic food or locally (or self-grown) food that you can be sure is not loaded with contaminants. If you buy local, ask the growers a few key questions. Let’s start “digging” into the massive difference between just “Non-GMO” and organic, clean food.

Mountains of scientific research prove that glyphosate, the key active ingredient in the world’s most widely-used toxic herbicide (that accounts for about 50 percent of the product), causes cancer, kidney failure and liver failure in animals.  This is allowed in “Non-GMO” foods. 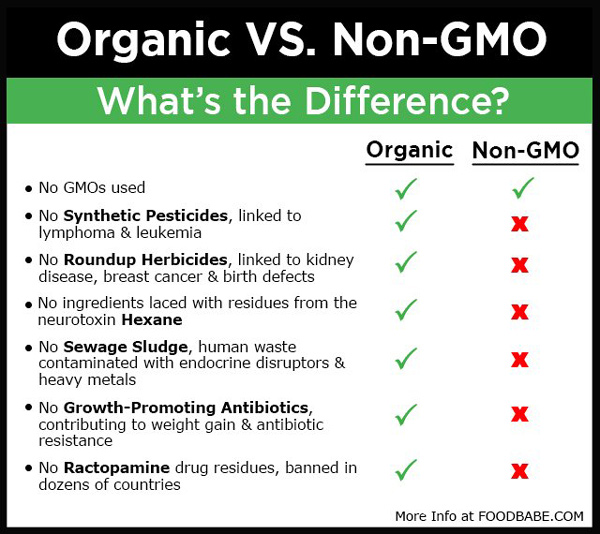 The difference between “Non-GMO” and conventional food is that the farmers (or biotech giants of the industry) can’t use their genetically modified seeds, which are immune to deadly Roundup, but they CAN still spray the crops with Roundup, and this is done for several reasons, not just to kill weeds. Roundup contains glyphosate and thousands of other synthetic, chemical-based contaminants that make glyphosate penetrate the leaves and outer layers of produce.

Also, Roundup is used as a drying agent, a week or two before harvest, so the wheat, rye, oats, barley and other grains won’t grow mold and fungus in the storage silos. Roundup accumulates in the human body, the more you eat it, and causes kidney disease, breast cancer, liver tumors and even birth defects.

These biotech and corporate companies couldn’t care less about human health or environment sustainability. It’s all about the money, and these biotech companies also invest in chronic sick-care companies that are so wealthy in the USA, especially. That’s why they like consumers thinking the “Non-GMO” label means ‘healthier’ food, when it’s only an inkling of a difference from standard, conventional crops and produce, which are for the most part, deadly for humans.

Stop and think deeply about the difference between organic food and “Non-GMO” labeled food, and you will understand the world of difference that it makes in being healthy now and over the long term, versus being sick now and sick over the long term. This is the definition of longevity without medications versus the definition of chronic sick care that ends life early (and expensively).

Non-GMO foods can contain synthetic pesticides, toxic herbicides, residue of hexane (a gasoline vapor constituent), human waste and hospital bio-waste (a.k.a. bio-sludge), growth hormones, antibiotics and even the insidious Ractopine drug, that the US industry loves but is outright banned in most other countries around the world.

Over time, these chemicals and food contaminants will eat you alive. They warp your cells and turn them into cancer cells that turn and attack your healthy cells. There is no cure for cancer that you feed every day. Here’s the ultimate example – hexane.

If you don’t think you’re eating hexane, just take a look at most conventional oils and “Non-GMO” oils, including soybean, canola and corn oils. Research reveals that hexane residue is found in products after processing and is going right into human mouths. From lab to stomach. Here’s what it does to you.

First off, hexane is classified as an air pollutant by the EPA. Short term or ‘acute’ inhalation causes nervous system problems, so now get ready for what hexane does to you when you eat it. Classified as a neurotoxin by the CDC, hexane brings health hazards into your body that you don’t want to mess around with. It can lead directly to severe abdominal pain and impact your respiratory system at the same time. Your mouth starts burning, then you begin coughing uncontrollably, then your throat and chest burn, leading eventually to chemical pneumonitis (chronic irritation to the lungs).

Go organic and leave the non-GMO on the shelf.

Previous :The 10 most popular Western “medicines” and treatments that FAIL to heal you… and how they make health matters WORSE in the long run
Next : Mask wearers now feel paranoid, angry, confused and stupid
Receive Our Free Email Newsletter