BEWARE: There are many so-called ‘conservative’ sites, like the one shown below, that are popping up all over the place, as they have since Donald Trump’s 2016 election.  All of these ridiculously fake news websites, in the aggregate, have served to profoundly undermine the credibility and integrity of the Patriot Movement and much larger Truth Movement. 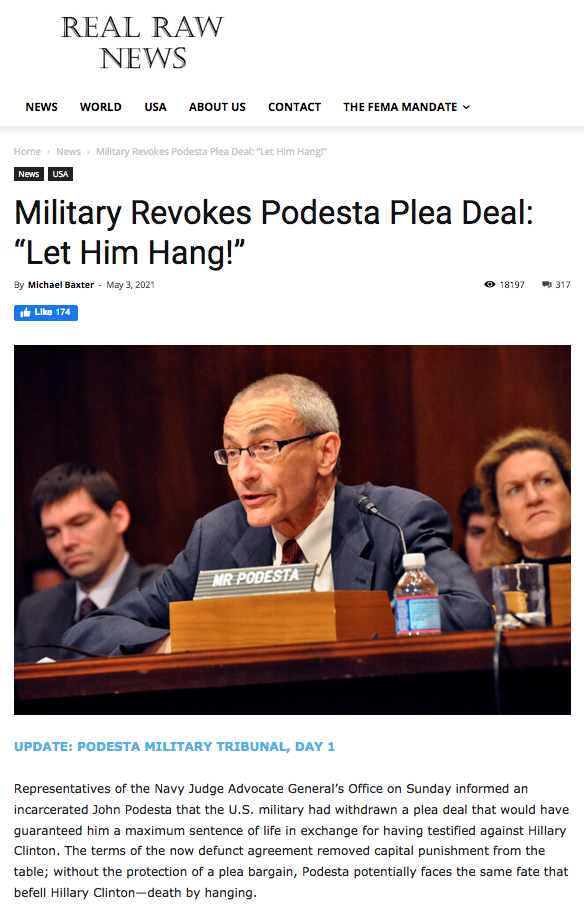 Even a cursory perusal of the numerous articles posted at Real Raw News indicates that this fake news site is funded and staffed by agents of the CIA’s Mockingbird Media. And, all anyone has to do is read one article such as this post to understand how utterly ludicrous the content really is: Military Revokes Podesta Plea Deal: “Let Him Hang!”.  However, in spite of so much obvious falsehood, it is still believed by millions of truth-seeking Patriots.

Bear in mind that millions of Patriots and Conservatives hang on every word of these nonsensical pieces of Hope Porn propaganda and prevarication.  The vast majority of articles do concern “draining the swamp”, the “capture and prosecution of the child traffickers” and “restoration of Donald Trump to the U.S presidency”, all of which are necessary and noble endeavors.   But, all of these CIA-directed websites are literally making up stories out of thin air so folks on the Right will incorrectly believe the American Republic is being saved under the radar when, in fact, it’s undergoing a free-fall collapse under the highly destructive and ever-treasonous Biden-Harris administration.

The CIA’s Mockingbird Media has been around much longer than most people are aware of .  In point of fact, the entire Mainstream Media was completely taken over post World War II when the Central Intelligence Agency, also known as The Company in global intelligence circles, was created on July 26, 1947.  It’s precursor was the Office of Strategic Services (OSS), a wartime intelligence agency of the United States during World War II whose primary missions were to gather intel by any means possible and deceive the enemy by all means necessary.

In the conduct of those dubiously carried out missions, which were always treacherously justified in the interest of protecting “national security”, the C.I.A. became known for an agency-wide MO that was executed with absolute impunity.  In other words, CIA agents did whatever they wanted anywhere, anytime, anyhow to conduct their often devastating missions, regardless of the collateral damage and death inflicted on innocent parties.  And, irrespective of the truth of the matter or injustices involved.  As a matter of historical fact, outright deception and deceitfulness became the two central pillars of the CIA’s institutional behavior, particularly where it concerned their many black ops and psyops run against the American people.

Now fast forward to the Internet Age of the 21st century: For those who are not familiar with the CIA’s “Flat Earth” psyop specifically designed to destroy the Truth Movement worldwide, please consider the following scathing exposés on virtually every major aspect of this ongoing psychological operation.

With the essential knowledge provided by these incriminating exposés, it ought to be much easier to understand just how well funded and staffed, highly organized and pervasive, and insidious these CIA black ops truly are.

The New World Order globalist cabal that seeks the complete and final destruction of the American Republic knows that every large empire falls from within.  The American Empire is no different, which is why these NWO enemies are working overtime to paralyze and incapacitate every individual they can with such foolish hopium.  They know that an addict, even a fully armed and ammoed up addict, will be of little or no use in this last battle of the final war between the forces of light and the forces of darkness.   How could they possibly assist during this unprecedented national crisis when they’re all looking for someone else to come and save the day?!

Bottom Line: There is no greater illustration of a fallen nation than one from which the capacity to exercise the God-given gift of human reason has fled; and one in which common sense is quite rare.  Hence, it’s never been so imperative to enlighten our brethren about these matters of such great import.  Should we fail in this regard, this once great Republic will soon be no more.  Therefore, please send out and post this WARNING anywhere and everywhere it can edify We the People at this defining moment of American history.