(Natural News) A 41-year-old grandmother has captured footage of what seems to be “a demon” standing over her granddaughter’s bed.

Tory McKenzie of Las Vegas, Nevada set up a motion-activated camera at her son’s house after the latter’s two-year-old daughter, Amber, had been heard talking to something unseen in the middle of the night.

What she saw terrified her. Her camera has captured an image of a horrifying figure with horns on its head and long claws standing inches away from the toddler and her seven-month-old brother, Michael.

The incident, which happened Jan. 7, left McKenzie fearing for her grandchildren’s lives and prompted the children’s father, Ryan, to take them into his room.

“It was so shocking when I saw it. I had to do a double take. The first thing I saw was horns on its head, so you immediately think it’s the devil or a demon,” said McKenzie, a mother of five.

The figure was captured standing awkwardly, looking upwards just seconds before the infamous 3 a.m. witching hour. McKenzie related that Amber wasn’t scared of the figure and appeared to think that it’s her friend, although one night she told it to go away. 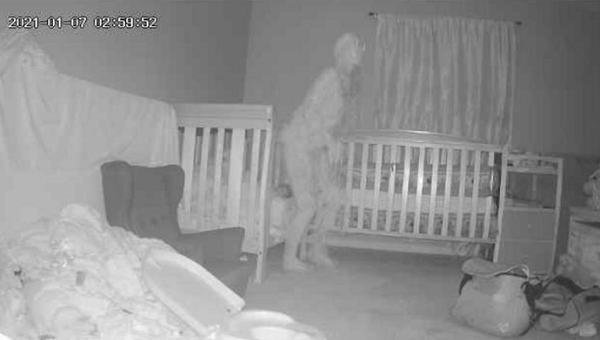 She wrote: “[Something] has been making contact of some sort with my two-year-old granddaughter and seven-month-old grandson.

People on the Facebook page gave her suggestions on how to drive the entity way, such as burning nettle salt and palo santo. But these kept going out and wouldn’t say lit. At the same time, whenever they would attempt to burn these, orbs would start appearing on camera.

“And every night since there are tons of orbs I counted over 25 in a six-minute time frame. And it looks like the two-year-old can see the orbs she watches them fly around the room (we have that on camera). So I guess obviously my main concern is that it’s not there to harm us.

McKenzie says that she thinks that the entity is trying to get their attention and tell them something and that she may know its identity.

“How do I find this out, and who it is? I kinda feel like I know who it is, by the way I feel when I’m in that room.”

McKenzie insisted that she didn’t share their experience and the terrifying photo to get attention. (Related: Board-certified psychiatrist witnessed hundreds of REAL “demonic possessions.”)

“I’m not that talented when it comes to technology to fake the photo, and I didn’t share it on my own page so it’s not like I was trying to get attention from it,” she said.

Babies have “visitors” at night

A certain Samantha DeLong-Scott commented on McKenzie’s post, saying: “I see this all the time. Whenever there’s a new baby in the house, the deceased family members pop in to see the new baby.”

A TikTok video shared by Josh Dean can be an example of DeLong-Scott’s claim. Dean shared camera footage from his little girl’s bedroom recorded just before midnight on Feb. 21.

Beginning at the 11:37 p.m. timestamp, the toddler got out of bed, walked to a pillow and crawled underneath it.

Dean, who goes by joshdean0222 on TikTok, included the description: “My daughter being pulled under the bed … wife thinks she crawled but she was clearly pulled by something!!”

The dad also included the hashtags #paranormal, #needanswers and #wtf. According to the Daily Mirror, Dean’s TikTok post was viewed about eight million times in just a day.