(Natural News) Employees at one of the nation’s largest health insurance providers are routinely subjected to far-left critical race theory lessons and asked not to consider white men in hiring decisions, according to leaked documents and chat logs obtained by the Washington Examiner.

Those who work at Cigna told the Washington Examiner that they are expected to undergo sensitivity training they consider racist and discriminatory. Lessons include reviews of concepts such as ” white privilege,” “gender privilege,” and something called “religious privilege,” which is described as “a set of advantages that benefits believers of a certain religion but not people who practice other religions or no religions at all.”

Employees say they are pressured to comply with “inclusive language” outlines that suggest replacing terms like “Brown Bag Lunch” with “lunch-and-learn” or “grab n’ go.” 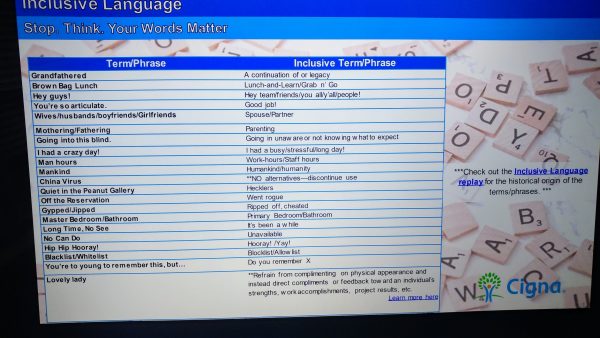 Other suggestions include avoiding the phrase “No can do” and replacing it with “unavailable.” Employees are told to avoid gendered descriptions of romantic partners or family members and not to use “Hip Hip Hooray” at birthday parties, so others feel included.

Microaggressions listed include questions such as “Do you even know what Facebook is?” and “Are you a nurse?” Employees are also asked to go through a “Societal Norms checklist” and tick off boxes if they are “White,” “Christian,” or “Heterosexual.”

“Our inclusive culture at Cigna means that we’re working hard to ensure everyone feels respected, welcome, and like they belong,” wrote Susan Stith, the Cigna Foundation’s vice president for diversity, equity, inclusion, and corporate responsibility, in an internal memo. “This extends to the words we use, including understanding when certain terms might be perceived as negative or hurtful, and being intentional about choosing positive alternatives.” 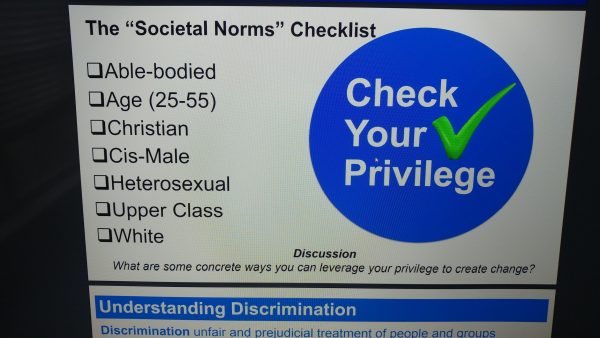 Cigna, valued in the tens of billions, boasts over 73,000 employees in offices worldwide. A 2020 Fortune 500 ranking placed the corporation as the No. 13 largest in the country as measured by revenue.

The company recommends employees learn more about racism by reading controversial books such as White Fragility by Robin DiAngelo and How To Be An Anti-Racist by Ibram X. Kendi. The book list also includes two works by accused left-wing terrorist Angela Davis, Policing the Black Man and Are Prisons Obsolete? Davis was arrested in 1970 on kidnapping and murder charges following a deadly attack on the Marin County Civic Center.

The lessons learned from the sensitivity training seminars, some employees allege, have even extended to the hiring process. 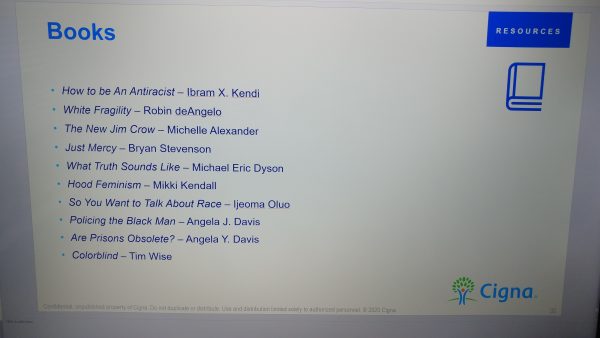 After learning that the candidate belonged to a minority group, the manager said she was excited to hire him, despite learning virtually nothing else about his background.

“Given the hiring practices they have in place where white, male candidates are blocked, regardless of qualifications, I have to say, ‘Yes, there’s obvious discrimination at this company,'” one employee told the Washington Examiner.

Another time, an employee suggested a candidate with years of industry experience. That employee was informed by the hiring manager that the candidate, a white man, could not be interviewed because he didn’t meet the diversity criteria.

Cigna did not respond to multiple requests for comment.

Some employees at Cigna say the internal policy of explicit quotas creates a demoralizing effect. In departments focused on tech or data, meeting diversity requirements often means positions are left open for inordinate periods of time.

“I can’t fill these jobs,” said one individual who described himself as a largely happy employee.

Following the death of George Floyd last May, the company began holding mandatory town halls, which one employee described as a “white giant guilt” event.

“I had employees of mine bombing me with messages, telling me, ‘This is disgusting and wrong,'” the individual said.

During one of these meetings in June 2020, Cigna CEO David Cordani spoke about racism in the United States and told a story of how he, a white man, felt discrimination in his own life as a child when he wasn’t allowed to play basketball with black players. 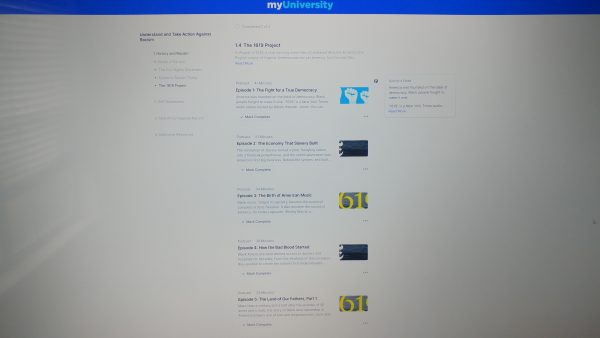 Last year, employees were required to fill out an action plan that, among other things, asked how they intend to be “more inclusive,” as well as grade themselves on their conduct.

In the Cigna “My University” portal, the company offers several lessons on alleged systemic racism in American society. Much of the curriculum directly cites the contentious “1619 Project,” including the now-deleted assertion in the New York Times that “America was not yet America [in 1619], but this was the moment it began.”

One company memo reviewed by the Washington Examiner refers to George Floyd’s death as a “senseless murder” and announces a company-wide dress code revision to allow Black Lives Matter attire in the workplace.

“As part of our culture of inclusion, we believe employees should bring their whole selves to work, and we embrace causes that align with our values,” the announcement reads. “That’s why we’ve recently updated our Dress for Your Day policy to reflect that Black Lives Matter apparel is permitted at work.”

Cigna proudly shares a variety of its anti-racist initiatives publicly. In July 2020, the company started its Building Equity and Equality Program, a “five-year initiative to expand and accelerate our efforts to support diversity, inclusion, equality and equity for communities of color,” which includes the release of “an annual diversity scorecard to advance the principles of diversity, equity, and equality.”

Read more at: WashingtonExaminer.com and PoliticalCorrectness.news.

Previous :FBI crime stats prove “white supremacy” not responsible for hate crime threat to Asians
Next : Mass Federalization: How Washington is bailing out failed states, decapitating competitive ones, and ending America as you knew it
Receive Our Free Email Newsletter