The sources who lie and the reporters who protect them

Imagine you’re a major media outlet like The Washington Post or CNN. You have a huge platform on the web, in print, or on TV. You publish consequential stories with information from anonymous sources on Trump/Russia collusion, an email Donald Trump, Jr. received about a Wikileaks release, and President Trump’s instructions to a Georgia election investigator to “find the fraud.” Your stories shape agendas and become national news. They fuel conspiracies, divide Americans, and influence elections.

And then you realize you’ve been played. Your anonymous sources gave you false information. You have to issue a correction. Why should that be the end of the story?

Fake News and “Find the Fraud”

On January 9, 2021 The Washington Post published a story that President Trump ordered a Georgia election investigator looking into 2020 election irregularities to “find the fraud” in a late December phone call.

This purported call was pushed by Washington Post reporters to further allegations of criminal obstruction of justice. A serious crime, if true.

The case for impeachment grows by the minute:

House Democrats even cited this reporting in their trial brief:

Today, The Washington Post issued a significant and concerning correction.

This Washington Post correction was necessitated by the release of an audio recording, which showed that Trump’s comments on the call were misquoted “based on information provided by a source.”

This isn’t the end of the story, however. There’s still a story and it’s a good one. It has to do with the anonymous source who lied about Trump’s call – potentially for political gain.

In other words, the question still remains:

Who is the source that lied about Trump’s call with the Georgia election investigator?

The Washington Post doesn’t say. Others have suggested the general source of the leak: The Georgia Secretary of State’s office. The name eludes us. But if Mr. Shafer’s tweet is true, what a story that would be.

The Secretary of State’s office secretly recorded the conversation, mischaracterized its contents to The Washington Post and then attempted to delete the recording. It was recently discovered in a laptop “trash” folder as part of an open records search.

This isn’t the first time the media has been burned by an anonymous source. Remember the entirety of the Trump/Russia investigation?

Granted, that gives us a lot to choose from. I’ll be more specific.

Back in December 2017, CNN reported that Trump Jr. received an email regarding a Wikileaks release on September 4, 2016. This date – 9/4/2016 – was material because it was 10 days before the Wikileaks release of the hacked DNC materials. CNN had its smoking gun. It had evidence that Trump Jr, and by extension the Trump Campaign, had advance notice of the hacked DNC documents. Until it didn’t.

Other outlets, including The Washington Post, NBC News, and The Wall Street Journal cleaned up CNN’s mess, reporting that the email was actually sent on September 14, 2016. This was significant because the correct date showed the email to Trump Jr. was sent based on “publicly available information.”

Who burned CNN? According to CNN’s own reporting, it was “two sources who had seen the email.”

CNN never disclosed its sources. It made a correction and went on. In doing so, CNN killed an important story: the names of the government officials who lied about collusion.

The public has endured countless stories that were disproven by the media’s anonymous sources. These are just two important examples. The infamous September 3, 2020 article from The Atlantic’s Jeffrey Goldberg – where Goldberg accuses Trump of calling dead American soldiers “losers” – also comes to mind. In that article, Goldberg cited anonymous sources who told him that Trump lied when blaming the rain for a canceled “visit to the Aisne-Marne American Cemetery near Paris in 2018.”

Goldberg’s story – which was really the story of his anonymous sources – fell apart within the first paragraph. Navy FOIA records, obtained by Buzzfeed’s Jason Leopold in 2019, showed the visit was actually cancelled due to rain.

On that Atlantic Story – @JeffreyGoldberg and his "four sources" claim Trump's helicopter flight to the US/French cemetery wasn't cancelled due to weather.

FOIA docs prove this to be false.

All this goes to the broader issues within the media: the reliance on anonymous sources without documentary evidence; failures of basic fact-checking; and sources who lie without consequence. The media created this monster.

But there’s more to it than that. These anonymous sources cited by the Washington Post (and CNN and The Atlantic) are undoubtedly current or former government officials. This informs us of the process. A government official lies to the press. The press publishes the lies and is forced to issue a correction once the the truth is discovered. The failure to disclose the identity of the government official is, therefore, a cover-up of government corruption.

This also gives us some perspective. A few years ago, the Washington Post introduced its banal motto: Democracy Dies in Darkness. Well, here is documentary evidence of the darkness. The media knows about it. They know where it is. They just won’t tell the public.

We asked Washington Post reporter Amy Gardner for comment. Specifically, we asked (1) Why this source wasn’t identified; and (2) What are the Washington Post rules for identifying sources who provide false or misleading info.

Our email was referred to management. The Washington Post Vice President of Communications responded: 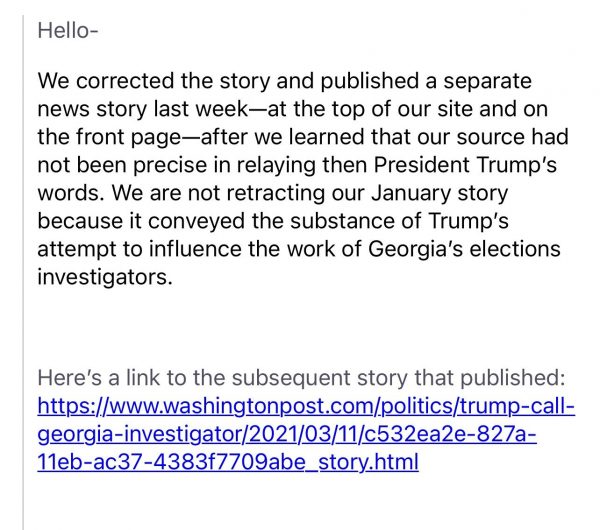 “Our source had not been precise…”

“Not been precise.” I thought that was a strange phrase to use. The source quoted Trump with precise words: “Find the fraud.” The problem isn’t imprecision. It’s is that those precise words were a misrepresentation.

After the public backlash, the Washington Post has identified its source: Georgia Deputy Secretary of State Jordan Fuchs. For those stuck behind the paywall, here is a summary: 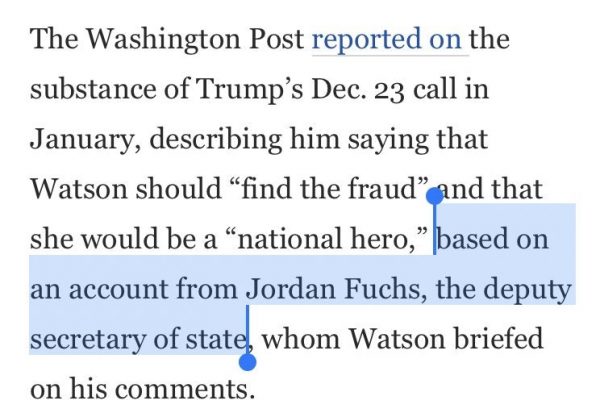 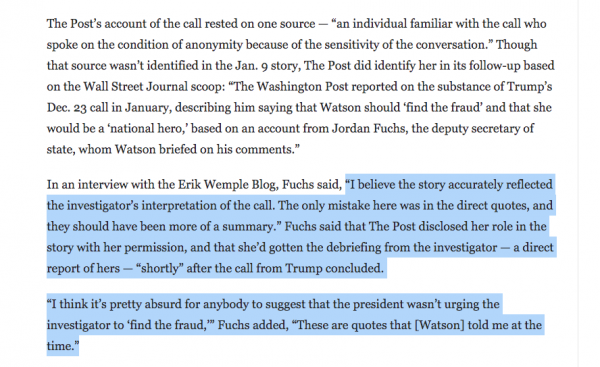 Previous :Inventor of COVID test calls Fauci a liar, says it ‘doesn’t tell you that you’re sick’
Next : Journalists, illustrating how they operate, yesterday spread a significant lie all over Twitter
Receive Our Free Email Newsletter