On the school district’s webpage about this “week of action” slated for Feb. 1-5, it reprints the “Black Lives Matter at School Guiding Principles,” which include the following:

“6. Queer Affirming – We are committed to fostering a queer?affirming network. When we gather, we do so with the intention of freeing ourselves from the tight grip of heteronormative thinking or, rather, the belief that all in the world are heterosexual unless s/he or they disclose otherwise.”

“11. Black Villages – We are committed to disrupting the Western prescribed nuclear family structure requirement by supporting each other as extended families and ‘villages’ that collectively care for one another, and especially ‘our’ children to the degree that mothers, parents, and children are comfortable.”

Besides being anti-family and adamant about teaching sexual information to children as young as four, the curriculum is overtly racist. Here are just a few examples.

The school district’s recommended lessons for middle and high school students during this week include a “Justice for Trayvon Martin Tool Kit” that includes the following statement for class discussion:

“Discuss George Zimmerman and his Internalized Racism [sic] how even though he is Latino, why he is labeled as white. Ex. George Zimmerman is ethnically latino[sic]–however, [sic] he has the same racial privilege as white person, living in a gated community. He has a light skin color, and he holds [sic] no spanish [sic] name. So Zimmerman is so white-washed, and consumed by white supremacy that [sic] is why he is white.”

A Latino man is judged by the color of his skin and then dehumanized in racial terms because of where he lives. This is okay to teach children in America using public tax dollars and public institutions.

The grammatically embarrassing “tool kit” also says: “THIS CAMPAIGN DIRECTLY TARGETS A PRISON-INDUSTRIAL COMPLEX THAT SUPPORTS DRACONIAN DRUG POLICIES, IMMIGRANT DETENTION, AND THE SCHOOL TO PRISON PIPELINE.” It also encourages students to “organize in their schools and communities” with activities such as “hosting a school assembly about police violence, starting a student organization dedicated to discussing and working on issues around police violence and racial profiling…”

A coloring page for young children linked in the school district’s curriculum folder for this week includes the following super-awkward, stereotyped image: 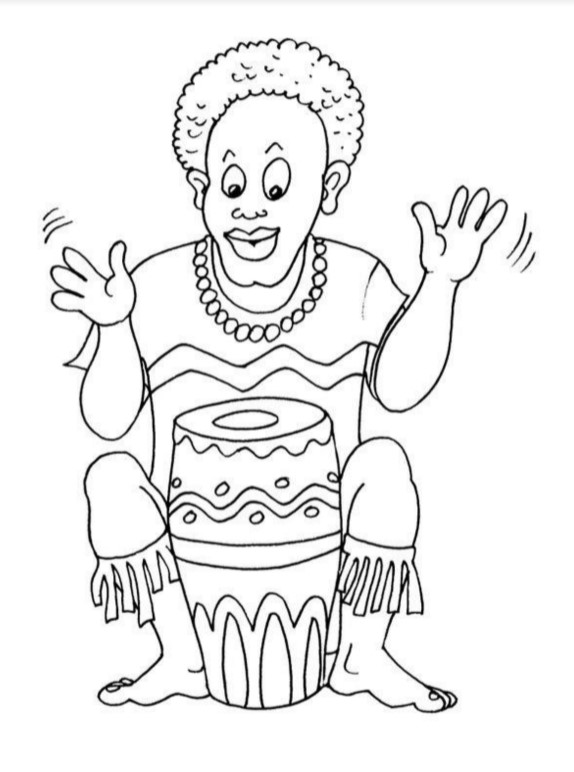 We want children to be encouraged to think of black people as drummers wearing ragged jungle clothes and bare feet? It’s probably way too uncomfortable for me to make any commentary about the physical features of this cartoon man, but suffice it to say that in other contexts they would also be seen as evidence of racist stereotyping. If The New York Times published this picture as an editorial cartoon or article illustration, street agitators would lose their minds.

This same district plan for “early childhood” instruction links to a lesson from the blog “Raising Race-Conscious Children.” That site states: “A key premise of this blog is that naming race (and other social realities) can support people to be race conscious (as opposed to ‘color blind’).” Ladies and gentlemen, we are no longer in Martin Luther King Jr.’s vicinity with race issues. We are in a much, much darker place.

What accounts for the difference? Ames is the home of Iowa State University and several federal agency outposts, such as an energy lab and U.S. Department of Agriculture locations. It appears the parents of most of the school-age children in the community are white professionals with college degrees — the typical woke profile. Seventy-nine percent of them are married, drastically more than the national average of U.S. parents of school children.

Marriage has undeniably contributed to these parents’ professional success. Children without it are at risk for almost every terrible thing possible, including poverty, physical and sexual abuse, poor health, and economic insecurity.

These comfortable parents have their children in public schools that are hypocritically endorsing the kind of family and social structure that, if realized, would ensure greater material and emotional poverty in their own children and in all children. While claiming to seek equality and justice, these parents’ school district is helping increase inequality and injustice.

The Iowa legislature is currently considering a proposal to let parents decide where to take their child’s public education dollars rather than preserving public schools’ complete monopoly on children and funds.

Joy Pullmann is executive editor of The Federalist, a happy wife, and the mother of six children. Sign up here to get early access to her next book, “How To Control The Internet So It Doesn’t Control You.” Her bestselling ebook is “Classic Books for Young Children.” A Hillsdale College honors graduate, @JoyPullmann is also the author of “The Education Invasion: How Common Core Fights Parents for Control of American Kids,” from Encounter Books.

Read more at: TheFederalist.com and Indoctrination.news.