(Natural News) The Biden regime, faced with the fear of multiple populist uprisings, has issued an Orwellian “terrorism” alert suggesting pretty much everyone who is against the status quo is a potential terrorist.

From ABC News, “DHS uses federal alert system for 1st time in a year to warn of domestic terrorist threat”:

Using a federal system designed to warn all Americans about terrorist threats to the U.S. homeland, the Department of Homeland Security has issued a warning that anger “fueled by false narratives,” especially unfounded claims about the 2020 presidential election, could lead some inside the country to launch attacks in the coming weeks.

“Information suggests that some ideologically-motivated violent extremists with objections to the exercise of governmental authority and the presidential transition, as well as other perceived grievances fueled by false narratives, could continue to mobilize to incite or commit violence,” according to a bulletin issued Wednesday through the DHS National Terrorist Advisory System — or NTAS.

The system was last used to issue a public warning a year ago, when DHS issued a bulletin over potential retaliation by Iran for the U.S. assassination of Iranian military commander Qassem Soleimani in Iraq days earlier. A year before that, DHS issued a bulletin through the same system to highlight the threat from foreign terrorist groups like ISIS or al-Qaida.

But over the past year, domestic terrorists “motivated by a range of issues, including anger over COVID-19 restrictions, the 2020 election results, and police use of force have plotted and on occasion carried out attacks against government facilities,” and “long-standing racial and ethnic tension — including opposition to immigration — has driven [domestic terrorist] attacks,” the bulletin issued Wednesday said.

Note how they even included BLM protesters.

The message is clear: everyone is a potential terrorist — so be very, very afraid and do whatever the regime demands of you.

Of course, the regime terrorizing the public to get them to submit to their tyranny is just fine!

The DHS also encouraged the public to rat on their neighbors and “report suspicious activity and threats of violence, including online activity, to local law enforcement, FBI Field Offices, or their local Fusion Center.”

“If You See Something, Say Something™,” the alert said (the trademark was included).

ABC News released this propaganda piece on the alert bulletin which was so over the top it would make the editors of Pravda blush:

Our corrupt ruling class are openly labeling the American people as domestic terrorists while simultaneously walling themselves off from the general public.

New statement from acting US Capitol Police chief: "Vast improvements to the physical security infrastructure must be made to include permanent fencing" pic.twitter.com/6JMPfcn1E9

The New York Times on Wednesday ran an article from “former” top CIA officer Robert Grenier labeling dissenters as part of a terrorist “insurgency” and calling for them to be “defeated” like an enemy army. 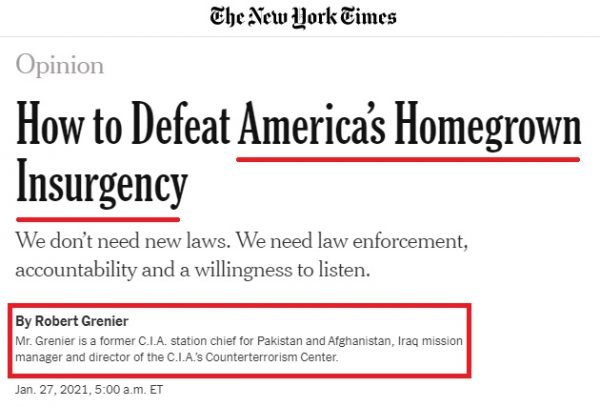 Grenier said — without evidence — that groups such as “the Proud Boys, the Three Percenters, the Oath Keepers, ‘Christian’ national chauvinists, white supremacists and QAnon fantasists” are “committed to violent extremism.”

Of course, we now know the Proud Boys have been led for the past two years by a “prolific” FBI informant.

Former DHS head Michael Chertoff also called the Capitol protest “domestic terrorism” and threw his support behind using “sedition” and “hate speech” laws against the American people as part of the regime’s new War on Terror.

As we saw on Wednesday, the feds just indicted a Twitter troll over a meme he shared in 2016 and are threatening to throw him in prison for ten years under a rarely-if-ever-used charge of “conspiracy to violate rights”!

Vindictive prosecutors have already hit multiple people with ridiculous “conspiracy” charges and the Washington Post is reporting that they’ve “opened case files on at least 400 potential suspects and expect to bring sedition charges against some ‘very soon.'”

If the regime actually wanted to bring about “unity and healing” they would be showing leniency to these protesters, ratcheting down tensions and instituting populist reforms — instead they’re labeling everyone as “domestic terrorists” and criminalizing dissent!

Previous :Is ‘the Reddit army’ on the verge of creating the most epic silver short squeeze In U.S. history?
Next : The stock market, fatally wounded by the truth, will stumble and crash
Receive Our Free Email Newsletter