(Natural News) Now that it is way too late for the nearly half a million people in America who already died after testing positive for the Wuhan coronavirus (COVID-19), Facebook, the American Journal of Medicine (AJM), and other Big Media and Big Tech outlets are suddenly coming clean about being dead wrong concerning the safety and effectiveness of hydroxychloroquine (HCQ).

A new study published in the AJM right around the time that Joe Biden was installed as “president” found that early treatment of coronavirus patients with HCQ resulted in a drastically lower mortality rate. Those who followed the deadly advice of Deborah Birx and Anthony Fauci, on the other hand, are much more prone to serious illness or death.

Patients who were able to use HCQ at home, and especially those who did so early and steadily, had almost no risk of suffering complications, let alone death. Many who listened to the television and did nothing but be scared, however, ended up in dire straits (see image below). 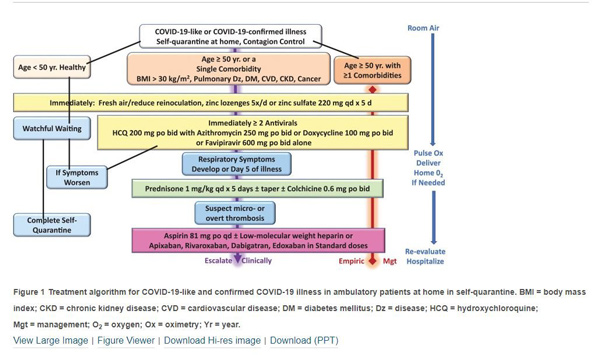 Another study from back in August found that countries where HCQ was widely prescribed as a remedy for the Chinese virus saw drastically lower mortality rates than the United States and other countries where the safe, inexpensive, and generic anti-malaria drug was banned by the medical deep state.

The website c19study.com contains an archive of 237 HCQ studies, 171 of them peer-reviewed and the remaining 195 comparing treatment versus control groups. These studies almost uniformly show that HCQ used early is a safe and effective remedy for the Wuhan coronavirus (COVID-19).

More than 3,074 scientists evaluating 166,999 patients determined that there is almost no downside to taking HCQ for the Chinese virus, contrary to what the mainstream media has been claiming. Using it for pre-exposure prophylaxis, meaning before a person gets sick, is also effective.

Will Birx and Fauci be held personally accountable for 440,000 dead Americans?

In response to the latest study, the Facebook Oversight Board under Biden decided to overturn a previous case that determined HCQ to be unsafe and ineffective. This means that Facebook users will now be able to post and share positive information about HCQ without consequence.

Facebook had previously claimed that using HCQ to try to treat the Wuhan coronavirus (COVID-19) “contributes to the risk of imminent … physical harm.” This is no longer the case now that Biden is “president.”

The establishment is suddenly playing dumb and acting as though it was a “mistake” all this time to vilify HCQ, despite decades of research showing its efficacy against a range of coronaviruses.

It is all of a sudden politically expedient to roll out HCQ to make it seem as though people are “healing” thanks to Biden. As for the roughly 440,000 Americans who had to die, these are mere political casualties for a much greater cause in the eyes of the Democrats.

“How many hundreds of thousands of victims were killed due to Dr. Fauci, the CDC and the tech giants’ false claims on hydroxychloroquine?” writes Jim Hoft for The Gateway Pundit.

“The jihad against HCQ was to get back at Trump. Hundreds of thousands of Americans are dead today! When will these people face justice?”

Responding to the news, one Gateway Pundit commenter joked that President Donald Trump was right all along.

“President Trump in April 2020: ‘Hydroxychloroquine is showing great promise. It could be the cure that we need for the China virus.’

MSM: ‘Does he think he’s a doctor? He’s going to get us all killed.’

Big Tech: ‘Anybody use the term Hydroxychloroquine and we’re going to ban you. Ok? Even if you are a doctor.’

To keep up with the latest news about the Wuhan coronavirus (COVID-19), be sure to visit CoronavirusNutrients.com.

After 440,000 Americans reportedly died, mainstream media and Big Tech finally admit hydroxychloroquine works
Another fake “study” blames firearms for causing death, as if guns have minds of their own