(Natural News) As President Joe Biden assumes the Oval Office, The Federalist will continue its rigorous coverage of the new White House, keeping the administration accountable with substantive fact-checking throughout Biden’s tenure.

When Trump implemented a travel ban on China in the early days of the coronavirus pandemic, then-candidate Joe Biden railed against the executive action as “xenophobic” claiming such restrictions do not work.

Less than a year later, Biden has implemented his own travel bans on South Africa, Brazil, Great Britain, and 26 other European countries in the second week of his presidency.

Biden's tweet about Xenophobic & fear mongering was not about the Muslim country travel restrictions. It was about COVID, in March of last year. Biden also stated travel restrictions won't work. https://t.co/v6PNl5ILOb pic.twitter.com/SRj8Wtq2oR

Biden Team: Trump Vaccination Plan ‘Worse Than We Could Have Imagined’

After Biden staffers lied telling CNN there was “nothing for us to rework” in terms of a vaccination distribution plan, White House Press Secretary Jen Psaki admitted there was a plan at the podium during a Jan. 25 briefing they just won’t give credit.

Psaki told reporters the plan from the Trump White House was “much worse than we could have imagined.”

.@PressSec says the coronavirus vaccine distribution plan inherited from the Trump White House is "much worse than we could have imagined."

The plan inherited by the Biden White House however, has already put the new administration on trajectory to reach its goal of reaching 100 million vaccinated within its first 100 days.

Below is the chart outline for the distribution process under Operation Warp Speed, which produced not one, but two coronavirus vaccines in record time. 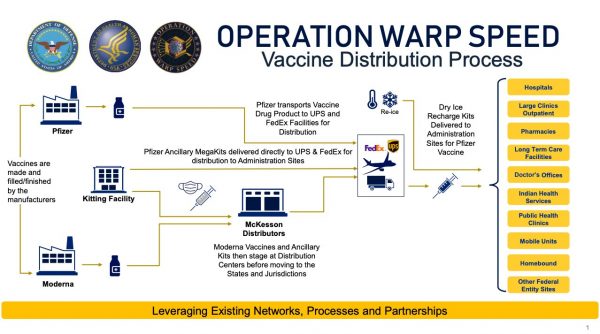 Biden Warns Pandemic Will Worsen After Pledging To Shut Down Virus

President Biden spent the entire campaign last year running on a platform to shut down the novel coronavirus, only to back away from the signature pledge on day three of his White House tenure with a bold admission.

“There’s nothing we can do to change the trajectory of the pandemic in the next several months,” Biden said on Jan. 22.

On day 3, @JoeBiden gave up and admitted he was lying. https://t.co/e6583LHruH pic.twitter.com/1yh0DkG8wG

Joe Biden claimed the federal government failed to “act with the urgency” that was necessary to combat the coronavirus pandemic, apparently neglecting to mention the Trump White House’s Operation Warp Speed that produced two viable coronavirus vaccines by the year’s end.

Sources within the Biden administration told CNN they inherited no vaccine distribution plan from the previous White House.

“There is nothing for us to rework. We are going to have to build everything from scratch,” one source reportedly told CNN’s MJ Lee, except there was, as outlined in Trump’s Operation Warp Speed, included below.

The Biden team’s statements were also contradicted by the National Institutes of Health Director Dr. Anthony Fauci the same afternoon.

“We’re certainly not starting from scratch, because there is activity going on in the distribution,” Fauci told reporters.

White House spokeswoman Jen Psaki justified Biden’s decision with his family to forgo face masks at the Lincoln Memorial after signing an executive order requiring them on all federal lands.

“He was celebrating a historic day in our country. … We have bigger things to worry about,” said Psaki, whose dismissal of the face mask as an insignificant issue was contradicted by the White House edict passed hours earlier.

Jen Psaki is asked why Joe Biden and members of his family weren't wearing masks at the Lincoln Memorial last night after signing the mask mandate on federal lands:

"He was celebrating a historic day in our country… We have bigger things to worry about." pic.twitter.com/wLjD1V0k1f

Though Biden has received both shots of the Pfizer coronavirus vaccine, Centers for Disease Control and Prevention guidelines stipulate that vaccinated people are to continue wearing face masks, citing a lack of research showing whether those vaccinated can still spread the virus. While Biden likely did not need to wear a face mask, considering he was outside and adequately distanced from others, the absence of a mask flies in the face of Biden’s executive order, in which “celebrating” is not listed as an exception.

Joe Biden defended his administration’s goal to vaccinate 100 million Americans within his first 100 days in office after a reporter questioned whether the target was too modest.

“When I announced it, you all said it wasn’t possible. C’mon. Gimme a break, man,” Biden snapped.

Biden, asked if 100 million vaccines within 100 days is too low of a goal, snaps: “When I announced it you all said it wasn’t possible. Gimme a break. C’mon man.” pic.twitter.com/O7n7jBOjvn

While few articles at major publications have voiced some skepticism, they remained rare, undermining Biden’s claim that “all” media had been overwhelmingly pessimistic of the Biden administration reaching the 100 million mark by the end of April.

Biden Vows to Be Unity President After Smearing GOP Sens. as Nazis

Biden launched his first term as commander-in-chief by branding himself as the unifier-in-chief while aggressively pursuing a partisan progressive agenda promoting left-wing ideas of “social justice” after smearing two Republican senators as Nazi collaborators.

“To all those who did not support us, let me say this: Hear me out as we move forward. Take a measure of me and my heart,” Biden pleaded with the American people.

Less than two weeks prior, however, the “unity” president smeared Republican Sens. Josh Hawley of Missouri and Ted Cruz of Texas as Nazis.

Previous :Cali. X-ray tech “excited” to get shot dies after receiving 2nd dose of Pfizer COVID-19 vaccine
Next : How DJT lost the White House, Introduction: Why I was involved before November 3 and what I learned because I was (1.3)
Receive Our Free Email Newsletter

American companies walk back vaccine mandates for workers
China says it will attack any American forces that come to the defense of Taiwan
OSHA gives private companies until Jan. 4 to comply with Biden’s oppressive vaccine mandate
Army surgeon warned that pilots could die in midair from COVID vaccine injuries… but was ignored
Dr. David Martin: Biden’s vaccine mandates mean nothing
Investigative journalist exposes Pentagon-funded study that can prove COVID-19 vaccines do more harm than good – Brighteon.TV
Pandemic of the vaccinated? Real-world data says it is, and it may get worse
Group representing school boards across begs Biden to weaponize the FBI against outspoken parents
RESISTANCE CHICKS: Michelle and Leah Svensson discuss the implications of the FDA rejecting Pfizer booster shots – Brighteon.TV
Judge Fred Mosely talks about the lies and deceptions driving modern “science” on “Laws of Life” – Brighteon.TV