Perhaps it is not only the internet that needs to be divided into red/blue.

Through the years we have seen half-hearted rhetoric about dividing the country into two, red states and blue states, not just because of how they voted in any particular election, but because of the beliefs they live by.

Conservatives favor lower taxes, smaller government, protecting our children from indoctrination into socialism, and from being told that there are more than two genders, etc…etc…etc…

There is no doubt that liberals and conservatives are completely different, not just in small segments of ideology, but from one end of the ideological spectrum to the other.

The differences between the two segments of society continues to widen every day.

A new poll shows the highest level of support for splitting America up into red and blue countries, separating the two segments of society, with each portion sovereign and in control of their own nation.

25% now want the U.S. divided up into red and blue countries, according to new poll. Granted a significantly higher percentage opposes such a move, but the 25% is the highest level of support we have seen for such a measure and the pattern shows the support continues to increase. 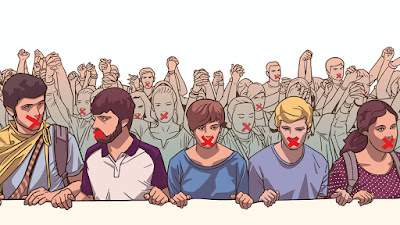 DANGEROUS PROPOSALS BY LIBERALS AGAINST CONSERVATIVES

Not only are liberals across the board celebrating the online censorship of conservatives,  but we are seeing some very disturbing proposals by radical liberals to “de-program,” conservatives, to force the “liberation” to southern states because they generally favor Republicans, cutting off conservatives from banks, and other offline services, and mush more.

Alexandra Ocasio Cortez, otherwise known by me as “the bimbo from New York,” thinks that Southern states should be liberated because she claims they are “suppressed states.”

Previous :Democrats will be ‘devoured by their own’ as ‘revolutionaries’ work to destroy all vestiges of Christianity and Western civilization and history is rewritten to resemble a fairy tail
Next : Blacks are superior to Whites? Biden’s civil-rights pick has shocking beliefs
Receive Our Free Email Newsletter

Paul Craig Roberts: America is erasing herself
After the Biden regime gives the media their marching orders, they push a ‘boom’ that doesn’t exist
Biden, Democrat spending primarily to blame for runaway inflation that’s only going to get worse
If you are surrounding yourself with appliances, robots and gadgets that depend on the cloud, you are begging for disaster
Beverly Hills residents arm themselves and form self-defense groups to counter rising violence
Russia threatens to deploy intermediate-range nuclear missiles in Europe as tension with US escalates
Fed survey shows Americans expect inflation to get worse
Flurry of active volcanoes will cause global COOLING and crop failures… global financial and political systems on the verge of catastrophe
Labor Secretary backs away from enforcing covid jab mandate for truckers, realizing entire supply chain will collapse if truckers aren’t allowed to work
Billionaire anarchist George Soros’ org has been caught funding “dark money” group that pushes for defunding police