Back then Joe Biden was silent about the killings, too, despite attacking President Trump and his supporters for Wednesday’s violence at the Capitol.

There’s certainly enough blame in America to go around. But to be proportionate, let’s analyze some things very clearly.

Even one dead is too many, especially during what are supposed to be peaceful protests. Everyone responsible for murder should be held to account. But that’s not what happened in 2020, while Democratic Party politicians encouraged their supporters to continue their violent protests while the media called them “mostly peaceful.”

It’s also incredibly easy to find video evidence of Democrats egging on violent Black Lives Matter/AntiFa protesters in 2020, and even how long-standing a campaign of incitement this was, stretching back to 2015.

Back then, Black Lives Matter became “an official part of the Democratic Party” in the words of the leftist magazine Mother Jones:

“In August, the DNC passed a resolution declaring its support for the movement.”

By July of the next year, five police officers were murdered with a further seven injured by a Black Lives Matter-inspired domestic terrorist in Dallas.

Perpetrator Micah Xavier Johnson told police he was upset by recent police shootings and “wanted to kill white people, especially white officers.” He added, per the New York Times, that “he was upset about Black Lives Matter.”

Johnson’s motivations were explicit, and his inciters are obvious.

But the media now wants to claim that despite telling protesters to be peaceful and go home – even before the aggression at the U.S. Capitol – that Donald Trump is to blame for mobs smashing windows, and the eventual death of an officer.

Democrats have incited Black Lives Matter and AntiFa for years. The former Deputy Chairman of the Democratic Party itself – Keith Ellison – was roundly condemned for taking a selfie with a “handbook” for the violent, leftist AntiFa group.

In fact, BLM even uses ActBlue – the Democratic Party’s fundraising platform and the top source of income for the Biden for President campaign in 2020. 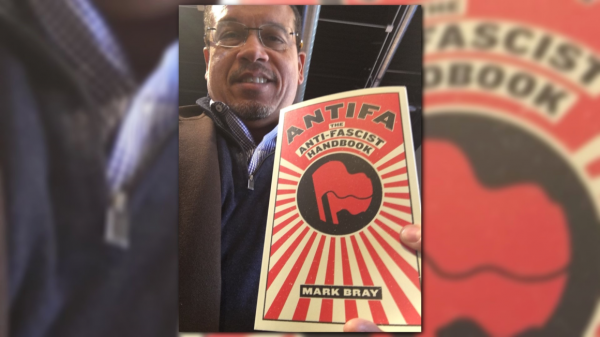 ELLISON AND THE ANTIFA HANDBOOK

This – for unfamiliar audiences – would be broadly like QAnon using WinRed, the Republican platform, to fundraise for its activities. Except unlike BLM, QAnon supporters – however fantastical in their beliefs – have not been responsible for nearly as much violence at BLM has.

In 2020 alone, Black Lives Matter and affiliated protests have had to claim responsibility for the deaths of more than two dozen Americans – and that’s according to the far-left Guardian newspaper.

There are, of course, more.

And there were, of course, an even higher number of non-fatal shootings, stabbings, batterings, etc, including the L.A. police officers who were ambushed and shot in the head by a pro-BLM activist; and the Louisville cops shot by an anti-police “protester.”

Following on from loss of life and attempted attacks on people’s lives comes the damage done to livelihoods during the 2020 riots. 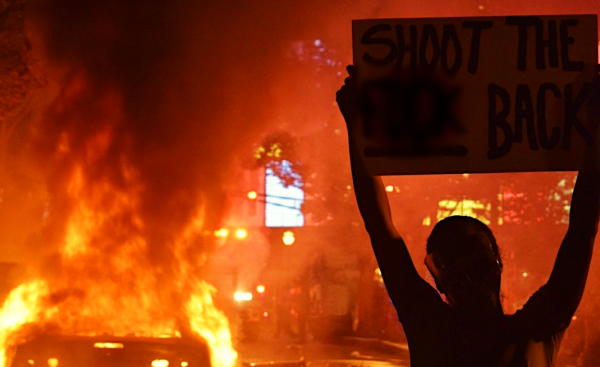 In Minneapolis alone, estimates of damage caused reached a half a billion dollars, and insurance firms calling the nationwide riots and looting the most expensive in American political history. Around two billion dollars is believed to be owed.

The latest articles of impeachment being passed around alongside a set of media talking points indicate that Democrats intend to try to charge President Trump with “incitement.”

By claiming the election was fraudulent – which around 40 per cent of the American public believe – they say Trump “willfully incit[ed] violence against the Government of the United States.”

The problem is while that is demonstrably untrue given the President’s statements, what is true is that Democrats egged on violent rioters in 2020: leading to the deaths of dozens, and a $2bn bill for America.

Trump told his crowd on Wednesday to “walk down to the capital and… cheer on our brave senators and congressmen and women,” even adding: “I know that everyone here will soon be marching over to the Capitol building to peacefully and patriotically make your voices heard.”

Democrats, however, did something quite the opposite:

In reality, as per the Russia collision hoax and the Ukraine-impeachment hoax, Democrats are again projecting.

It has, in fact, been the Democratic Party of America that has fanned the flames of political extremism over the past half decade.

While there can be no excusing the violence from a small fringe of attendees on Wednesday, every large conservative voice and representative has denounced it. The same cannot be said for the Black Lives Matter-inspired, or AntiFa-caused violence in America.

In truth, it should be Democrats having their social media profiles shuttered, their politicians impeached, and their livelihoods affected as a result of their political extremism.

But Joe Biden was the largest beneficiary of corporate America’s donations, and thusly it follows that such companies would only seek to prosecute one political side.

If you want to further understand their motivations, and what corporate America has to gain by cosying up to one of the most corrupt and Chinese Communist Party-friendly politicians in America… we suggest you start here.

Read more at: TheNationalPulse.com and DomesticTerrorism.news.

Democrats are now moving quickly to reclassify conservative dissent as “domestic terrorism”
Cops, kids, reporters & activists were murdered as Democrats incited 2020 riots… Now they’ve accused Trump of their tactics
Barack Obama says Trump incited U.S. Capitol violence, but Obama helped foster, nurture and enable the destructive BLM movement
WATCH: CNN’s Anderson Cooper interviews BLM/Antifa leader who was part of Capitol siege, recently arrested for RIOTING, caught on video threatening to beat a woman… Treats him like he was a reporter on the scene
NEW VIDEO: Antifa hands out weapons from bag during storming of US Capitol
Leftist Democrats claims that Trump “incited violence” when they are the ones who enabled and cheered deadly mobs throughout 2020
Trump urges Pompeo to designate Antifa a “terrorist group”
PROOF: BLM activist posed as Trump supporter before Capitol false flag
New role for Antifa: Biden’s ‘shock troops’
The all-out assault on conservative thought has just begun