Owners of SolarWinds have links to Obama, the Clintons, China, Hong Kong and the US election process

(Natural News) Who owns SolarWinds?  This is a good question due to the complicated sales and purchases of related companies and individual owners over the past few years.

Per our research, the owners of SolarWinds are related to the Clintons and companies that verify elections in the US.

If you look up SolarWind’s 10K on the SEC website, EDGAR, you’ll find that the company was acquired in February 2016 by investment firms Silver Lake and Thoma Bravo.  Then in 2018, the company went public through an Initial Public Offering (IPO): 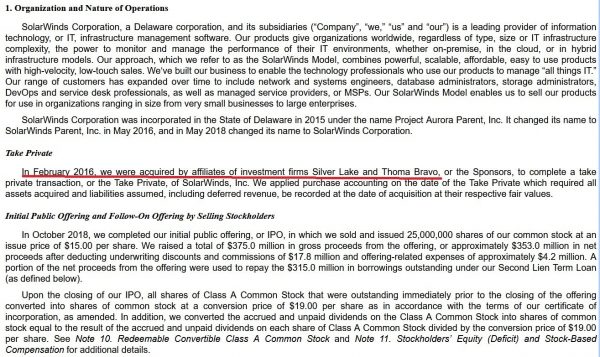 The private owners before taking the company public through the IPO are noted in the company’s most recent annual financials (10K) as Silver Lake and Thoma Bravo.

According to Dr. Quigley on Twitter, “the buyout firm, [Thoma Bravo] who now owns SolarWinds was founded by a Puerto Rican billionaire who contributed over $100k to Clinton in 2016. His name is Orlando Bravo.”

Not sure if this has been shared yet but the buyout firm, [Thoma Bravo] who now owns SolarWinds was founded by a Puerto Rican billionaire who contributed over $100k to Clinton in 2016.

His name is Orlando Bravo.

What were his contributions in 2020? pic.twitter.com/QRufqU48qI

Thoma Bravo purchased Entrust in 2009 but it appears they sold to Datacard group in 2013. Still looking into this.

Thoma Bravo purchased Entrust in 2009 but it appears they sold to Datacard group in 2013.

Still looking into this. https://t.co/IahQI2zOsW

(Fyi – Orlando Bravo made two contributions of $125,000 each to the far left Democrat PAC Vote for Vets):

And as Dr. Quigley mentions, Bravo purchased a company by the name of Entrust in 2009.  Entrust has a location in Ottawa, Canada.  But we’re not totally sure of this, it may actually be the other way around, but no doubt the two companies are connected.

I believe I've RT'd this once before but now that I'm looking closer it needs to be added here. https://t.co/6huvyLywJQ

Thoma Bravo also purchased DigiCert in 2015.  DigiCert and Entrust verify the elections for at least half of the states in the US.  Entrust is also closely related to a firm by the name of ‘Live Ramp’ which is located in Shanghai.

DigiCert, Thoma Bravo, and CyberTrust somehow verify ALL ELECTIONS IN ALL STATES pic.twitter.com/mlEMTg5fUW

Dr. Quigley provides an article on Orlando Bravo from the Wall Street Journal:

Recent Bravo bio from WSJ for anyone looking into him.https://t.co/S8YhijCY1K

In summary, Thoma Brava is one of the owners of SolarWinds and it also is connected to the firms that validate elections for at least half the states in the US.

Dr. Quigley also has done some work on Silver Lake Partners (SLP). SLP Co-founder Glenn Hutchins the other firm that owns SolarWinds. Hutchins is on the Board of ATT and is related to Brookings and is a former advisor to Bill Clinton and is currently on the board of the Obama Foundation:

Nothing to see here.

There’s more on SLP – like one of its managing directors, Kenneth Hao, a billionaire from Hong Kong:

After Glenn Hutchins left Silver Lake in 2018 he left it in the hands of a new class of managing partners.

Notably, Hong Kong based Billionaire Kenneth Hao also sits in the board of SolarWinds. https://t.co/IDTnoZg2X2 pic.twitter.com/JJVma888J7

The owners of SolarWinds are closely related to Obama and the Clintons. They also are heavily in the election business and have relations with companies and individuals in China and Hong Kong.

Biden and Harris blatantly lied when they said before the election they would not ban fracking
Associated Press wants “extremist” podcasts that challenge fraudulent elections to be eliminated
Political scientist secretly working for the Iranian government arrested by feds
Biden pick for top aide was once a visiting scholar at a “front group for Chinese intelligence”
BACK TO THE TABLE: Iran expects US return to Obama nuclear deal under Biden
Barack Obama says Trump incited U.S. Capitol violence, but Obama helped foster, nurture and enable the destructive BLM movement
Bill Barr has been an American traitor since at least 1992
OUTRAGE: Federal judge orders group that exposed sale of baby body parts to pay millions to Planned Parenthood
Trump authorizes special prosecutor John Durham to use classified info in ongoing “Russiagate” probe
The cheering section for World War III