(Natural News) My how things have changed in our elections. In 2016 the progressive socialist Democrats shrieked voting fraud, blaming the Russians for helping President Trump win. These self-same leftists show a total lack of concern about the massive voter fraud being forced on the American people in the current election. They ignore the massive fraud and vote switching that has been brought forth.

They have hidden the facts needed to make an informed opinion about precisely what has happened. They will tell you that all the affidavits given under the penalty of perjury are lies. They will not even inform the citizens of this country that the Federal Election Commission has called the 2020 election illegitimate. In 2008, even Barak Obama discussed mail-in ballots and signature verification.

The progressive socialist globalists that infiltrate the media, both mainstream and social, along with the perpetual lying of the leftists in charge of the Democrat party, have changed from “no evidence” to “without real evidence” or “unsubstantiated claims.” The lies they put forth show the ignorance of the socialists pushing this premise but hides the evidence from the low information bobble-head voters in their party that refuse to see the actual evidence.

The leftists using words such as “baseless,” “unfounded,” and “debunked” does not change any outcome and are being used in an attempt to sway the American people to just turning away from Trump and give up. The question then becomes, if these progressive socialist Democrats are so sure there is no fraud, why are they not agreeing to the investigations that show the fraud they refuse to see? Why are they spending time and effort trying to intimidate the fine lawyers doing the investigations they should be doing? 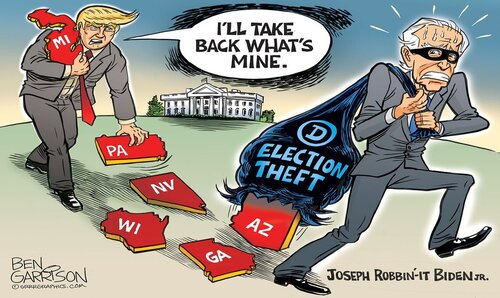 These nasty and corrupt public officials who are paid to work for us have shown that the classlessness they have demonstrated to Republican poll watchers, including closing these poll watchers out and counting millions of votes nationwide in the dead of night without poll watchers being there. In a free America, any question about whether this is constitutional is valid, but is being pushed through by state government officials with lies that the mainstream media will not cover for the American people. Rather than investigating the most important rights that American citizens have, the globalist socialists continue to tamp down any questions, mock those that question the narrative they are trying to push on the American people, calling them evil.

Social media has a hand in this theft as well. Perceiving themselves to be the overseers of what the American citizens are allowed to see is of paramount importance to the Leftists will continue to be used to shape the national discussion of lies that the American people are force-fed. The focus of the MSM, social media, Never Trumpers, globalists and entertainment are intent on destroying the progress that our free country has made over the first four years of President Trump, but also to destroy the underpinnings of the fundamental protections that the American people have enjoyed for the past 200 years.

Contrary to the bleatings of all these leftists who have been condescending to the American people, the election is not completed. Joe Biden is NOT the president-elect at this time. The talking point now being used about how the evidence of voter fraud, which the leftists had refused to admit to until recently, isn’t enough to change the election is also a lie. I explained the fraud that has been proven in parts one and two, and there is still more to be found.

The U.S. Constitution and state constitutions give the formation of election protocol to the state legislatures, not the governor or Democrats party election officials. In many cases election protocol was mandated by those with no authority to do so weeks before the election. These changes were made in signature verification, election deadlines, citizenship, and other areas that have been shown to lead to massive fraud.

Pennsylvania surprisingly won an unconstitutional ruling in the U.S. Supreme Court. One aspect of this that has been changed is requiring that absentee ballots be requested and not just done in a mass mailing formula. The law also gave the governor the right to extend the ballot deadline in contravention of both Federal and state law. Pennsylvania needs a full forensic audit to get to the bottom of the unconstitutional damage that has been done and has shown to be a fraud. There can be no question that the Commonwealth Court and Secretary of State ignored the laws put in place not only in the U.S. Constitution but the state laws voted on by the State General Assembly. Also not explained was the affidavit of a USPS contractor Jesse Morgan that delivered 288,000 ballots from Bethpage, New York, to Lancaster, Pennsylvania, which disappeared after delivery to Lancaster, Pennsylvania. There has been no reason given of why ballots were being sent to Pennsylvania from New York or what happened to these ballots.

Read more at: AllNewsPipeline.com and VoteFraud.news.

America up in flames like Democrat-run cities across America is the left’s goal for Joe Biden’s presidency
US enemies may be planning EMP attack as civil unrest hounds Capitol
Health systems collapsing around the country as L.A. County orders EMS not to transport patients who have “little chance” to survive
We were laughed out of court because the courts have become ridiculous
Situation Update, Jan 9, 2021 – Emergency red alert America descending into WAR
ANARCHO-TYRANNY: Same California police that did NOTHING when BLM was rioting now swarm home of honest man trying to register legal firearm
DON’T ASK, JUST EAT! Lab-made Franken-meat contains fake blood, fat and muscle… and what else?
My predictions for 2021 are almost fully aligned with James Howard Kunstler: Read the list here
How the next Great Depression will be different from the first? About 80% of population will die
California restaurant owner confronts health inspectors over closure order