“I have no confidence that Joe Biden is the deserved winner of this election, based on our findings,” Matt Braynard said in a Nov. 25 video. “He may have won, he may not have won. Trump may have lost, Trump may have been reelected.

“We just can’t know because of how bad this election system has operated.”

The group initially identified 1.25 million voter issues and followed up on them through phone calls and by cross-checking data against other databases.

The team ran several major analyses including of voters who had moved out of state but still voted in the state they had left; voters who registered to vote using a post office box number rather than a residential address as required; voters who requested a mail-in ballot and sent it in, only for it not to be counted; voters who didn’t request a mail-in ballot and didn’t receive one, but discovered a vote had been cast in their name; as well as research on people who voted more than once and on those who are listed in the death index.

One of Braynard’s biggest findings involved voters who had submitted a National Change of Address form to the post office, indicating they had moved out of state, yet appeared to have voted in 2020 in the state they moved from.

In Georgia, the team found 138,221 such people, which represents a much larger number than the state’s current vote differential (12,670) in the presidential race.

Braynard said the numbers are high enough that they could “easily” overturn current election projections.

“The number of questionable ballots surpasses the vote margin in at least three states right now—Arizona, Georgia, and Wisconsin,” Braynard told The Epoch Times on Nov. 25. Those three states have a combined total of 37 electoral votes.

“This isn’t speculative. This is just what the data shows.” 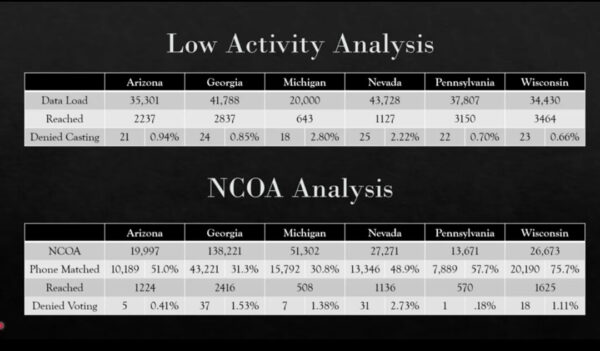 A screenshot of a summary of findings regarding the 2020 election and low activity voters, as well as those who moved out of state, but are tagged as voting in the original state, according to data from Matt Braynard and team. (Screenshot/The Epoch Times)

The current vote count difference between the two main presidential candidates and the electoral votes involved are as follows:

Braynard said the team also found people who had voted more than once. However, he suggested the numbers his team found are likely much lower than the actual numbers, as he was unable to run the data against the numbers of in-person, Election Day voters.

The number of early and absentee double voters in Nevada and Pennsylvania was roughly 750 people, while in the other four contested states, it ranged from 150 to 400 people.

Braynard said the analyses his team conducted don’t require any leap of faith or trust in some “magical mathematical formula.”

“I can give you the list of the people who voted in this election, who filed National Change of Address cards in Georgia, moving themselves to another state,” Braynard told The Epoch Times.

“And I can also show you the subsequent state voter registrations of these individuals in other states, who then cast early or absentee ballots back in Georgia. I can show you the names of the people and the records of them having voted in multiple states and the raw data that the states make available.”

Pennsylvania Secretary of State Kathy Boockvar’s office previously said it has found no evidence of voter fraud or mass irregularities in Pennsylvania, while secretaries of state in Arizona, Georgia, and Michigan have said the same.

Early last week, the Department of Homeland Security’s cybersecurity division said the Nov. 3 election was the “most secure” in U.S. history, saying there is “no evidence that any voting system deleted or lost votes, changed votes, or was in any way compromised.”

Trump’s legal team, however, has said it found enough evidence to potentially overturn the election.

Braynard said he has signed declarations to go with his work, which is being used in court filings in five states.

Using Braynard’s findings, a legal group on Nov. 25 filed a lawsuit in Georgia alleging that more than 150,000 illegal votes were counted. The suit also alleges that 43,688 legal votes weren’t counted. 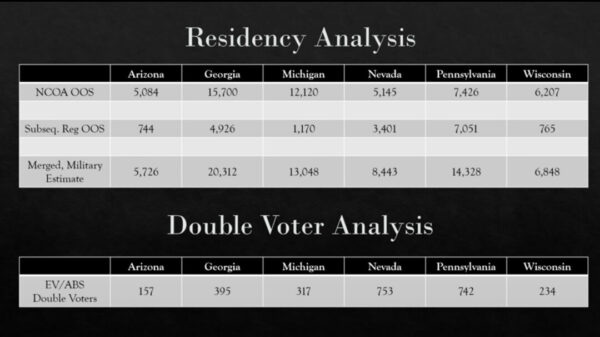 A screenshot of a summary of findings regarding the 2020 election and the residency status of voters, as well as those who are tagged as voting twice, according to data from Matt Braynard and team. (Screenshot/The Epoch Times)

Again in Georgia, Braynard found a further 1,000 people who registered to vote by using a post office box number, but attempted to disguise the box number as an apartment or suite number.

When registering to vote, by law, individuals must use their actual residential address as their residence. A P.O. box number can only be used as a mailing address. Homeless people can list a shelter, a soup kitchen, or even a parking lot as their residence.

He said almost all of those people voted early or absentee, rather than in person—at a rate far higher than the overall average.

“So that really raises a red flag because they’re illegally registered,” he said. “It sounds like a good problem for the FBI to solve.”

Braynard said he intends to share his findings with state law enforcement and the FBI. 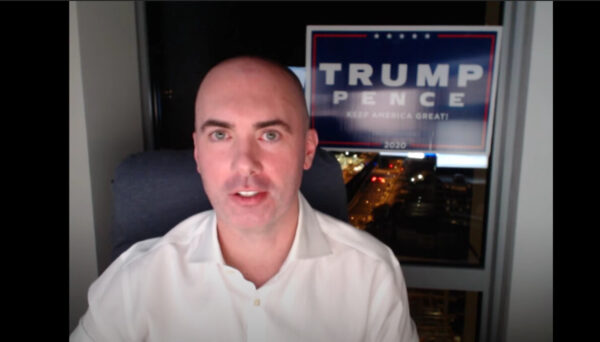 A screenshot of Matt Braynard speaking on a YouTube video on Nov. 8, 2020. (Screenshot/The Epoch Times)

The 2020 election saw an astronomical increase in mail-in balloting, which has been deemed as the ripest for fraud.

Nine states and the District of Columbia sent ballots to everyone on their voter rolls, whether they requested them or not.

Five of the six contested states that Braynard looked at required a voter to request a mail-in ballot, while Nevada mailed out ballots to everyone on its voter registration rolls.

In the five states that required a requested ballot, Braynard’s team found a significant number of people whom the state marked as having requested a ballot but not having returned it. Upon contacting those people, Braynard said many of them told his call team that they hadn’t requested a ballot at all. Others said they had requested and returned the ballot, but it hadn’t been marked as received or counted.

In Arizona, 44 percent of the people reached by phone said they hadn’t requested a mail-in ballot, despite the state receiving a completed ballot in their name.

In Michigan, that number was 24 percent; in Pennsylvania, 32 percent; and in Wisconsin and Georgia, 18 percent.

“Those are pretty startling numbers, because the question is, how? How did that ballot get requested? Who did that? Is it possible that people we talked to maybe lied to us or maybe did it and forgot about it? Was there a clerical error that could be this substantial?” said Braynard.

“Once they stripped those ballots out of those absentee envelopes, it becomes very difficult to come up with a real remedy.”

Within the group of people who did request a mail-in ballot, but the ballot was flagged as unreturned, between 15 percent and 33 percent of the people reached said they had actually returned their ballot.

In Pennsylvania, more than 160,000 uncounted mail-in ballots were requested by or in the name of registered Republicans. 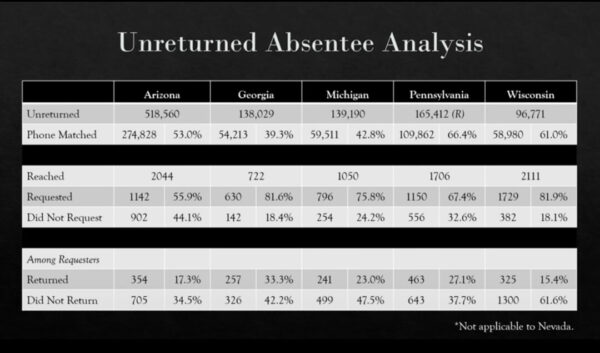 A screenshot of a summary of findings regarding the 2020 election and the issues with mail-in/absentee ballots, according to data from Matt Braynard and team. (Screenshot/The Epoch Times)

Braynard said he hopes his findings will help bring greater scrutiny to the election process, in particular the verification process of mail-in ballots (he suggests fingerprints instead of signatures), clean voter rolls, and the availability of open-source voting machine data.

“It’s unfortunate, but short of a judge ordering a do-over, another election … short of that, I really don’t see how you fix this,” Braynard said.

“This election, it appears to me, has been decided by ballots that are highly questionable. They’re anomalous.

“I cannot say with confidence who won this election. I don’t think anybody can.”

Does the Arizona Constitution provide means for lawmakers to crack down on Big Tech censorship?
Peter Navarro releases mind-blowing third volume of report regarding depth of 2020 election fraud proving yet again that Trump’s victory was stolen
RIGGED: Michigan print shop created fake ballots for Pennsylvania, other swing states
We are going to turn over every rock – Arizona GOP calling for very thorough election investigation
DoJ adviser says 368,000 fraudulent votes across multiple swing states resulted in Biden “win”
Probe in Arizona by citizens group turns up thousands of fake voters revealing that as much as 30% of addresses were fake
Nevada’s secretary of state busted exporting sensitive voter data to Pakistani company
Arizona Gov. Ducey to China: ‘Lots of opportunities’ to exploit ‘our defense industry, mining and ores’
Governors have usurped legislative role on electoral votes, lawsuit charges
LISTEN: DOD insider caught on tape admitting that illegal ballots were offloaded from plane in Arizona