Bombshell video: Young internet sleuth reveals evidence from PA gov website showing over 23K PA ballots were filled out and returned before they were ever mailed to voters (and MORE)

(Natural News) On November 11, Petr Svab of the Epoch Times wrote about the improbability of more than 10,000 ballots being returned in the state of Pennsylvania on a date that precedes the date they were sent. The article, as one would expect, was completely ignored by the Democratic Party mainstream media.

On November 11, Petr Svab of the Epoch Times wrote about the improbability of more than 10,000 ballots being returned in the state of Pennsylvania on a date that precedes the date they were sent. The article, as one would expect, was completely ignored by the Democratic Party mainstream media.

Here’s something else that didn’t receive any traction in the media, the investigative work of a young citizen journalist, known as “Greg On The Right,” may have provided the single biggest piece of evidence to date that Pennsylvania’s elections were anything but free and fair.

In a 3-part video series, the young man, known as “Greg on The Right,” first posted his explosive video from the PA.gov website on Tik Tok, where curiously, it was removed. Greg promptly posted his video to Twitter, where he has a little over 5.6K followers. 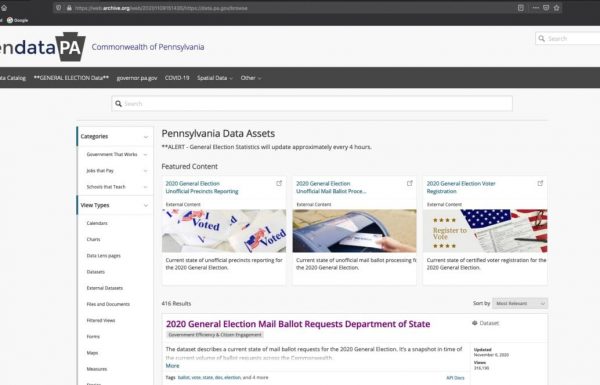 In his first of a 3-part series of videos, Greg explains that he could only review about one-third of the data set related to the mail-in ballots on the PA.gov website.

From “Greg On The Right:”

The following information’s straight from the PA.gov website and has almost 3.1 million entries. I exported all that information into an Excel sheet, but I was cut off at about 1 million rows, so keep in mind, we’re working with one-third of the whole data set.

So, the first thing I did was to create a column to see if any ballots were mailed out by the government the same day that they were received, filled out, through the mail, by the voter.

And lastly, I created a column to see if there were any ballots that were received through the mail, filled out before they were even mailed out and received by the government. There were 7,403 cases of that.

If anyone’s able to make sense of these numbers without saying it’s fraud, please let me know in the comments.

My video on PA mail-in ballots got removed by TikTok. Here’s part 1 pic.twitter.com/sNclOHwgNE

On this page, we have the total amount of ballots that the Pennsylvania government sent out through the mail. 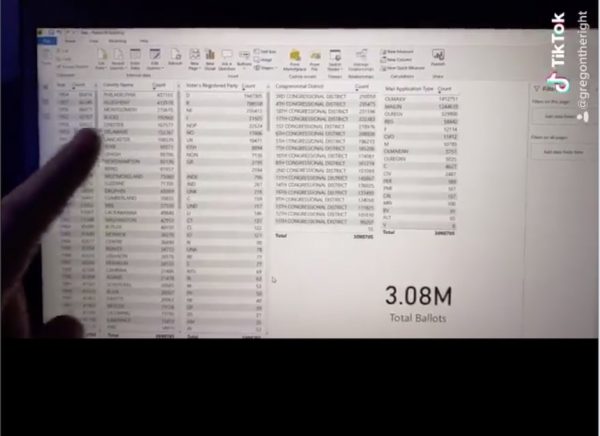 Here on the left, we have the year the voter was born, the county name that they reside in, their registered party, the congressional district, and the application type.

This page shows the amount of ballots that were mailed out by the Pennsylvania government but were never returned. 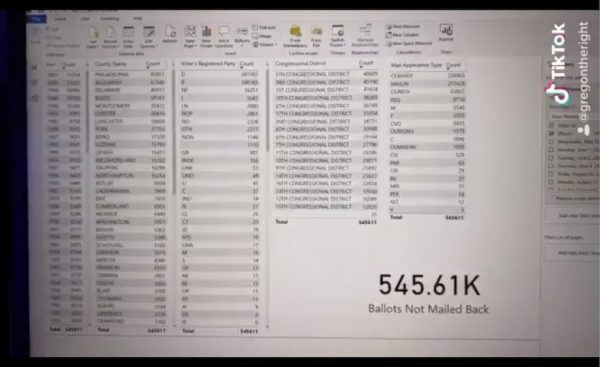 This page shows the amount of ballots that were mailed out by the government and received and filled out by the voter on the same day. 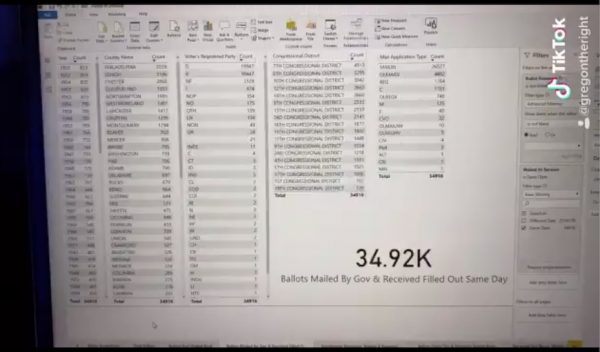 This page shows the amount of mail-in ballots that were approved, mailed out and received, and filled by the voter on the same day. 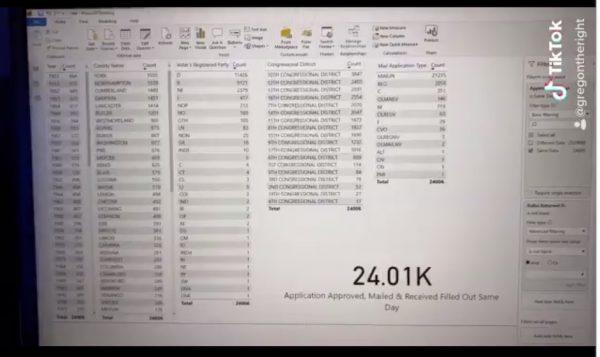 This page shows the amount that were returned and filled out by the voter before they were even mailed out! 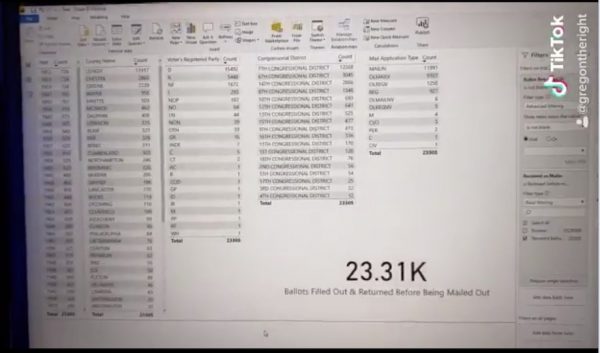 And lastly, this page shows the amount of mail-in ballots that were returned by the voter, but never mailed out to the voter! 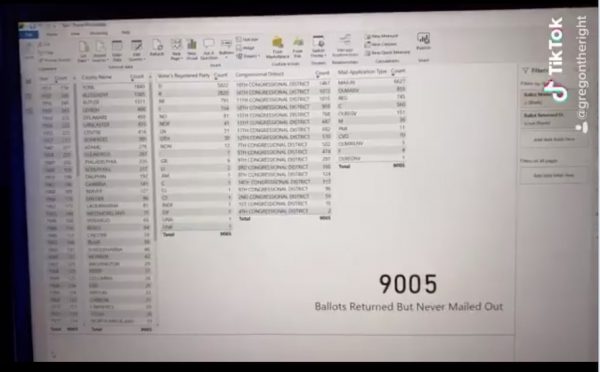 Part 2 of the videos that got removed by Tiktok https://t.co/MEMtGs5zol pic.twitter.com/fMaWJbWqAt

In this video, Greg gives viewers an up-close and easy to understand example of how in what can only be described as “impossible,” a ballot was mailed out by a voter two days before the PA government ever mailed the ballot out.

Part 3 of the videos that got deleted by tiktok #2020election #ballots #pa https://t.co/iejrhtomKV pic.twitter.com/EphsT8knR9

On the same day that Greg posted his videos to Twitter, he received a message from the Knox Tea Party informing him that the dataset from the November 2020 election has been removed from the PA government website. According to Greg, who spoke to 100 Percent Fed Up today, the data appears to have been moved, and the state of PA requires anyone who wants to see the data, to pay $20 for the privilege. We cannot confirm if the data on the PA.gov website has been amended since Greg first videotaped his findings or if the dataset he’s provided remains the same.

An article written by Petr Svab of the Epoch Times seems to back up many of the young data sleuth’s allegations, who goes by “Greg On The Right.”

From the Epoch Times– More than 20,000 absentee ballots in Pennsylvania have impossible return dates and another more than 80,000 have return dates that raise questions, according to a researcher’s analysis of the state’s voter database.

Over 51,000 ballots were marked as returned just a day after they were sent out—an extraordinary speed, given U.S. Postal Service (USPS) delivery times, while nearly 35,000 were returned on the same day they were mailed out. Another more than 23,000 have a return date earlier than the sent date. More than 9,000 have no sent date.

The state’s voter records are being scrutinized as President Donald Trump is challenging the results of the presidential election in Pennsylvania and other states where his opponent, former Vice President Joe Biden, holds a tight lead. The Trump campaign is alleging that invalid ballots have been counted for Democrats and valid ballots for Republicans were thrown away.

Previous :Vermont authorizes schools to ask kids to rat on parents who celebrated Thanksgiving with others
Next : DAMNING proof of biased media using COVID reporting as POLITICAL weapon against states that vote ‘wrong’
Receive Our Free Email Newsletter