The magical Democrat TIME MACHINE: Ballots in Pennsylvania were received BEFORE they were mailed out

(Natural News) A Twitter user with the handle “V_C_435” put together an extensive analysis outlining numerous anomalies in the official Pennsylvania vote count.

Almost unbelievably – but these are Democrats we are talking about, so it all makes sense – mail-in ballots were somehow returned fully filled out before they were even mailed out, according to the official data.

This is obviously impossible, but that is how these anomalous ballots were logged into the system and counted, raising many questions about what kind of sorcery led to such an outcome.

In the below plotted graph, you will see all of the “suspicious” ballots – meaning those that were returned before being mailed out, the same day, or at the latest the following day – listed in red. In total, V_C_435 identified 109,421 of these suspicious ballots: 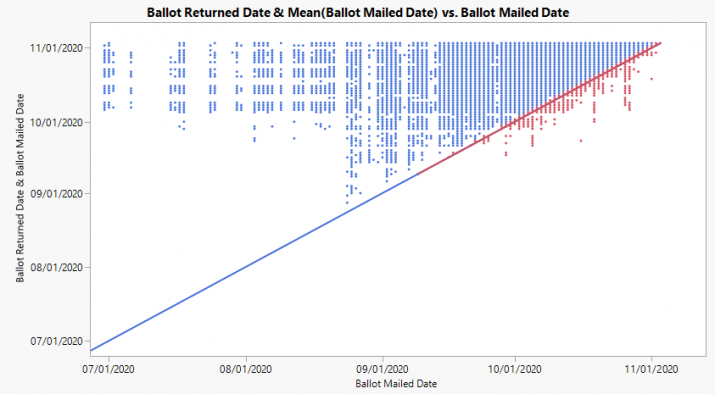 V_C_435 pulled this data straight from Pennsylvania’s official general election website, by the way, fulfilling the left’s demand for “evidence” of voter fraud, which the mainstream media continues to claim does not exist.

It sure seems to exist in the official data, we would stress, which you can view for yourself by following on V_C_435’s Twitter feed.

“If you look at those ‘suspicious’ mail-in ballots – most of them come from PHILADELPHIA and LEHIGH – around 44%,” V_C_435 notes about the two usual suspects where vote fraud is almost expected.

Why did military and overseas ballots suddenly start arriving faster than local ballots in Pennsylvania?

This account goes into much greater detail as to the specifics of the “suspicious” ballots, including their breakdown by area and demographics. Suffice it to say that something extremely shady went on that effectively eliminated President Trump’s nearly 800,000-vote lead in Pennsylvania, delivering the state – at least according to the media – to Biden.

The distribution of when ballots were sent out and when they were received does not follow normal patterns in Pennsylvania, V_C_435 reveals. There are also noteworthy problems with what V_C_435 describes as “fast” ballots, which suddenly started arriving much more quickly than previous ballot batches.

Another strange occurrence is that military and overseas ballots suddenly started arriving three days faster than those sent in by the general population, which makes no sense.

Other strange details parsed out in the thread include sudden bursts of “suspicious” ballots from certain age groups and counties. In the counties of Centre and Union, for instance, large drops of suspicious ballots arrived from mostly younger voters, while in Cumberland, Greene, and Lehigh, suspicious ballots came from older folks.

“Again, these are the counties where ‘suspicious’ – i.e. SAME DAY ballots, have significant demographic deviation from the rest,” V_C_435 points out.

“Specifically – much younger (Students from Penn and Bucknell?) and much older people. And it’s only a subgroup of all the ‘suspicious’ ballots.”

In Lehigh, which is perhaps the most damning of all, some of the ballots supposedly mailed out on Oct. 19 were received two days earlier on Oct. 17. This would seem to suggest that Democrats have some kind of time machine whereby they were able to travel back in time and vote really, really early, defying the space-time continuum.

As more revelations come to light about this contested election, we will inform you about them at Trump.news.