Marxist BLM terrorist gives America fair warning: ‘We are going to fight, we are in a war’ – prepare for all-out leftist mayhem in the days and weeks ahead

(Natural News) With the 2020 election going nearly exactly as we thought it would, with no clear winner on Tuesday night and the ‘race’ threatening to drag on for days if not weeks (though Democrats will be sure to declare the vote-counting ‘over‘ as soon as Joe Biden has the electoral college votes/states he needs, even if ‘all the votes’ aren’t counted!), Americans all across the country need to listen to the words being uttered by radical leftists across the country then decide themselves what they should be doing.

As the Daily Mail reports in this recent story, according to one activist from the Marxist-terror group ‘black lives matter’, “we are going to fight…we are in a war.” And with her words actually echoing the actions of many leftists with blm/antifa already clashing with President Trump supporters outside the White House and in various locations across the nation, law-abiding Americans better continue to ‘arm up’ and prepare for mayhem as November gets kicking with still no official election ‘winner’ being declared. From the Daily Mail before we continue.:

Ava DuVernay gave a passionate speech at a Black Lives Matter event at Staples Center where she urged voters to participate in the 2020 election. As the Oscar-nominated filmmaker hosted the rally, she emphasized that regardless of the results of the presidential race, the movement against police brutality and racially motivated violence on Black people needed to continue.

She continued: ‘This moment is not an end all be all. This vote, this election is not even the half of what is ahead of us and what needs to happen tomorrow and the next day and the next day. But it is a tool, it is a weapon in our arsenal and we are going to fight. We are in a war.’

And with federal US government workers recently caught in a zoom call plotting a White House coup while earlier in October, one Biden-supporter showed us how many Democrats are likely thinking in 2020 when he stated “I will lie. I will cheat. I will steal to win 2020”, anyone who believes that Democrats will just ‘allow’ President Trump to win this election when they’ve been committing treason and sedition against him and America for the past 4 years is gravely mistaken. 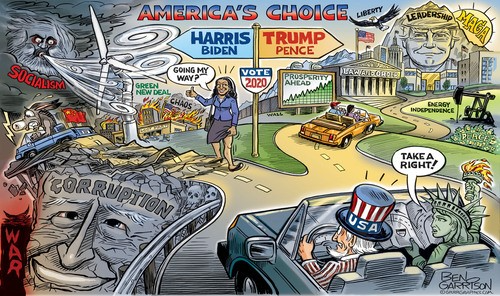 And President Donald Trump clearly knows what the Democrats are up to. Warning in an early Wednesday morning fundraising email that Democrats are planning on stealing this election and ‘it’s time to defend your president’, with Democrats recently colluding with the CIA to alter voting machine results in Pennsylvania and other ‘swing states’, who’ll be able to take those results seriously should Joe Biden emerge on top in the days/weeks ahead? From this Natural News story:

Dave Janda of Operation Freedom (www.DaveJanda.com) has unleashed a bombshell story with huge implications for Tuesday’s elections. Janda’s guest in his latest broadcast is a former high-level intelligence official (Lt. Gen. Tom McInerney) who warns that the Dems and the CIA have put in place a mechanism which can alter the voting results of electronic voting machines in key swing states (like Pennsylvania) that will determine the outcome of the election.

This covert technology is called Operation Scorecard, and it was built by the CIA to surreptitiously steal elections in targeted countries. Now, that technology is being turned against the United States of America and is about to be activated on Tuesday to steal the election for Biden, explains Janda’s guest.

Read more at: AllNewsPipeline.com and LiberalMob.com