(Natural News) Rudy Giuliani has vowed to “expose the corruption of the Democratic Party” by lifting the lid on alleged “voter fraud” in Pennsylvania.

The former New York City mayor is on the ground conducting investigations in PA following allegations of discrepancies in the vote count for the state.

President Donald Trump sent Giuliani and his son Eric to Pennsylvania on Wednesday.

Trump’s campaign has mounted a challenge to the state’s Supreme Court decision on the deadline for mail-in ballots while the president’s wide lead in Pennsylvania appeared to “magically disappear.”

“I don’t know if this is going on any other place … What it says to me is this is a concerted effort of the crooks who run the Democratic Party,” he said. 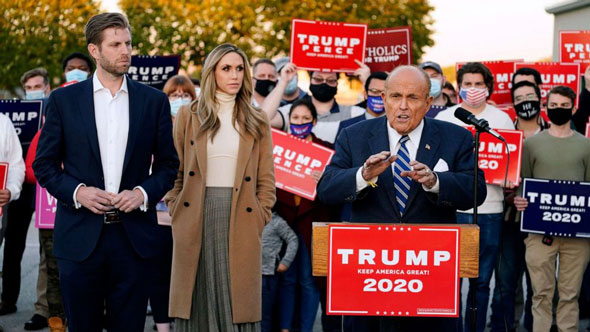 “You know these big-city machines are crooked,” Giuliani continued.

Giuliani and other members of President Trump’s campaign team were in the city to cite alleged irregularities at a Philadelphia polling station, where Republican observers were allegedly blocked from verifying the authenticity of ballots, according to The Daily Caller.

The campaign is suing Pennsylvania to stop the counting of mail-in ballots.

Although Trump is currently leading in the state, uncounted votes could give the state to Democratic presidential candidate Joe Biden.

“Voter fraud is one of the biggest [problems],” Giuliani told a news conference.

“But we’re not going to let them get away with it.

“They’re not going to steal this election.

“This election gets decided by the people.

“These people, the elite, they don’t care about the people: the people are the ‘deplorables, the chumps’  — they’re not important,” he said in reference to names used by former Democratic presidential nominee Hillary Clinton and Joe Biden to refer to Trump supporters.

State officials have countered claims of voting irregularities and fraud by saying they are processing ballots in a careful and conscientious manner.

Giuliani insisted that fighting for the average voter was “the whole reason” that Trump ran for office and “the whole reason for which he’s carrying on this campaign — so that your vote can mean something.”

He promised that the campaign’s lawsuit would help identify “100,000 fraudulent, meaningless paper ballots that no one gets to observe.”

He said more lawsuits would come in other Rustbelt states — and perhaps beyond.

“We’re going to take a very good look at whether we bring this nationally,” Giuliani said, suggesting that further litigation would “really expose the corruption of the Democratic Party.”

“This is beyond anything I’ve ever seen before.

“This comes when you think you have so much power and you own the media, that you can do anything you want.”

The personal attorney to the president asked why the state has not been called for the Republicans when so much of the vote has been counted and Trump remains in the lead.

“They called California the moment the polls closed. How many votes do you have to be ahead?” Giuliani asked.