(Natural News) A new low for the liberal media. A major American network censoring the President of the United States on election night!

Not only is Scarborough planning to do it: they’re gleefully bragging about it!

“We’re going to be doing coverage on Peacock, and we can assure you, if Donald Trump goes out and declares victory, we will be there to say: don’t take the feed. It’s not going to happen!”

But what if the media declares that he won? The MSNBC crew can’t imagine a 2016 repeat. They are guessing that the result will be unknown for days.

“Don’t take the feed”: in other words, Joe the Censor will prevent the American people from hearing from President Trump at a crucial moment in the life of the country. And not only is Scarborough, trumpeting Team Peacock censorship plans, he’s gleefully bragging about it. Outrageous. 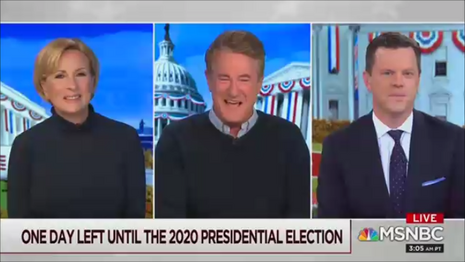 Joe Scarborough bragging about censoring President Trump on election night was sponsored in part by Chevrolet. Contact Chevrolet at the Conservatives Fight Back link, and let them know what you think about this kind of outrageous censorship.

WILLIE GEIST: It’s going to be a wild night, and Donald Trump has already signaled that. He said, effectively, we’re going to flood the zone with our lawyers, we’re going to send them into Pennsylvania and Michigan and Wisconsin.

And we are going to dispute this election—no matter what happens he’s already saying that. Meanwhile, there’s some reports that say he could go out and declare victory as early as he can on Tuesday night. Of course he will not have won [Scarborough laughs uproariously], but he’ll go out and try to say it anyway.

JOE SCARBOROUGH: We’re going to show you — we’re going to be doing coverage on Peacock, and we can assure you, if Donald Trump goes out and declares victory, we will be there to say: don’t take the feed.

SCARBOROUGH: [big smile] It’s not going to happen! We’re not going to be part of any disinformation campaign by anybody. We’ll be doing coverage from 6 pm until midnight, or until this thing’s over.