Journalist who exposed Planned Parenthood: Kamala Harris weaponized her office to punish me on behalf of her donors

(Natural News) Sen. Kamala Harris (D-CA) has a history of abusing the powers of her office to target and punish Americans she disagrees with. I know firsthand that Harris is one of the biggest threats to First Amendment civil liberties that our country has ever seen because I have been on the receiving end of her unconstitutional abuses of power when she was California’s attorney general.

In 2015, after I released undercover videos of taxpayer-funded Planned Parenthood officials trafficking the body parts of live-aborted fetuses, Planned Parenthood was desperate and furious. The organization turned to Harris, its political patron in the California Attorney General’s office, for help to silence me and my message. Though local law enforcement made it clear to Planned Parenthood that the California videos were recorded in public places and were perfectly legal, the abortion provider and its allies within the state Department of Justice conspired to enforce California’s video recording law for the first time ever against newsgathering, in order to punish me for speaking out.` 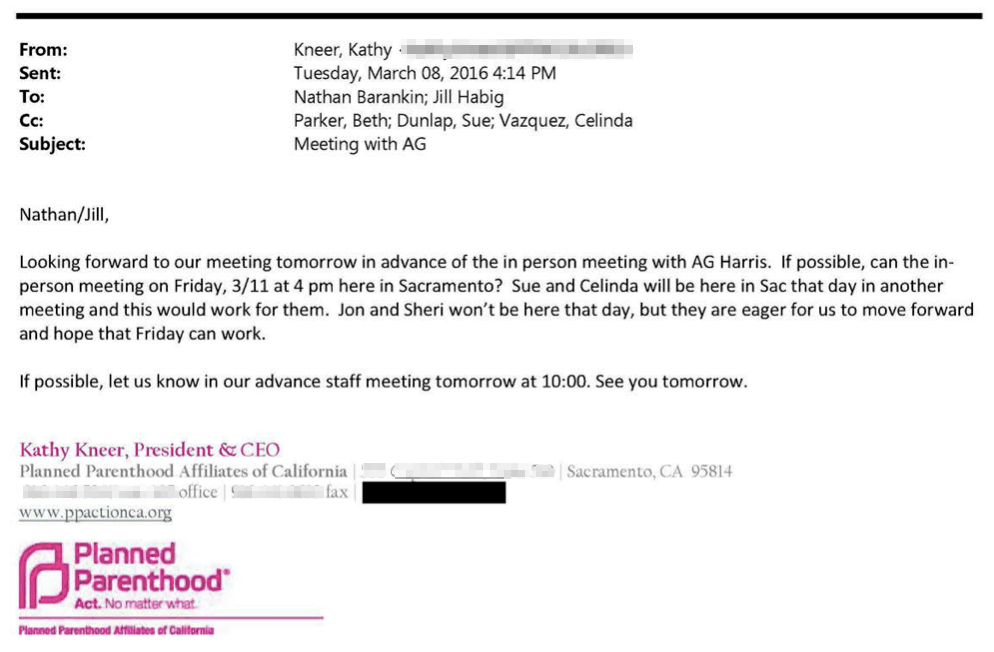 A March 8, 2016 email from Planned Parenthood of California’s president to Attorney General Kamala Harris’ office to set up a meeting. 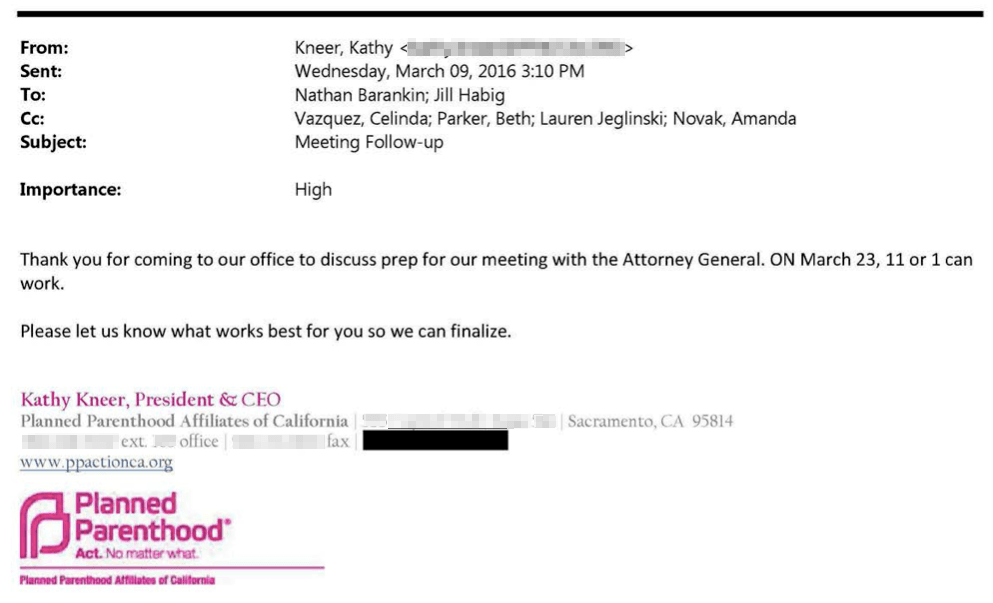 Less than two weeks later, Harris ordered a raid on my home, with explicit instructions to seize the laptops and hard drives I was using to publish my undercover video reporting.

April 5, 2016, was an idyllic spring day in southern California. Around lunchtime, I cooked a Greek chicken lunch in my Orange County apartment complex. As I took the grocery scraps out to the parking lot dumpster, the door of a giant white van slid open and a pack of California Department of Justice agents filed out as other law enforcement vehicles swerved into the parking lot with more. They demanded to search my home for evidence of video recordings. I was astounded. The team of eleven armed agents overturned every box, file, and furniture item in my one-bedroom apartment. They seized all of my laptops and hard drives going back to high school. For the first thirty minutes, they refused to let me call my lawyers. Most damningly of all, they thumbed through copies of invoices from Planned Parenthood’s business partners for late-term aborted baby body parts, yet conspicuously left them behind. Apparently Kamala Harris had already decided that anyone selling body parts was innocent, and anyone exposing the sales, guilty. 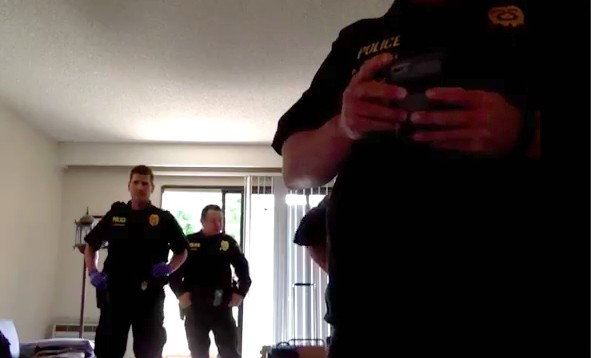 Image taken during the April 5, 2016, raid on David Daleiden’s home by California Department of Justice officers. (Courtesy of David Daleiden)

Image taken during the April 5, 2016, raid on David Daleiden’s home by California Department of Justice officers. (Courtesy of David Daleiden)

Does anyone doubt that if I had been investigating and publishing undercover video reports on unlicensed gun sales, factory farming, or unsanitary grocery practices, that Harris never would have dreamed of raiding my home? Local news reporters in California tape and publish undercover conversations with corrupt chiropractors in their offices, fraudulent repairmen in private homes, and vendors in unlicensed marijuana dispensaries, but are not prosecuted under the California video recording law. Yet I, who filmed in crowded public restaurants and hotel lobbies, had my home raided and face the first-ever criminal charges for newsgathering under the recording law. Is there any doubt why Kamala Harris subjected me alone among undercover video reporters in California to this selective standard of “justice”? It is because I dared to question Planned Parenthood and the abortion industry, and to speak the truth: Planned Parenthood sells baby parts.

Harris’s deputy prosecutor, Johnette Jauron, admitted in a court filing that the California Department of Justice brought this first-ever case against undercover news reporting solely because of the content of my message, writing that what made me different from other reporters was that my videos “were edited to enhance their shock value” and that therefore I was “culpable to a greater extent.” That is why I’m suing Kamala Harris in Los Angeles federal court for conspiracy to violate First Amendment civil rights. Obviously, I disagree that my videos were edited for shock value—what the raw footage shows Planned Parenthood doing is shocking enough—but highlighting the significance of your message is part of everyone’s right to free speech.

While Harris was busy doing Planned Parenthood’s bidding and silencing the messenger, local law enforcement at the Orange County, California, District Attorney’s Office (OCDA) was using my undercover reporting to investigate Planned Parenthood’s fetal trafficking business partners. In late 2017, in a $7.8 million settlement with the OCDA, DaVinci Biosciences admitted guilt for illegally selling body parts from abortions at Planned Parenthood of Orange & San Bernardino Counties (PPOSBC). The company was shut down and the OCDA credited my undercover work with prompting the successful case. If Harris and Planned Parenthood had their way, the DaVinci company would still be selling baby body parts across the country to this day.

By the way, who was one of the Planned Parenthood executives in that meeting with Harris? Dr. Jennefer Russo, the VP Medical Director and top abortion doctor for PPOSBC, who had supplied body parts to DaVinci. I only knew to report the DaVinci-Planned Parenthood relationship to local law enforcement because I recorded Dr. Russo’s admissions about it undercover. It’s not hard to imagine her real reasons for wanting Kamala Harris to investigate me instead.

Because Harris weaponized her office to punish opposing views and cover up the criminality of her patrons, my life has been turned upside down in the past four years. The lives of my friends and colleagues have been irreparably damaged and disrupted. No American should ever have to fear punishment by the State for the content of their speech.

I speak for many Americans in all walks of life when I say that I am afraid we are losing the ability to listen to one another. In order to be free to listen, we must be free to speak without the threat of retaliation or censorship from the government. I will never bow to Harris’s radical disrespect for our freedoms to speak and think for ourselves. I hope that all Americans will unite together against her extremist attacks on First Amendment freedoms.