(Natural News) Following the publication of the New York Post’s bombshell story about the Biden family’s business dealings in Ukraine, Facebook and Twitter worked hard to suppress the story across their platforms. The censorship comes just weeks after executives from both firms joined the Biden transition team.

Breitbart News recently reported on the New York Post’s bombshell story that indicated that Joe Biden may have met with an adviser to the board of Burisma while he was Vice President, arranged by his son Hunter, who was working as a lobbyist for the company at the time. Joe Biden has previously said, “I have never spoken to my son about his overseas business dealings.”

But, the leaked emails allegedly show that Hunter introduced his father to a Bursima executive less than a year before Biden, acting as Vice President, pressured the Ukrainian government into firing a prosecutor who was investigating the company. Shortly after the story broke, many found themselves having trouble sharing it across social media. This censorship comes just weeks after executives from both Facebook and Twitter joined the Biden transition team.

Breitbart News reported in September that Twitter Public Policy Director Carlos Monje left the social media company to join the transition team for Joe Biden. Monje’s specific role on the team has not been made clear and Biden’s transition team reportedly declined to comment on the situation.

Despite a specific role not being named, Monje will reportedly be serving as co-chair of Biden’s infrastructure policy committee and has already helped to host a fundraiser for Biden this week, according to an invitation sent to Politico.

Monje has worked in the world of presidential transition politics in the past, previously serving as the director of agency review on the team that prepared for Secretary of State Hillary Clinton’s administration, which failed to take flight. Monje also worked on the Obama administration team’s 2008 national security working group according to his LinkedIn profile.

Monje also acted as deputy policy director during Obama’s first run for office and subsequently served as a senior policy advisor and special assistant to the president on the Domestic Policy Council. Monje’s final years in the administration were spent in the Transporation Department before he departed for Twitter.

In October, Breitbart News further reported that Biden’s transition team had hired top Facebook executive Jessica Hertz to its general counsel to oversee ethical issues. The move reportedly came as the campaign struggles with Facebook to have posts by President Trump censored on the platform. This is the second Big Tech executive to join Biden’s campaign. Hertz will reportedly be responsible for “enforcement, oversight, and compliance” of the ethics plan that Biden’s team unveiled this week.

New York Post op-ed editor Sohrab Ahmari was one of the first to note that Twitter was blocking him from posting a link to the Biden-Ukraine story, claiming that the link was “potentially harmful.”

This is a Big Tech information coup. This is digital civil war.

I, an editor at The New York Post, one of the nation’s largest papers by circulation, can’t post one of our own stories that details corruption by a major-party presidential candidate, Biden. pic.twitter.com/BKNQmAG19H

The Post’s business reporter, Noah Manskar, later claimed that the publication’s official Twitter account was also locked after posting links to the story:

The Post's primary Twitter account (@nypost) has also been locked because the Hunter Biden stories violate its rules against "distribution of hacked material," per email we received from Twitter https://t.co/wbeYd6c3CA

In response to this, the House Committee on the Judiciary posted the story to their own official government website in the hopes of bypassing the blocking of the Post’s URL.

Twitter has blocked users from tweeting the link to the @nypost's story on Hunter Biden.

But Twitter promptly censored an official government website with a warning instructing users that they should not click on the link calling it “potentially unsafe.” It unblocked the site saying it was marked unsafe “in error” after Breitbart Tech requested comment on the extreme measure. 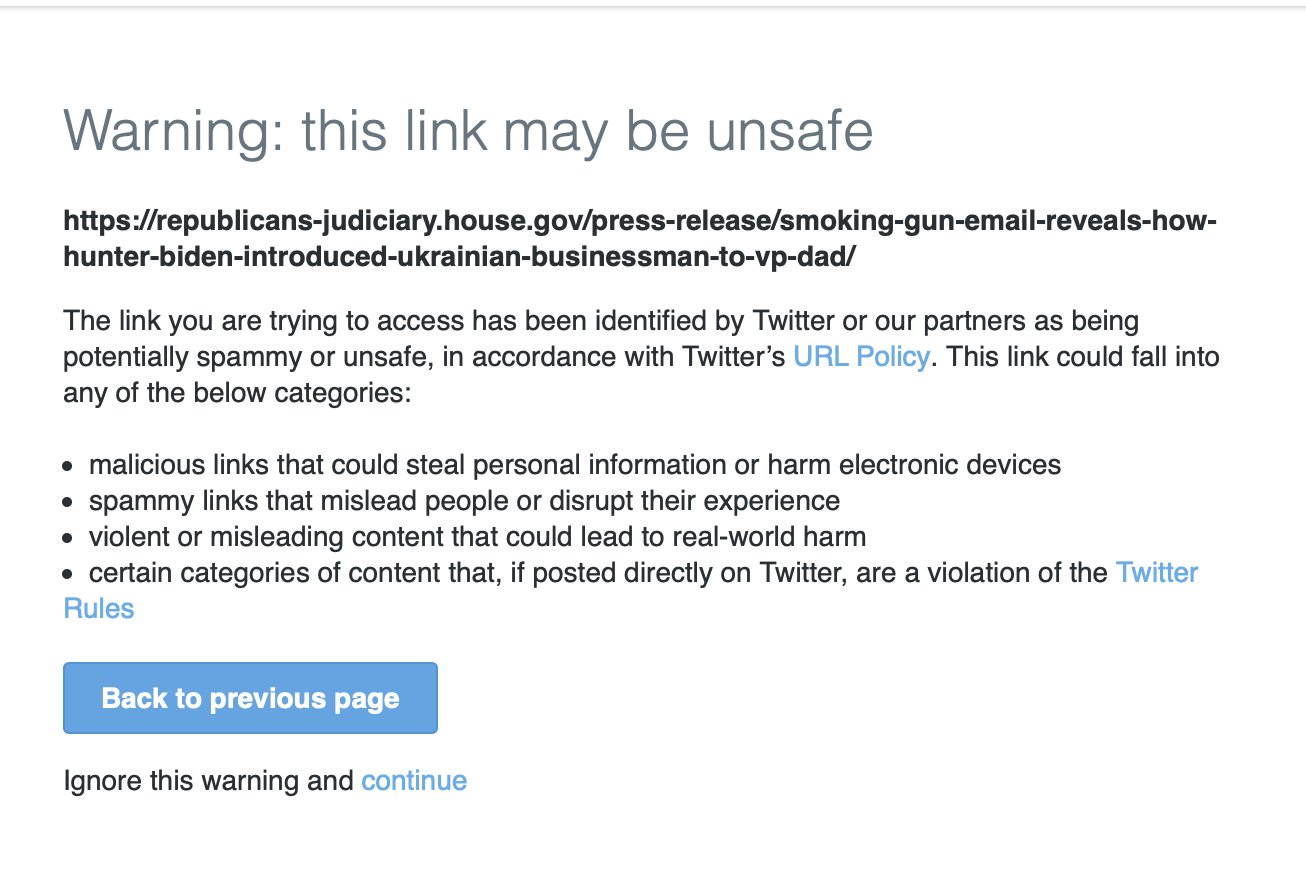 The House Judiciary responded to this by posting the link to the website of Rep. Jim Jordan (R-OH).

Social media giant Facebook also attempted to suppress the story, in a tweet Andy Stone, who works for communications at Facebook and is a former Democrat staffer, stated that Facebook would be reducting the story’s distribution until third-party fact-checkers had verified the report, a level of scrutiny not often applied to news stories on Facebook:

While I will intentionally not link to the New York Post, I want be clear that this story is eligible to be fact checked by Facebook's third-party fact checking partners. In the meantime, we are reducing its distribution on our platform.

Sen. Josh Hawley (R-MO) slammed Facebook’s decision to quash the virality of the Post story, writing in his letter to Zuckerberg:

The seemingly selective nature of this public intervention suggests partiality on the part of Facebook. And your efforts to suppress the distribution of content revealing potentially unethical activity by a candidate for president raises several additional questions, to which I expect responses immediately.

Breitbart Tech will continue to report on this story.