Tuesday night: Join the Health Ranger in live tweeting the Trump vs. Biden debate on Brighteon.social

(Natural News) The first debate between Trump and Biden is taking place tomorrow, Tuesday, at 9 pm Eastern Time through 10:30 pm. This debate will be held in person in Cleveland, Ohio. Fox News anchor and anti-Trump propagandist Chris Wallace will be the biased moderator. Just like with Hillary in 2016, Joe Biden has already been given the answers in advance and has been coached on how to answer those questions. He will likely also be wearing some sort of earpiece and hopped up on amphetamines so that his brain can temporarily function long enough to appear functional.

As you might imagine, Chris Wallace will pitch softballs to Biden while trying to hammer Trump with trick questions. The bias will be self-evident.

I will be “live tweeting” the entire debate at Brighteon.social which is the new alternative to Facebook and Twitter. You can join now for free at https://Brighteon.social

Once you join, you can follow ALL the posted comments by clicking on “Live Stream” in the left-side navigation column, or you can go to my specific channel (@HealthRanger) and click the FOLLOW button. 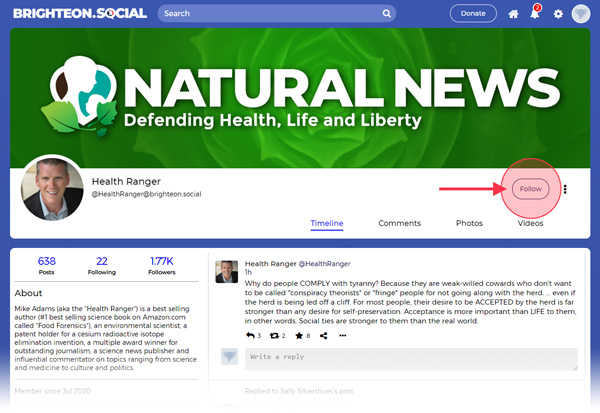 Once you follow the @HealthRanger channel, you’ll automatically see all my posted comments on your HOME page at Brighteon.social. You can also follow other channels to see their posts.

During the presidential debate — assuming it actually takes place — I will be tweeting comments about the debate while eating non-GMO popcorn.

It’s difficult to tell in advance what’s going to happen, but Joe Biden merely showing up and bring able to speak would be something of a miracle.

Join Brighteon.social today to take part in the live coverage of the first debate.

Previous :Based on latest CDC data, the Wuhan coronavirus poses virtually no death risk whatsoever for people under the age of 50
Next : INTERVIEW: Dr. Jerome Corsi details deep state plans to take out Trump before Jan. 20th, and how Trump can defeat the traitors and save America
Receive Our Free Email Newsletter

Posting videos on YouTube is ANTI-AMERICAN because it enriches Google, an enemy of this nation and ally of communist China
The best UNCENSORED sources for real-time breaking news on everything: Brighteon.social, Censored.news and Brighteon.com
Tuesday night: Join the Health Ranger in live tweeting the Trump vs. Biden debate on Brighteon.social
Brighteon.social is EXPLODING in popularity as thousands of channels join new free speech alternative to Facebook and Twitter
Thousands of people have joined Brighteon.social to exercise free speech about vaccines, Christianity, Trump and other topics that get banned by Big Tech
Brighteon.com announces military, police and first responder discount across the entire Brighteon Store, featuring nutrition, food and preparedness products
Pandemic Town Hall: Doctors speak about coronavirus therapies which are blocked by authorities
Twitter blocking Brighteon and Bitchute in attempt to silence ALL alternative video platforms
Terrence Popp from Redonkulas.com warns of impending civil war
YouTube reverses two-year ban of The Health Ranger, then bans the first video that’s uploaded which urges viewers to move to Brighteon.com