(Natural News) A tweet encouraging arson in Louisville, Kentucky, posted a day before violent riots once again broke out across multiple American cities including Louisville, did not violate the Twitter rules, according to a spokeswoman for the social media giant, despite the company dedicating itself in 2018 to improving “conversational health” on the platform.

The tweet included a picture of the vlogger and one other person holding raised fists, wearing masks bearing the name “Breonna Taylor.”

While the account itself is not particularly influential, Twitter’s official response to the tweet indicates that the platform has a high tolerance for tweets promoting the domestic terrorist violence that has been endemic in American cities over the past four months. 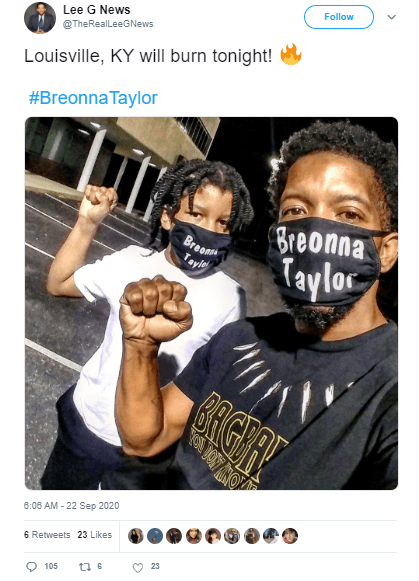 The tweet was later deleted by the author, but evidence of its existence can be found in internet archives.

In the wake of the Breonna Taylor ruling, multiple other twitter users posted viral tweets with similar sentiments, with no action taken by Twitter to prevent their spread. In fact, it became a trending topic on the platform, which made a commitment to improve “conversational health” in 2018.

“…burn it all down,” said Guy Ben-Aharon, a Twitter user with a “verified” checkmark — the platform’s stamp of approval.

And I hope they burn Louisville down tonight, yll hear me? Burn it down, the college the precincts the whole thing

“I hope they burn Louisville down tonight … Burn it down, the college the precincts the whole thing,” said another user in a tweet that gained hundreds of retweets.

I hope They burn down the entire city of Louisville ❤️

“I hope they burn down the entire city of Louisville,” says a tweet that gained over four hundred retweets.

The violence being encouraged by Twitter users, with the tacit approval of the platform, has already led to two police officers being shot in the city of Louisville. The two officers are currently being treated and are reportedly in a stable condition.