New PrepWithMike video: How to make your own emergency FIRE STARTERS for survival, preparedness and off-grid cooking

(Natural News) When the power grid goes down, or you’ve had to evacuate your home due to storms, fires or floods, you need a way to boil water and cook emergency meals without using electricity.

The answer is to use a camp stove (outdoors) that allows you to boil water. From here, you can make pasta, tea, soup, etc. Or you can use the flame to scramble eggs or cook potatoes, for example.

But how do you start a fire for your camp stove if you don’t have a lighter? Emergency magnesium fire starters are popular, but very few people know how to use them. (They own them but have never used them.)

In addition, using magnesium to initiate a fire with leaves, twigs or grass is very difficult. So in this latest PrepWithMike video, available at PrepWithMike.com, you’ll learn how to make your own emergency fire starters using cotton balls and petroleum jelly that help you get an emergency fire going for survival / off grid purposes (obey all fire safety rules and regulations, see below, don’t be the idiot who starts a wildfire…).

With these items in hand, you can easily start a small fire with a magnesium fire starter, then use grass, leaves, pine cones or other small items to get a small camp fire going (or use a rocket stove).

As a safety note, given the extreme fire hazard conditions now present in Western states, obviously take every precaution to limit the size of your fire and control the flames. Don’t be the idiot who sets fire to another 50,000 acres like recently happened with a California “gender reveal” party gone bad…

It’s always a good idea to have a bucket of water nearby in case you need to extinguish flames, and never leave fires unattended. Even in this video, you can see I had a fully charged fire extinguisher handy: 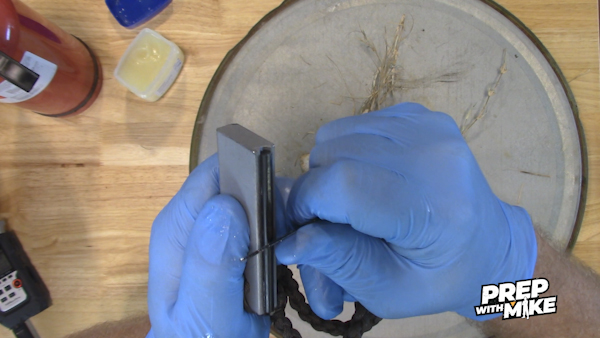 Watch the full video now at PrepWithMike.com, which also lists real-time, in-stock preparedness and survival products from the Health Ranger Store (scroll down below the videos and podcasts to see the product listings).

This video was filmed before the recent wildfires went crazy, by the way, and the entire focus of this video is for emergency survival and preparedness / off grid cooking.

New PrepWithMike video: How to make your own emergency FIRE STARTERS for survival, preparedness and off-grid cooking
Fire is a versatile survival asset – Here’s a list of things you can cook over it
Bitten by a snake? Here’s what you should do
Small and incredibly dangerous: Follow these tick safety tips to prevent infections
Survival medicine: How to stop bleeding injuries
Aluminum camping cookware lab tested by the Health Ranger: Is it safe to use?
Smelling dirty socks can give you a fungal infection
Lyme disease: What it is, how to avoid it, and how to prepare for it
A step-by-step guide to making your own #10 can oven
5 practical (and life-saving) items from the Health Ranger Store for your next hiking or camping expedition