Bokhari: By suppressing medical debate, it is Twitter that endangers Americans

(Natural News) Twitter has once again acted as judge, jury, and executioner. For four days, Twitter prevented the @BreitbartNews twitter account from posting, only restoring its permissions earlier today. This is in no small part because Twitter dragged its feet on Breitbart News’s appeal

Twitter initially locked Breitbart News’s account because it posted a video of a press conference featuring Rep. Ralph Norman (R-SC) and licensed doctors sharing their views and opinions on coronavirus and the medical response to the pandemic. The event was held by the organization America’s Frontline Doctors and organized by the Tea Party Patriots.

In short, Twitter has punished a news organization for posting a video of a live-streaming of a press conference held by a congressman and licensed medical doctors.

At the event, some of the doctors shared their opinion on hydroxychloroquine, highlighting it as a potentially helpful treatment in fighting COVID-19. One doctor called it a “cure.”

As an aside, Breitbart News is a news company, not a licensed medical professional and has no editorial position on the efficacy of hydroxychloroquine as a treatment for COVID-19. But for Twitter (which is also not a licensed medical professional) to assert  the video contained potentially harmful information rings hollow. Hydroxychloroquine is not Tide Pods; it’s not something people can simply go down to the local drugstore, buy, and ingest without medical advice and supervision.

In the United States, hydroxychloroquine is a legal, FDA approved medication available only by prescription; so a person would have to go to their doctor and get it prescribed after making a decision with their own doctor whether or not to take hydroxychloroquine.

And, whether Twitter likes it or not, or thinks it should be otherwise, doctors are prescribing hydroxychloroquine on an off-label basis for COVID-19. Twitter trying to pretend it is not happening or wishing it was not happening is self-sophistry.

Twitter has demanded that Breitbart News delete the following tweets before restoring access to the account. Breitbart appealed that decision, and pending appeal has been locked out of its account. Incredibly, Twitter took almost three full days to reply to Breitbart’s appeal – meaning time and traffic lost during a fast-moving election season. When Twitter finally did respond, it denied the appeal.

Twitter’s actions have public health implications. The tech giant is preventing the public, including the critically ill, from receiving information from physicians with first-hand experience treating COVID-19 patients. Twitter’s censorship denies the public access to information — and that can put lives, health, and the well-being of Americans at risk. 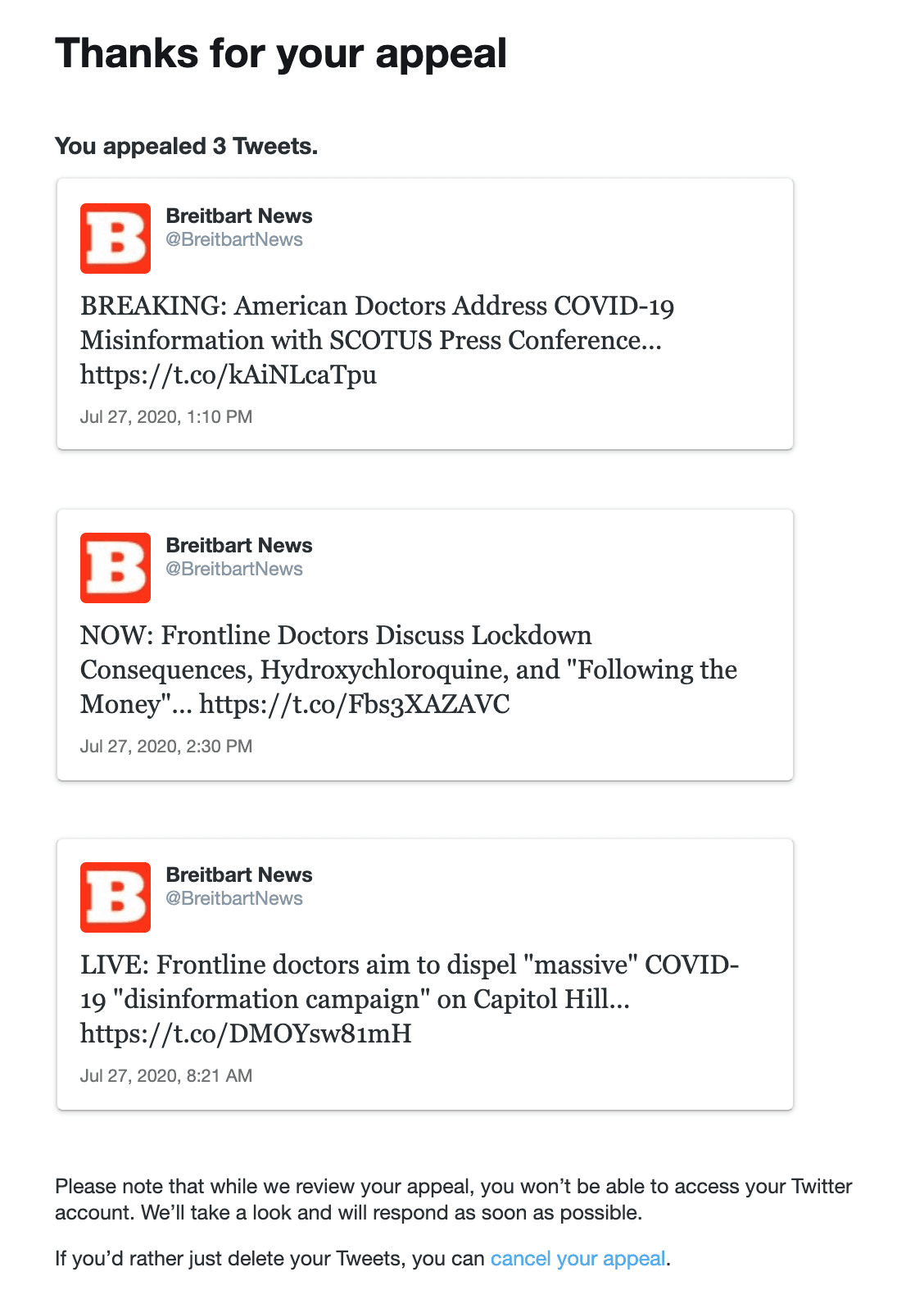 Hydroxychloroquine is a commonly prescribed drug that has been approved for use in the United States since the 1950s and is widely prescribed to treat malaria. The effectiveness of the drug as a treatment for COVID-19 is still the subject of discussion and debate among medical professionals.

Harvey A. Risch, a professor of epidemiology at the Yale School of Public Health, has argued in Newsweek that “tens of thousands of patients with COVID-19 are dying unnecessarily” because use of the drug has become so politicized.

A media panic broke out after President Trump referenced reports that the drug might be effective in treating COVID-19, leading to the drug briefly being banned in Ohio. That ban has now been reversed by the Ohio Board of Pharmacy.

The panic even extended to The Lancet, one of the oldest and perhaps the most prestigious medical journals in the world. A study, widely covered by the corporate media, claiming hydroxychloroquine is ineffective and potentially dangerous, had to be retracted by the journal after major discrepancies were found in the study’s data.

Congressman Louie Gohmert (R-TX), who recently contracted COVID-19, announced yesterday that he would be taking the drug to treat the illness following advice from his doctor.

I am taking #Hydroxychloroquine to treat my coronavirus diagnosis. It is what was decided as the best course of action between my doctor and me–not by government bureaucrats. How long until the tech tyrants censor this tweet? https://t.co/dzAYAXiQ8p

Here is where things stand: There is no definitive medical study that answers the question of hydroxychloroquine’s usefulness in treating COVID-19, especially when used in conjunction with other medications. Many licensed professionals have reportedly treated COVID-19 patients with it, and some have reported at least anecdotal evidence of efficacy. Another way to put it is that the usefulness of hydroxychloroquine remains a topic of open discussion and debate.

Twitter has decided that discussion and debate should not be happening, and is punishing anyone (even a news organization covering a third-party press conference), who in any way airs that discussion and debate. That is not Twitter’s “job.” And, in the end, it may be that Twitter is the one that has, by censorship and omission, effectively “spread” misleading and potentially harmful information related to COVID-19.

Read more at: Breitbart.com and Censorship.news.

Previous :Rutgers declares grammar racist
Next : Peter Schiff: The dollar crash will take down the entire US “house of cards”
Receive Our Free Email Newsletter