The plan by Seattle’s Democratic City Council has been exposed in several documents leaked from the King County Executive’s Office in Seattle.

The move comes hot on the heels of the city’s officials throwing their vehement support into cutting the police department by 50 percent.

The documents, leaked to reporter Christopher Rufo this week, read like a critical race theory paper or a far-left diversity training pamphlet.

They slam America’s criminal justice system, arguing that it is a “white supremacist institution” that must be dismantled entirely.

The papers suggest, however, that the plan that has apparently been years in the making. 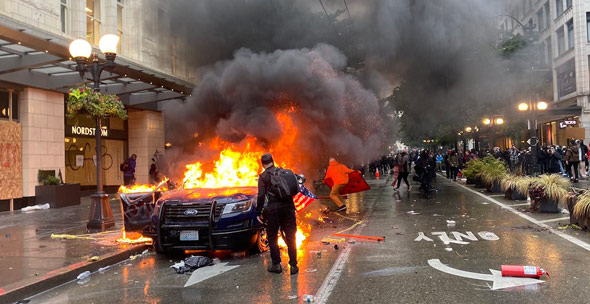 Rufo, the editor for City Journal and director of the Discovery Institute’s Center on Wealth and Poverty, spoke with radio host Glenn Beck on Monday about the leak.

He revealed exactly how and why city leaders plan to abolish the foundational institutions responsible for catching and prosecuting crime, including police departments, jails, prisons, and court systems.

“This is a document that comes from the King County’s executive office, and it really provides the theoretical basis for the executive’s plan to completely and permanently shut down the largest jail, with no plans to replace it,” Rufo said of the first document.

“It has a kind of chart and a pyramid that says that … the things that are foundational to the justice system in Seattle, and in the United States, is white racism, white supremacy, white fragility, and a whole lot of other theories with the kind of the buzzwords that have been circulating lately.”

The document begins by claiming that the justice system is built of a foundation of "racism," "white fragility," and "white supremacist culture." They say that whites have a "need to control" and have designed "social conditions" to "oppress People of Color." pic.twitter.com/YWGQ9y7YuU

The documents go on to claim that crimes committed by “People of Color” are not the fault of the criminal, but the fault of society — specifically white society.

“The logic is, well, if you have a racist society, that in essence forces people, especially people of color, to commit crimes,” Rufo explained.

“I mean, it’s absurd! It doesn’t work in practice at all,” Rufo continues.

“And it gets the causality so skewed it’s hard to even understand on logical grounds.

“But this is the kind of pseudo-scientific, pseudo-academic nonsense that is driving the decision making at the highest levels of government in Seattle, in Portland, in New York, and elsewhere.

“It’s really shocking because they’re really boiling down a very complex social problem, crime, to just, ‘white people are evil and they set up these evil institutions that force people to do wrong.’

“And their solution is not reform at this point.

“For many years, it was about criminal justice reform,” he concludes.

“They’ve moved well beyond that, in very rapid succession, to do criminal justice abolition.”

Watch the video below for more details:

Meanwhile, as Neon Nettle previously reported, Seattle’s chief of police has warned residents and business owners that the SPD can no longer effectively protect them due to restrictions imposed on the force by the city’s Democratic leadership.

On Friday, Seattle Police Chief Carmen Best wrote a letter to residents announcing that they would effectively not be able to enforce the law due to the City Council’s ban on the use of non-lethal crowd control measures.

Following Best’s letter, the city was ravaged by another weekend of violent rioting.

Previous :Red Bull and Goya Foods resist cultural warrior group-think – and sales are off the charts
Next : The biggest lie of this coronavirus hoax is that the state cares about any of you
Receive Our Free Email Newsletter