Democrats are using America’s younger generations like Hitler did his Nazi Youth: So the carnage across America now hints of total destruction ahead if we stay on the same path we’re on

(Natural News) There are certain aspects of the ongoing Black Lives Matter/Antifa uprising that must be made evident to our country’s citizens. The leftist rioters do not understand that what they are doing to destroy our country will not work. The rioting and burning of local businesses, many minorities owned, the overtaking of city property, the tearing down of statues that are a part of our history will do nothing to improve our country.

All the efforts that they feel will intimidate people will only anger those who believe in our country. No amount of indoctrinating our children in academia will keep them from understanding that there is no option for a way of life that has made America the envy of the world. They want to use our children, much like it was done in Nazi Germany.

There are similarities to the Nazi Regime of Hitler and Black lives Matter today. In Hitlers Germany, there was talk of reparations, the monies of those who earned it were taken away and given to those who fomented the revolution. Looting and the destruction of business was also a part of the Nazi regime. Morality and the moral norms that are in any civilized culture were broken down. Freedom of speech and thought were curtailed in the media and everyday discussion if they did not conform to the party line or the “struggle of the people.”

Not mentioned is the struggle of the people in our inner cities with rampant violence and murders. Black Lives Matter never mentions it, the media won’t cover it, and the leftists in the Democrat party ignore it. Why? It doesn’t fit the narrative that they are trying to push on the American people. They can’t virtue signal to defund the police if they discuss that constant murders in the significant cites run by the Democrats. They need to set a narrative where they can make law enforcement the villain, even though they coddle criminals with policies like “no bail” bond to put criminals back on the street.

The same words used by the Nazis, such as “social justice” was an integral part of the Nazi doctrine. The next step recently begun is to have the children tattle of their parents. All of these were the agenda forced on the German people as part of Nazi Germany. It is also a significant part of the plan of Black lives Matter. In essence, the final goal is intended to be to control the lives, speech, and actions of those they do not agree with in any aspect. 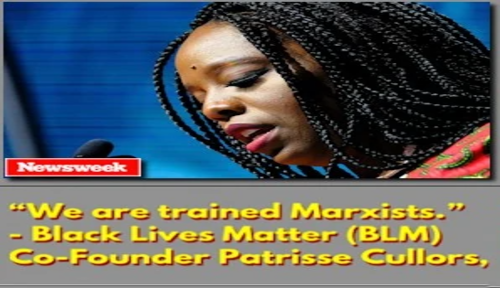 In today’s case, those who do not agree have made it clear that with the help of the progressive socialists and media, they intend to negate those who disagree, conservatives, white, and those who still believe in religion to kneel and treat them as our overlords. They have come up with another mindless bumper slogan – “silence is violence.” It is just a way to force those of our country to blare mindless Marxist slogans to get their approval. They will continue to use mob rule to stifle anyone who may dissent or criticize the Marxist Black lives Matter and globalists who intend to rule.

This will occur because groups like Black Lives Matter intend to do the best they can to break up the nuclear family. In this country, we have an equality of opportunity and equality of effort and not equality of outcome. They want to use Marxist doctrine to nullify the rights of everyday Americans of every color and religion. A little secret is that those on social media and the progressive socialists in the Democrat party do not understand that Americans will fight for their rights.

Duke University may abolish their campus security and allow women to be raped because “policing is inherently rooted in white supremacy”
Peaceful protest? Rioters loot and damage Seattle businesses, injure city cops
Federal officers in Portland may have been PERMANENTLY blinded by rioters with lasers
Scholar says Black Lives Matter movement now more akin to the French Revolution – is a Reign of Terror next?
Corporate giants Amazon, Apple, Google and Walmart all donating millions to domestic terrorism organization Black Lives Matter
It’s time for federal agents to arrest Democrat mayors who refuse to fulfill their duty to protect the people in Democrat-controlled cities
Portland passes resolution barring police from cooperating with federal law enforcement
Violent Antifa rioters once again terrorize Seattle’s Capitol Hill neighborhood as Mayor watches and does nothing
One nation under anarcho-tyranny
BLM, Antifa thugs in Portland “dox” dozens of federal agents in attempt to enable domestic terrorists to attack their families