Earlier this month, Wayback Machine took heed of MIT Technology Review’s protests that they are breathing life into debunked coronavirus ‘hoaxes’, and took to retroactively labelling past web pages and content removed from their original pages with warnings decrying the information presented as false.

The pages in question come from popular platforms such as Medium which, in theory, were launched to allow users to create content without it being editorialised by the powers that be. By redefining content after it has already been removed, Wayback Machine is adding a level of editorialisation atop of another — adding insult to injury by obfuscating original messages and overlaying them with a warning of disinformation. Disinformation being defined as misleading information that is spread deliberately to deceive. 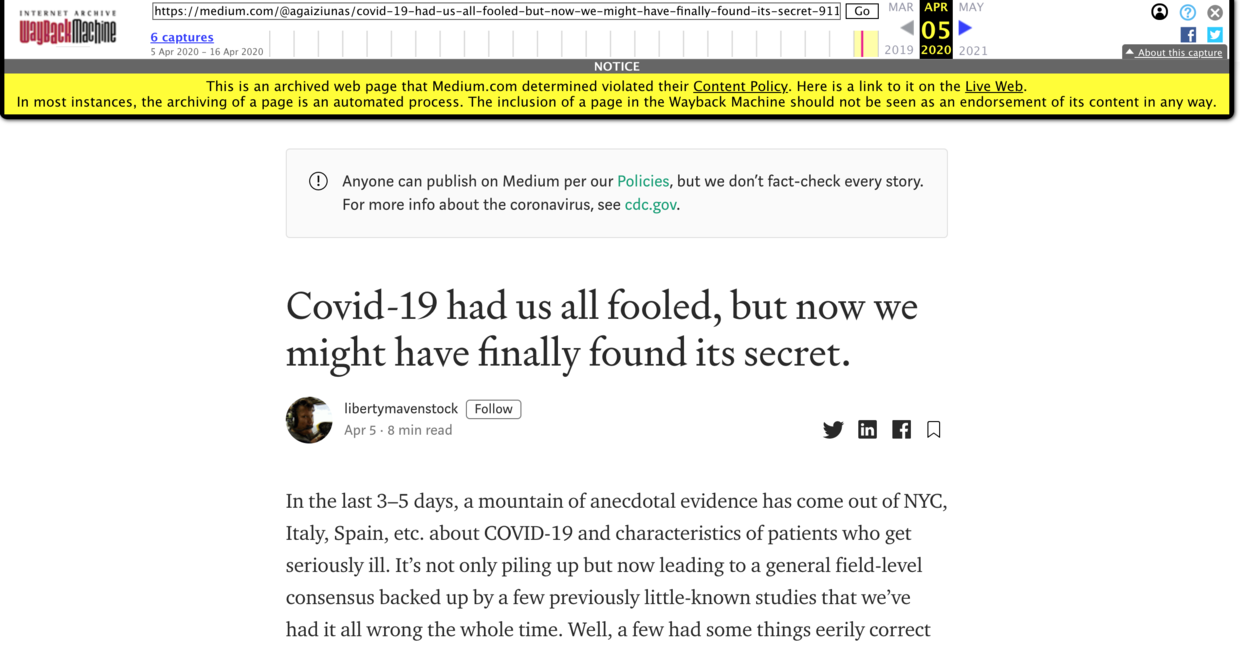 Throughout the big tech sphere, this is nothing new: censorship by the new arbiters of truth is now the norm. However, with coronavirus in full swing, the mission creep toward mass-censorship has become more of a lurch. We are no longer allowed to critically think for ourselves. Instead we are offered one of three options: information, misinformation or disinformation, with the latter hidden away from view lest we get any bad ideas. Nuance, in effect, is no longer an option.

The obvious problem here is that conflicting information surrounding the virus is as widespread as the virus itself. When the world is full of unknowns, who is to say what is and is not disinformation, and where honest miscalculation or tentative prediction ends and malicious intent begins? Why is it that some opinions are removed, whilst others — some proven to be incorrect — are not?

For example, at the end of last month, research collated by the paediatric blog Don’t Forget The Bubbles, together with the Royal College of Paediatrics and Child Health (RCPCH), found that, globally, there is no evidence of children having passed Covid-19 to adults, and that children have much less severe symptoms and often do not have any at all.

Despite this fact, reports across some media outlets in the UK have parroted teacher unions’ cries that it is “Not safe to reopen schools.” Contrary to the evidence then, is this not disinformation? The unions of course have an agenda, so why is this information not labelled as disinformation? Or at the bare minimum, misinformation?

Then there is the tweet by the World Health Organisation published in January that stated that there was “no clear evidence of human-to-human transmission of the novel #coronavirus.” Two months later, the WHO declared a global pandemic. At the time of writing, there is still no signalling that this was, in fact, deeply incorrect. Why has it not been removed and/or changed? Was this not disinformation?

The list goes on. In February, Forbes quoted a doctor who claimed that wearing masks would in fact increase the chances of transmitting the virus. If one today uses the Wayback Machine internet archiving service on the Forbes article in question, there lies no mark of shame decrying it as a hoax, which begs the question, why not? It is possible to read this as at least misinformation if you ignore intent; so why the difference in standards? Are the results not the same?

The answer, one must assume, has nothing to do with what is or is not true. Instead, it seems that this censorship presumes nefariousness upon some, whilst assuming ignorance in others. It is not only the content that is being judged — else the WHO tweet would have been removed or at least labelled — but the author. Gone are the days where we did not shoot the messenger, now both him and the message are fair game.

By towing the censorship line like it has, Wayback Machine — which has offered a valuable service up until this point — is now complicit. The division and disparity in the enforced rules between different voices reveals that behind the mask lies an agenda.

By tarnishing some — but not all — voices with the disinformation brush, much of the media, academia, and (predominantly) big tech are putting ideological allegiances before anything else. Now, as ever, is not the time for that. Once we know more, we can evaluate what is wrong and what is right. However, if we continue to censor the past, attaching intent to some but not to others, we will be unable to evaluate anything at all.