(Natural News) Introducing “You Ain’t Black Enough” CRACKERS, part of the innovative Joe Biden re-election campaign that hopes to help Americans aspire to greatness by telling them how inferior they are.

“You Ain’t Black Enough” crackers are made out of white flour, white salt, white pride and dementia, manufactured and packaged in Whitesplains, Virginia by the Joe Biden cracker family.

Each of the hand-crafted crackers is emblazoned with the likeness of Joe Biden’s face, grinning ear to ear as if he just finished fondling a seven-year-old girl.

The crackers are toasted to a slightly off-white hue, but not too black, just as Joe Biden likes them. #YouAintBlack 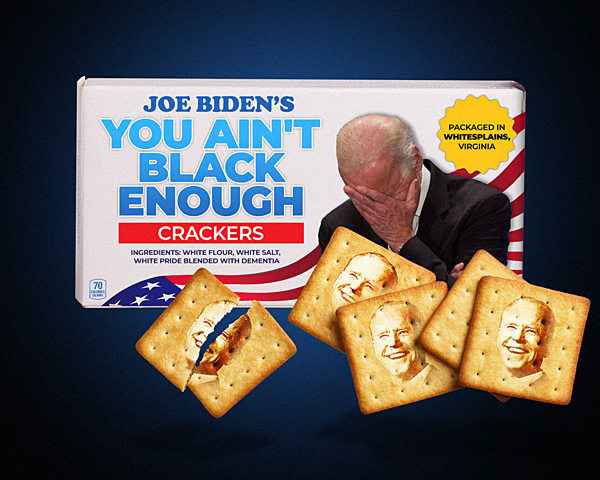 The “You Ain’t Black Enough” crackers are the first in a series of processed food fundraisers expected to be launched by Joe Biden to try to pander to progressives. Other coming attractions include:

Some doctors believe Joe Biden may be suffering from “racial tourette syndrome” that causes him to engage in spontaneous outbursts of racially-insensitive remarks, but Biden’s campaign staffers say his mind is perfectly fine and he’s acting in a completely normal fashion for a Democrat.

Listen to my full podcast explaining why Joe Biden just clobbered his own chances of being elected president, and check JoeBiden.news for more hilarious updates:

Joe Biden announces “You Ain’t Black Enough” CRACKERS as fundraiser for his campaign (satire)
DISGUSTING: Pathogens like salmonella can survive in cookies and crackers for half a year