Evil Facebook now banning any link from Brighteon.com or NaturalNews.com in PRIVATE messaging!

(Natural News) As Joe Rogan is now leading a mass exodus away from the techno-fascist Google / YouTube universe, Facebook is ramping up its censorship to a level that will give Attorneys General across the United States plenty of ammunition in their antitrust lawsuits against the social media giant.

After blacklisting the sharing of any link from Brighteon.com — a free-speech video platform — and NaturalNews.com, Facebook is now blocking any mention of Brighteon or NaturalNews in private messaging on Facebook.

That means this is much more than just censoring the public sharing of Brighteon videos or NaturalNews articles: It’s really about punitive, antitrust oppression of competing sources of user-generated content. Facebook is going “full mafia” and entering the realm of clearly criminal conduct that goes far beyond any protections of Sec. 230 of the DMCA.

Here’s what happens when you try to share a Brighteon or NaturalNews link in a private message on Facebook: “this link goes against our community standards” 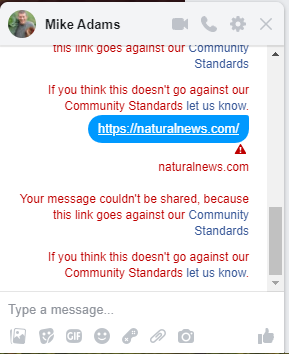 This same message appears regardless of whether you’re sharing a video on home gardening, pet care, women’s health, nutrition, solar power, rainwater collection, the healing arts or any other topic.

This isn’t censorship that targets a political point of view, for example, or even a particular side of a debate. It’s annihilation against an entire content platform and all its users. (Brighteon currently has over 44,000 video channels covering a wide spectrum of views on politics, ecology, science, culture and so on.)

None of these videos were uploaded by us. They were uploaded by other users, and the documentary is protected free speech. But apparently, Big Pharma or the communist China-run W.H.O. has ordered Facebook to block Brighteon in order to halt any sharing of the Plandemic video. That just goes to show you how dangerous the truth is to the techno-fascists and the vaccine deep state.

We need your help to protest this malicious action by Facebook, which is part of the globalist techno-fascist criminal cartel that’s run by China and is now engaged in targeting humanity for extermination via the coronavirus bioweapon and planned financial collapse.

This article at Banned.news lists actions you can take, from emailing Facebook support to requesting Facebook remove the blacklist. You can even file a complaint with the FTC or DOJ.

It is critical that you help us protest this illegal censorship by Facebook. Otherwise, no one will be able to share links from Brighteon videos or NaturalNews articles on Facebook.

In the mean time, we are encouraging everyone to join AllSocial.com, an anti-censorship social media platform run by committed pro-human entrepreneurs, where we are posting our content daily. Our current channels are:

And Joe Rogan is right! It’s time to blow up the death star of the techno-fascists and join a mass exodus away from their tyranny and criminal oppression.

Previous :APPEALS to the President: Mikovits, Adams and Kalcker lay out powerful executive strategies President Trump can use to abolish Big Pharma’s death grip on America
Next : Where to find the Plandemic documentary with Judy Mikovits in Portuguese, Greek, Spanish, Danish, French, Lithuanian, Turkish, Italian and English
Receive Our Free Email Newsletter