(Natural News) It seems that optimistic reports about China having the coronavirus completely under control and Sweden avoiding infections without resorting to lockdowns are both premature.

In news that broke today, China has just placed a city of 11 million people under lockdown as an asymptomatic carrier of the coronavirus managed to infect 70 other people even after she spent 14 days in quarantine and showed no symptoms.

The city is Harbin, and the carrier is a 22-year-old student who returned to China from New York, according to The Daily Star UK. She inadvertently infected dozens of people at a gathering, and one of those people ended up in the hospital, ultimately causing an outbreak that spread across two different hospitals in the region.

“The city has implemented a strict lockdown, with gates to all communities and villages remaining guarded,” reports The Daily Star. “Citizens have been asked to wear face masks when stepping out of villages, as well as have their temperatures checked. Public events have been cancelled and gatherings have been banned.”

So much for the theory that the coronavirus is easy to control.

Deaths in Sweden surge past the USA, per capita

Here’s the chart showing the exploding deaths in Sweden, via Worldometers.info: 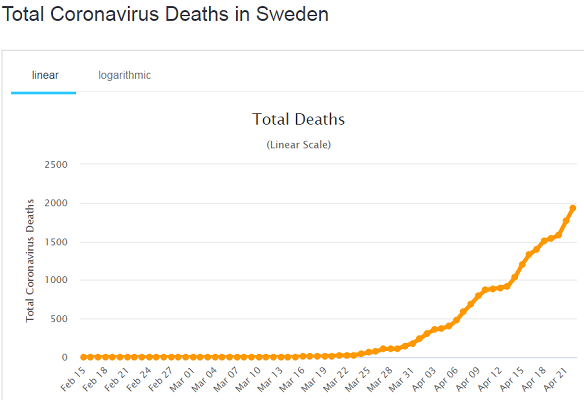 This is what happens, of course, when a nation fails to take the pandemic seriously. For a while, everything looks fine, and then the numbers explode.

It turns out that denialism isn’t a good way to handle a pandemic. We wonder how long Brasil’s Bolsonaro will take to figure out the same thing… (or will the dead bodies in the streets overwhelm his presidential palace first?).

Amazingly, pandemic denialists across America are still citing Sweden as a “success story,” claiming its outstanding handling of the outbreak proves that lockdowns aren’t necessary. But that narrative fell apart over the last 7 days as Sweden’s deaths skyrocketed.

Most U.S. states are nowhere near Sweden’s per capita death rate, meaning that if lockdowns are ended prematurely, deaths have a tremendous amount of room to explode across the population in various U.S. states.

That’s the other lesson in all this: Even with all the deaths in New York (around 700 – 800 per day lately), so far only 1 in 1,000 New Yorkers have been killed by the virus. Covid-19 is just getting started. It has barely begun to penetrate the population at large, especially in states like California which initiated early lockdowns that avoided the New York scenario (NY was ahead of California by around two weeks in terms of infection penetration).

Those who are calling for an ending of the lockdowns but who refuse to wear masks or take other precautions are begging for a death wish.

The current rally cry is, “Give me liberty or give me death!” The coronavirus is happy to oblige on the latter request for anyone stupid enough to not take this pandemic seriously.

The viral brain-eating disease known as Stupid-19, it turns out, is often fatal.

Previous :Here’s what happens next: Lockdowns will be prematurely ended without necessary mask mandates; things will look fine for 6-8 weeks, then a new EXPLOSION of coronavirus infections will emerge
Next : Dear President Trump: To save America, you must ignore the disinformation from your own supporters who are ignorant about infectious disease
Receive Our Free Email Newsletter