The coronavirus killed more Americans in the last 17 days than the regular flu kills in an entire year… today’s US deaths hit 2,800

(Natural News) In the last 17 days, the Wuhan coronavirus has killed more Americans (35,087) than the regular flu kills in an entire year (34,157 for the last year). It obliterates any last shred of the argument — still heard across the independent media — that the coronavirus is “no worse than the flu.”

The coronavirus remains the No. 1 cause of death in America on a day-to-day basis, clocking in at 2,804 deaths just today. Total deaths in the USA will exceed 46,000 tomorrow, confirming our earlier projection that estimated 46,000 to 93,000 deaths from coronavirus in the USA by the end of July. It’s not even the end of April, and we’re already beyond 45,000. (At the time we made the projection, it was dismissed as “crazy” by the very same people who still claim the coronavirus is “no worse than the flu.” Those are the people who can’t do math.)

According to “fact-challenged” publishers such as the Wall Street Journal, the coronavirus is less lethal than the regular flu and only kills 1 in 10,000 people. That bizarre claim — which has now been exhaustively debunked by a rigorous analysis of the WSJ’s fake news — falls apart on its own when looking at the raw numbers of coronavirus deaths: Today the virus killed 2,804 Americans, and it’s been killing more than 2,000 Americans per day for most of the days across the last two weeks. Via Worldometers.info: 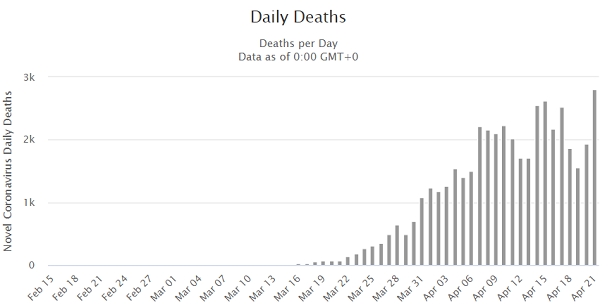 In comparison, the regular flu kills about 94 Americans per day on average. Here’s how covid-19 deaths compare to cancer, heart disease, the regular flu and other causes of death: (this infographic was updated when today’s deaths were 2,660. It later went up to 2,804.)

Deaths in the USA were on track to reach 80,000 per day if the lockdowns hadn’t been initiated in March

Now that our mathematical projection model has been proven correct yet again, it’s time to look at where America was headed if not for the lockdowns. Had the coronavirus been allowed to replicate with no social distancing, no lockdowns and no wearing of masks, the nation would have seen daily deaths continue rising far beyond 2,800 per day. By July, our projections show, they would have reached 80,000 deaths per day.

The fact that we began the lockdowns allowed the USA to avert over 2 million deaths by July. Yet because the lockdowns worked, scientifically illiterate people (mostly pro-Trump conservatives) have declared the lockdowns weren’t necessary. This includes Ron Paul, Rush Limbaugh, Sean Hannity and other prominent conservatives who don’t understand exponential curves: 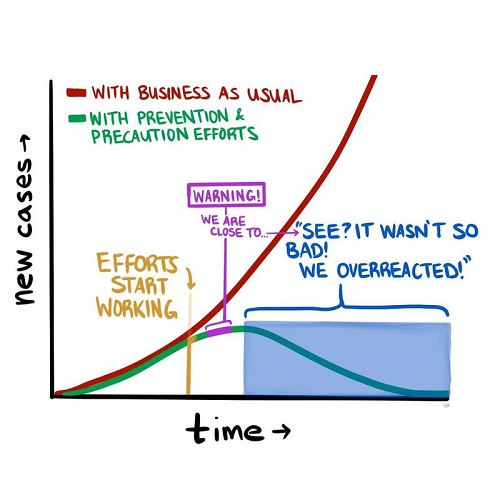 Thank goodness President Trump and many governors across America had the sense to initiate the lockdowns in mid-March. Now, the question comes to ending those lockdowns without re-igniting the exponential spread yet again. The answer to that, it is now abundantly clear, is mandatory masks in public for at least the next several months.

Yet it is pro-Trump conservatives who reject masks, claiming they are a symbol of oppression against what many on the right now believe is a “hoax” virus that isn’t really killing anyone, they claim. That’s part of the reason why ending the lockdowns is now impossible: Because conservatives refuse to act responsibly and wear masks in public.

Thus, the lockdowns will need to continue for a much longer period, it seems, since half of America refuses to take a simple action (wearing masks in public) that will significantly halt the spread of the virus.

Masks allow us to restore freedom and re-open society. Combined with zinc, vitamin D and vitamin C — plus widespread testing — I believe we can end the lockdowns and restart the economy without initiating an explosion in new infections.

Yet I hear a lot of protesters right now shouting things like, “Give me liberty or give me death!” Why not get both liberty and life by responsibly wearing masks in public to help make sure asymptomatic carriers don’t infect others?

Because if people across America are truly going to be stupid about this by refusing to wear masks, the coronavirus is more than happy to oblige their demand to “Give me death.” And I hope I don’t need to remind anyone that you’re not free if you’re a corpse.

Want to defend freedom and beat the virus? Wear a mask when in public areas such as public transportation, retail stores or workplaces. That’s how we beat the virus and restore freedom in America.

Previous :BOMBSHELL: Wall Street Journal caught running a Monsanto-style FAKE SCIENCE scam with Stanford researchers to mislead America over coronavirus infections
Next : Here’s what happens next: Lockdowns will be prematurely ended without necessary mask mandates; things will look fine for 6-8 weeks, then a new EXPLOSION of coronavirus infections will emerge
Receive Our Free Email Newsletter

France, Germany impose fresh lockdowns in the face of resurgent coronavirus cases
Fauci and Biden together: A scientific dictatorship
Multiple studies show COVID-19 mortality rate has dropped significantly since beginning of pandemic
Drug maker Eli Lilly strikes $375 million deal with US government for COVID-19 antibody treatment
Taiwan celebrates over 200 days without locally transmitted case of coronavirus
Trump administration releases plan to allow Medicare to cover cost of coronavirus vaccination
China is using the coronavirus pandemic to speed up its plans for global DOMINATION
WHO: Lockdowns not the primary method for fighting COVID-19, governments must develop “better systems” against pandemic
Top 5 Ways to HEIGHTEN your chances of catching Covid-19
Airlines and transport officials CLASH with CDC over quarantines for airline passengers