California Gov. Newsom warns 25 million could be infected in 8 weeks, which would lead to hundreds of thousands of deaths in California alone

(Natural News) The Governor of California has declared that current projections put the state on track for 25.5 million Californians to be infected within 8 weeks if strong social distancing factors are not immediately put in place.

We did some math on this projection, and we concluded the Governor likely believes the number of infections doubles each week, which means this is 8 doublings, or 2 ^ 8, which is 256. If you divide 25.5 million by 256, you get the number of Californians the Governor believes are infected right now.

That’s a very large number, considering the entire country is only known to have 14,250 confirmed infections so far. Clearly, the Governor is getting information about the likely number of infections that state officials probably know are already circulating around the state.

If 25.5 million Californians become infected over the next 8 weeks, that would translate into 510,000 deaths by around the 12th or 13th week mark, due to the lag time required for people to die. This assumes 2% case fatality rate.

Even worse, if 25.5 million people get infected, and if 15% require hospitalization, this scenario would end up needing 3.8 million hospitalizations.

California is one of the worst states in terms of the number of hospital beds per capita. There are nowhere near 3.8 million hospital beds in California. In fact, there aren’t even 100,000 that are available. Once hospital beds are overrun, the death rate skyrockets to something closer to 15%.

However, in an effort to stop this frightening scenario from happening, Gov. Newsom has essentially locked down the state, issuing a “stay at home” order, “directing all 40 million residents to remain at their place of residence except for essential activities amid the growing pandemic,” reports The Epoch Times.

This means the estimated 510,000 deaths may be avoided, at least by some degree, but it seems highly unlikely that California will escape this pandemic with anything under 100,000 deaths in the long run, given how many people are already infected (and the extreme transmissivity of the virus).

Essentially, what Gov. Newsom is trying to do with the “stay at home” order is #FlattenTheCurve, or spread out the infections over time so that the hospitals don’t get overrun. 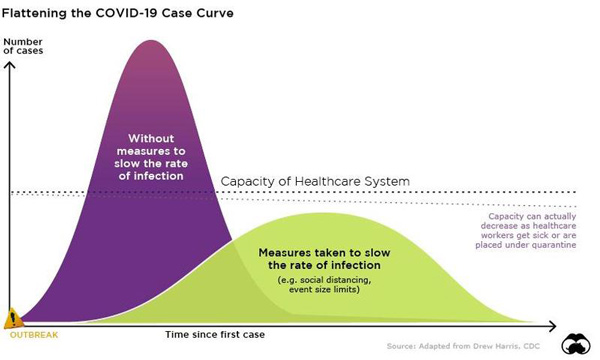 Via The Epoch Times:

Newsom said that modeling suggests that some 56 percent of California residents are expected to be infected, requiring up to 20,000 hospital beds more than the state can currently provide.

Under the order, residents, except key workers, are advised to remain home at all times. Grocery and convenience stores, pharmacies, banks, gas stations, and laundromats will remain open, Newsom said. Restaurants will operate as delivery-only.

Newsom said the order, which he hopes will encourage “social distancing,” won’t be policed by law enforcement, but the other will rely on citizens up uphold a “social contract.”

In other words, it’s not medical martial law yet, but if stupid, complacent, ignorant people keep insisting the coronavirus is a “hoax” (i.e. many Trump-supporting conservatives like Rush Limbaugh and The Gateway Pundit), Gov. Newsom will eventually have little choice but to roll out the National Guard and start “policing the non-compliant masses” who are too stupid to do the right thing and stay home on their own.

This current voluntary order is probably the prelude to a much more draconian order yet to come, so if you’re reading this from California, please #StayTheF##kHome and help slow the spread for the next few weeks. We can all get through this, but only if we work together to achieve some social isolation without causing the government to go into full draconian quarantine mode.

Hear all our coronavirus podcasts at Pandemic.news.

Previous :Dr. Paul Cottrell: 165 million Americans will be infected, 6.9 million will DIE from covid-19 in the next 20 months
Next : Many food and materials providers have stopped answering their phones: Urgent food supply podcast update from Mike Adams
Receive Our Free Email Newsletter