(Natural News) Updated for Feb. 28th: As we publicly predicted would happen four weeks ago, the coronavirus is exploding around the world. Today, the number of new infections outside China exceeds the number of infections reported inside China.

Here are the highlights of what’s happening so far:

– California looks set to explode into another Italy scenario as local, human-to-human transmission now appears to be taking place in Solano County, where a woman now critically ill with the coronavirus previously exposed dozens of hospital workers in two hospitals. She was not tested for 11 days because the CDC’s testing flow chart — exactly as we’ve been warning for over a week — excludes the testing of people who contract the virus in America and who didn’t visit China.

– The Governor of California stated yesterday that California has only around 200 test kits for the entire state. To this very day, there is virtually zero testing of anyone happening in the entire United States — a fact that many people still are unable to believe (they remain in total denial). The SF Chronicle also confirms this story.

– According to a highly disturbing Wall Street Journal story, federal employees who ran the quarantine sites in California and elsewhere failed to wear proper protective equipment (PPE) and also weren’t trained in how to handle people exposed to the virus. Most disturbingly, as the WSJ subhead says, “Employees weren’t tested for virus before leaving California quarantine sites on commercial flights.”

From the WSJ story:

A whistleblower alleges that some federal employees were sent to work at coronavirus quarantine locations in California without adequate safety protocols and then flew back home on commercial airplanes, according to a person familiar with the complaint against the Department of Health and Human Services.

The employees weren’t tested for the coronavirus before they left two California quarantine sites, the March Air Reserve Base in Riverside and Travis Air Force Base in Fairfield, and flew home, the person familiar with the complaint said.

– According to a Yahoo News story, law professor Christopher Robertson and Professor of Medicine Keith Joiner have penned an op-ed demanding that anyone not vaccinated against the coronavirus be restricted from all commercial air travel in America. This is the beginning of the “medical police state” push for mandatory vaccines at gunpoint, combined with gunpoint-enforced medical quarantines of “anti-vaxxers.”

– Mexico has now confirmed its first coronavirus case, underscoring the reality that the coronavirus is now in Central and South America (there are also confirmed cases in Brazil).

– According to a story in The Epoch Times, dozens of state and local laboratories in the USA will finally have permission to begin testing for the coronavirus next week, after nearly a month of CDC-engineered delays that prohibited lab tested across the entire country (explaining why nearly all U.S. states have tested exactly ZERO patients to date).

– Nigeria has now confirmed its first case, bringing the potential horror of the coronavirus to sub-Saharan Africa, reports The Epoch Times. Bill Gates had previously estimated that a coronavirus outbreak in Africa could “kill 10 million people in Africa.” That process has almost certainly already begun.

– Two dogs in Japan have tested positive for the coronavirus, indicating the pandemic has crossed into the canine species now, potentially putting millions of dogs at risk worldwide and bringing a new wave of fear among dog owners.

– Pandemic.news is now posting daily updated numbers on state-by-state statistics for the number of people tested in each state. So far, those numbers are mostly zero. That’s expected to change dramatically next week as state labs are finally given permission by the CDC to begin testing for the virus.

The following chart, via @jodigraphics15 with h/t to ZeroHedge, shows in blue the number of reported infections outside of China. Note where this trend is going: The global spread has already begun to dwarf the spread in China: 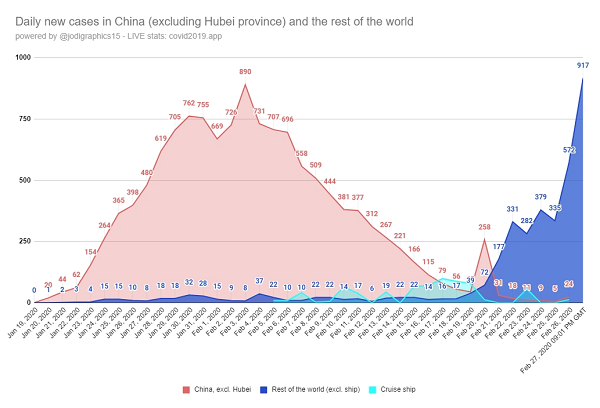 Most people remain totally unprepared for any outbreak. They will soon panic because the lying media deceived them and told them this pandemic was “no worse than the flu.” That lie has been repeated by Rush Limbaugh and a long list of conservative publishers, none of whom seem to have any clue what’s happening. We’re talking exponential growth here, with a mortality rate that could kill literally over a hundred million people around the world.

Previous :Solano County, where critically ill woman exposed dozens of hospital workers to the coronavirus, is home to Travis Air Force Base that tried to export infected patients to city near Los Angeles
Next : MULTIPLE community outbreaks tracking in California as coronavirus set to explode across USA beginning next week
Receive Our Free Email Newsletter