(Natural News) Literally overnight, CoVid-19 coronavirus infections doubled in South Korea to 204, representing an alarming explosion of human-to-human transmission outside of China and indicating that China was just the first wave of an accelerating global pandemic. (See Pandemic.news for focused updates, podcasts, videos and science documents.)

With the number of non-China infections more than doubling in the last week, we are now seeing exponential growth in infection numbers across Asia, even as China is desperately manipulating its own numbers to try to present an image that it has the coronavirus under control. Notably, China just brought in 40 new mobile incineration ovens to dispose of “animal corpses” in its fight against the virus. And by “animals,” they of course mean people (whom they treat as animals all the time anyway).

The big realization in all this is that the coronavirus pandemic won’t be limited to China as has been falsely asserted by nearly every “mainstream” media outlet over the last several weeks. Sustained, human-to-human transmission is already out of control in many additional nations, including South Korea.

There is no conceivable scenario now where this stop spreading across Asia. Anyone telling you this is “contained” is either lying or ill-informed.

North Korea, by the way, flat-out refuses to report any numbers at all, and Indonesia’s government had previously announced they wouldn’t be conducting any coronavirus testing because the test kits were too expensive.

Confirmed infections have now spread to Lebanon, Egypt, Israel, Belgium, Finland, Cambodia, Spain and Sri Lanka, among other nations. Although the numbers from those nations are currently small, they will of course explode as additional testing identifies more people who are already infected. (Remember, “official” numbers don’t count people who haven’t yet been tested.) 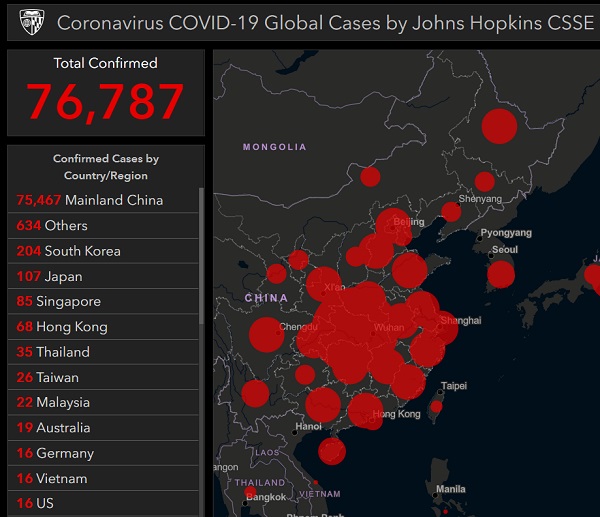 Meanwhile, patients in China who have been “cured” and sent home are starting to show a second surge of the virus after an additional 10-day incubation period. This means people who have recovered and are sent home can then become spontaneous super spreaders yet again, without any apparent explanation yet understood by present-day doctors and epidemiologists.

This horrifying fact is being covered all across Asian media today, including on Yahoo News Taiwan: (translated)

According to the People’s Daily, the district of Wangjiang Jinyuan in Chengdu, Sichuan Province, who lives in five 3rd floors of Wuhan pneumonia confirmed patients recovered, went home to quarantine, in 10 days the patient and their families have not been out of the door, in addition to wearing masks, gloves to walk a specific channel to the fixed-point hospital re-examination. On February 19th, the patient’s retest results were nucleic acid positive, medical institutions in the same evening, immediately picked up the patient and his family for further verification and isolation.

In other words, she was cured and sent home, then later suffered another outbreak of the coronavirus in her own body, once again testing positive for the virus as a kind of “second wave” of infection.

So far, this fact is completely unknown to the entire “mainstream” media in the United States.

Right now, you have advanced knowledge of the coronavirus outbreak that’s coming to North America. What will you do with this knowledge?

Follow all our new podcasts, videos, articles and more at the new site Pandemic.news

Previous :CDC official warns U.S. hospitals: Be ready for “surge” of coronavirus patients in America
Next : Italy locks down 50,000 people across 10 towns as coronavirus outbreak leapfrogs across Europe
Receive Our Free Email Newsletter