Coronavirus infections skyrocket over 2000% in just 10 days as uncontrolled outbreak explodes past 20,000 infected

(Natural News) Ten days ago, the number of coronavirus infections was officially 916. Today, after a 16-hour freeze on new numbers from mainland China, the official numbers took another stunning leap to 20,622 infected and 426 dead.

That’s more than a 2000% increase over just ten days. It’s further proof that this coronavirus infection is not contained and not “under control” as the dishonest mainstream media (and lying tech giants) are trying to get people to believe. Any epidemic that experiences a 2000% increase in 10 days is clearly beyond containment and experiencing self-sustaining replication, by definition.

As the following chart shows, the coronavirus is spreading much faster than SARS, in about one-third the time. This is due to the biological weapons engineering of the coronavirus strain, which has now been confirmed in multiple ways to be of laboratory origin: 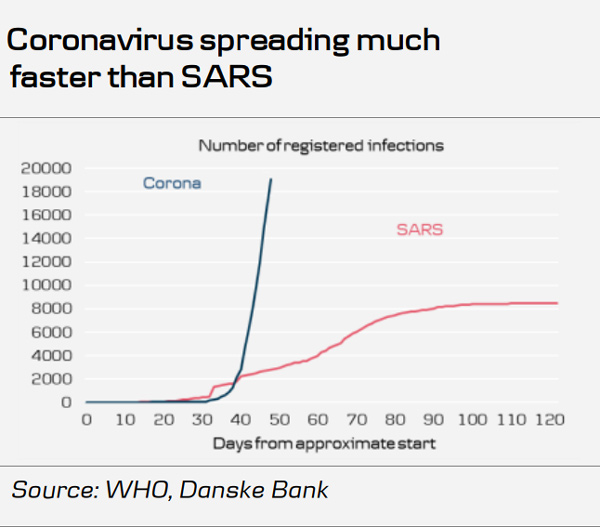 The tech giants, meanwhile, are rapidly de-platforming anyone who talks about the coronavirus, trying to eradicate “rumors” (i.e. real information) in order to cover up for China’s catastrophic biological weapons experiment gone wrong. That’s right: As a global pandemic spreads, the communist government of China is lying about the number of infected and dead while the tech giants are silencing every person who’s trying to warn the world about the truth.

It’s yet another example of how the tech giants are truly enemies of humanity and seem to actually want the coronavirus to achieve a global depopulation outcome that’s consistent with Bill Gates’ lectures on reducing the human population on planet Earth.

Now, a terrifying new video has hit the internet. It appears to show a surveillance video of a man who collapsed and died in less than 60 seconds, experiencing convulsions and muscle paralysis before completely collapsing, apparently unable to breathe. While we can’t yet confirm this video depicts a coronavirus infection, it is consistent with the multitude of other videos we are seeing that show people collapsing in the streets and dying suddenly. Note the embedded date on the video is Feb. 1, 2020, and note that this sudden onset of symptoms almost looks like a nerve agent attack of some kind, perhaps pointing to the bioweapons “payload” which has been engineered into this virus.

As you watch this horrifying video, remember that the mainstream media is still telling you this is “nothing more than a common cold.”

Eleven cases of the coronavirus are now confirmed in the United States, according to the CDC, and many of those individuals have reported they were interacting with unknown numbers of the public for many days before they were diagnosed. As these CDC reported earlier today, the coronavirus is now spreading from person to person inside the United States, infecting people who never visited Wuhan, China:

The Centers for Disease Control and Prevention (CDC) today confirmed that the 2019 Novel Coronavirus (2019-nCoV) has spread between two people in the United States, representing the first instance of person-to-person spread with this new virus here.

Previously, all confirmed U.S. cases had been associated with travel to Wuhan, China, where an outbreak of respiratory illness caused by this novel coronavirus has been ongoing since December 2019. However, this latest 2019-nCoV patient has no history of travel to Wuhan, but shared a household with the patient diagnosed with 2019-nCoV infection on January 21, 2020.

Here are some additional videos from Brighteon.com that show some of what’s happening in China. Remember that most of these videos are banned by Google, YouTube, Facebook, Twitter and Vimeo because the evil tech giants have gone all-in with China to bury the truth and lie to the world about this pandemic:

Previous :Irrefutable: The coronavirus was engineered by scientists in a lab using well documented genetic engineering vectors that leave behind a “fingerprint”
Next : In explosive interview, author of Bioweapons Act Dr. Francis Boyle confirms coronavirus is an “offensive biological warfare weapon”
Receive Our Free Email Newsletter