(Natural News) With coronavirus now confirmed in New York City and worldwide infections nearly at 10,000, the CDC has quarantined 195 Americans who lived in Wuhan, China and were evacuated on a private chartered flight.

According to a press release issued by the CDC:

The Centers for Disease Control and Prevention (CDC), under statutory authority of the Health and Human Services (HHS) Secretary, has issued federal quarantine orders to all 195 United States citizens who repatriated to the U.S. on January 29, 2020. The quarantine will last 14 days from when the plane left Wuhan, China.

The CDC is not wrong in issuing this order, since isolation is the only truly effective way to spread this highly infectious viral strain. However, it represents a sobering milestone, realizing that Americans can now be imprisoned against their will on U.S. soil, and that the severity of the outbreak has already reached the point where the CDC’s concern about the spread of the virus has resulted in the kind of quarantine order that hasn’t been used since the 1918 Spanish Flu outbreak.

Again, the CDC is not wrong to do this. In fact, they would have been dangerously wrong if they failed to do this. Given that these 195 Americans are straight out of Wuhan, holding them for 14 days is the prudent thing to do, especially when considering the fact that this coronavirus strain is documented to easily spread from symptomless carriers who don’t even know they have it.

But it is interesting to note that the federal government has demonstrated very little willingness to stop open borders migrants from carrying many other infectious diseases into the United States. Americans from China are sitting in quarantine right now, but illegal aliens from Honduras are walking right into the country, with no health testing or barriers whatsoever.

Here’s a breakdown of the currently known infections by region:

The CDC justifies its actions as follows, from the CDC.gov website:

Under 42 Code of Federal Regulations parts 70 and 71, CDC is authorized to detain, medically examine, and release persons arriving into the United States and traveling between states who are suspected of carrying these communicable diseases.

As part of its federal authority, CDC routinely monitors persons arriving at U.S. land border crossings and passengers and crew arriving at U.S. ports of entry for signs or symptoms of  communicable diseases.

If a quarantinable disease is suspected or identified, CDC may issue a federal isolation or quarantine order.

In other words, if the CDC merely believes you might be carrying an infectious disease, they can order you placed in quarantine.

Here’s the current wold map of infections, via the WHO: 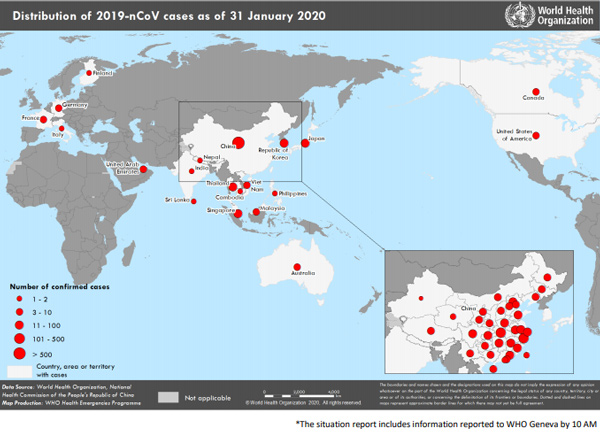 Coronavirus has now made history in America: The first government quarantine of U.S. citizens in over a hundred years.

Sadly, most U.S. citizens remain completely oblivious to the truth about the coronavirus pandemic. Listen to my podcast below for full details: