(Natural News) There is a special place in the underworld for those who promote anxiety, desperation, and terror in the most vulnerable.  A place where the infernal warmth is particularly torrid.

And one does not have to spend much time looking for candidates for this netherworld–the front page of the Seattle Times will do fine.

On Sunday, our local tabloid featured a story about fearful/desperate folks dealing with their apocalyptic fears about climate change. 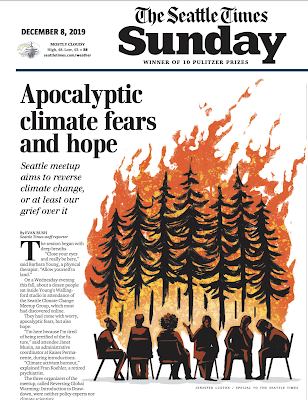 A forest burning behind them. And if that didn’t get the message across, a burning world/head within the article made it clear. 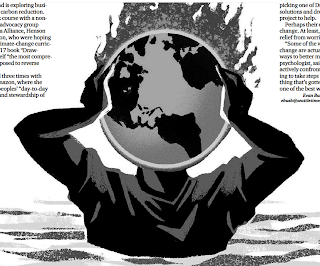 Among certain vulnerable people in our region, talk of eco-grief and anxiety has become signs of psychological crises. The UW Bothell has entire class given over to eco-grief, and non-profits like Climate Action Families have sessions for folks that are paralyzed with fear and grief over climate change.  Some local Seattle therapists are specializing in climate grief therapy, and even the UW has sessions for students: 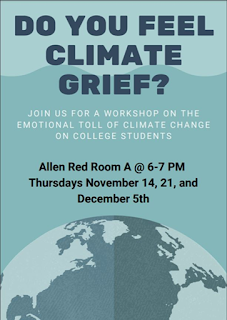 Unbelievably, even the Pacific Science Center is doing a session on dealing with eco-anxiety (see below).

But why stop at the borders of Seattle?   Major media from the Guardian to the NY Times are covering climate anxiety, with anxiety-racked climate stars like Greta Thunberg are tearfully describing how their dreams and their childhood have been stolen by climate change. 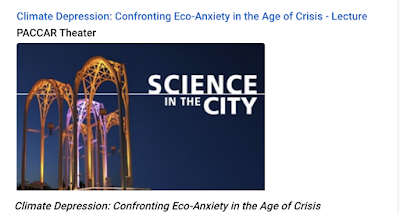 I have gotten so many calls and emails from desperate folks I can’t list them here.  One woman tearfully told me her mother was desperately ill in California, but she couldn’t move to be with her because she was afraid of the effects of climate change in that state.  Another woman called, terribly worried about fires in western Washington from global warming.  A few others asked about where they should move to escape our local apocalyptical conditions.

Global warming is a very serious issue, but most of the impacts are in the future.  There is much we can do to address global warming, both in terms of adaptation and mitigation. There is, in fact, much reason for optimism.

So why are all these people so anxiety-ridden and desperate?   I believe it is the unconscionable exaggeration, hype, and fear-mongering of our media, special interest groups, some activist scientists, and a number of politicians.  And it is unethical, ungrounded in science, and hurting the most vulnerable among us.

The Seattle Times is one of the worst offenders.  I can provide a few dozen example of fear-mongering headlines, completely adrift from the truth.  Like the June story claiming heat waves will claim hundreds of lives (actually 725) for each heat wave later in century (see below).  It was complete nonsense, with extreme assumptions about warming rates and assuming no one would buy an air conditioner.

By the way, the stories in the Seattle Times are so confused, they can’t event get the key facts right, with one claiming carbon monoxide, not carbon dioxide is the problem (I kid you not, proof below). 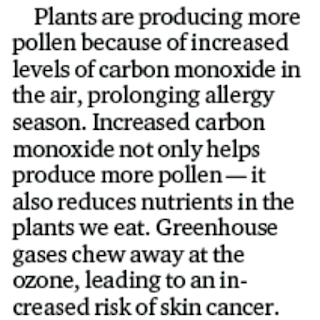 So the Seattle Times is both producing exaggerated, fear-inducing stories and covering the psychological damage those stories are creating.  Is there something wrong here?

Stories in a number of media outlets, amplified by special interest groups, talk about “tipping points”, and that it will be too late in 1, 10 or 12 years.  No hope after that.  Unfounded in the science.  And enough to push some emotionally sensitive people over the edge.

Here in the Washington State there are claims that recent fires are the result of climate change, and that it is about to get even worse.  The truth is very different– there used to be MANY more wildfires in our region and the relationship of our fires with climate variations is very weak.  But that hasn’t stopped irresponsible politicians from claiming just the opposite.

And, of course, there is all this talk about existential threats (yes, the means threats to your EXISTENCE), which have no support in the reports of the international scientific community (the IPCC) or the U.S. Climate Assessment.  They predict a minor reduction in the future GDP, no more.

I could do ten blogs on this topic, but I won’t.  The truth is that some very irresponsible folks are hyping and exaggerating the impacts of the minor global warming we have had so far, sending vulnerable individuals into a panic.   And these irresponsible folks and individuals are painting an apocalyptic view of the future that is completely at odds with the best science.  Some do it for more money (advertising clicks), some do it for political reasons, and others like the attention.

But it is just wrong, and the harm they are doing to members of our community is substantial and unconscionable.