SCIENCE teachers are told to tell students that all differences in the outcomes of people are due to bigotry and racism… it’s CONSENSUS!

(Natural News) Washington STEM, a nonprofit social justice organization focused on the fields of science, technology, engineering, and math in education, recently held a symposium where the group’s Impact Director, Jeneé Myers Twitchell, basically told a group of teachers that these four core areas of academics are “racist,” simply because “minorities” tend to underperform at them.

The below visual slide depicts the message that Twitchell aimed to convey to her listening audience: mainly the notion that non-white people who fail to get the same high test scores as their white counterparts are always victims of “bigotry,” which Twitchell also defines with an asterisk as “racism, classism, sexism, etc.” 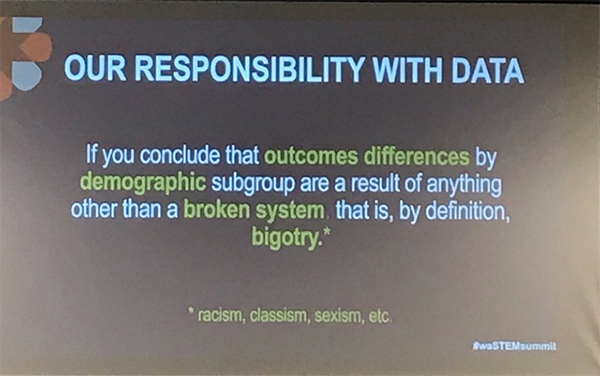 “If you conclude that outcome differences by demographic subgroup are a result of anything other than a broken system, that is, by definition, bigotry,” the slide explains, clearly suggesting that non-white people should always get the same or better test scores than white people otherwise they’re being persecuted by “white supremacy.”

What this is really saying is that Twitchell is an anti-white racist, seeing as how her implication is that all white people are automatically “privileged” simply because of the fact that they were born with pale skin. And brown and black people, the perpetual victims of American society, according to the Left, are struggling to keep up because of a “broken system.”

But what, exactly, is so broken about it? Facts are facts. Tests are tests. Every student is assessed using the same metrics, and their test scores reflect that. There’s no test form anywhere out there that has one set of standards for whites, and another set of standards for blacks and browns. And even if there were, it would almost surely be stacked against white people, because “equality.”

For more related news about how real education is going out the window in the name of “equalizing” the playing field, be sure to check out CampusInsanity.com.

Back in the spring, a postdoctoral researcher at the University of Cambridge experienced first-hand a little bit of this anti-white racism when he was fired for conducting “problematic” and “racist” research.

Social scientist Noah Carl was not only fired but also stripped of his fellowship for conducting research into how allegations of electoral fraud in England tend to come primarily from areas with large immigrant populations of Pakistani and Bangladeshi people.

There was nothing factually incorrect about Carl’s research, it’s important to note. He merely identified these two immigrant population groups as a “robust predictor of two measures of electoral fraud allegations,” these being designations by the Electoral Commission and police enquiries.

Carl also brought up the fact that consanguinity, or cousin marriage, as well as corruption are high in both Pakistan and Bangladesh, which could explain why “norms of nepotism and in-group favoritism” persist within them.

“To bolster my interpretation, I use individual level survey data to show that, within Europe, migrants from countries with high rates of cousin marriage are more likely to say that family should be one’s main priority in life, and are less likely to say it is wrong for a public official to request a bribe,” Carl concluded.

However, for daring to say anything “negative” about a non-white group, Carl was immediately sent to the gallows of political correctness, which actually disproves everything that Twitchell was saying to her audience of science teachers in Washington state.

“There must be a lot of bigotry in the NBA,” Carl joked after his own firing at the hands of the anti-white racists who run his former school.

Previous :“Decarbonize” means DEPOPULATION, because humans are carbon-based organisms… AOC, Bernie Sanders are actually promoting extermination of humans
Next : Google has “a chokehold on all human information” and an evil, twisted agenda to destroy human dignity and ERASE human knowledge
Receive Our Free Email Newsletter