(Natural News) The polio vaccine has caused an escalating outbreak of polio in the Philippines, according to the World Health Organization and UNICEF, which issued a joint statement admitting the vaccine is causing polio.

“WHO and UNICEF said in a joint statement the polio outbreak in the Philippines is concerning because it is caused by vaccine-derived poliovirus type 2,” writes the Associated Press. “The weakened virus used in vaccines replicates for a short time in children’s intestines and is excreted in their feces.”

Polio vaccines are often cited as a success story proving that vaccines work to eliminate infectious disease. In truth, nearly all the cases of polio in the modern world are caused by polio vaccines themselves.

Stated plainly, more cases of polio are caused by polio vaccines than from wild polio. 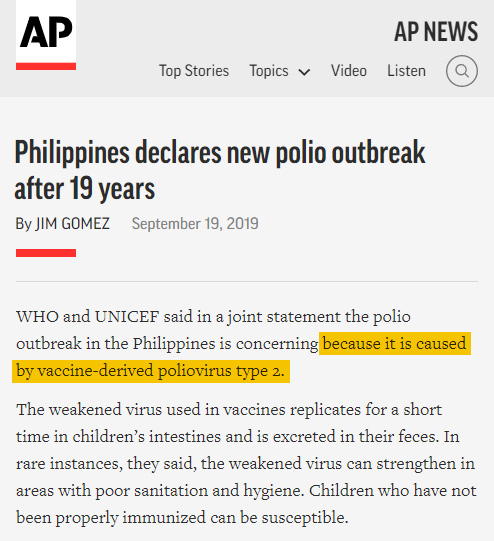 The alarming surge in vaccine-derived polio cases presents vaccine planners with a “quandary” or “conundrum”—because “The very tool you are using for [polio] eradication is causing the problem.” …Vaccine researchers have long known that these OPV-derived viruses can themselves cause polio, particularly when they get “loose in the environment.”

The government’s immunization programs were marred in 2017 by a dengue fever vaccine made by French drugmaker Sanofi Pasteur which some Philippine officials linked to the deaths of at least three children. Duque and other Philippine health officials say they have worked to restore public trust in vaccines since then.

Even worse, as the AP admits, vaccines for dengue fever were actually found to increase the risk of severe dengue infections:

The government halted the dengue immunization drive after Sanofi said a study showed the vaccine may increase the risk of severe dengue infections. More than 830,000 children received the Dengvaxia vaccine under the campaign, which was launched in 2016 and halted in 2017. Sanofi officials said the Dengvaxia vaccine was safe and would reduce dengue infections if the vaccination drive continued.

Vaccine “science” is a fraud

Modern vaccine “science” is a total fraud. Vaccines kill or maim millions of children around the world each year, yet any journalist who investigates the toxicity of vaccine ingredients or the science fraud behind vaccine propaganda is immediately banned from all major tech platforms, including Google, Facebook, YouTube, Twitter, Pinterest and even Vimeo.

No facts about vaccines are allowed to be shared or discussed. The corrupt, criminally-operated vaccine industry controls the narrative across all tech giants — including Wikipedia — as well as Hollywood, universities and medical journals.

The vaccine industry murders children for profit, then silences anyone who works to protect children from the scourge of dangerous immunizations carried out with toxic ingredients like aborted human fetal tissue, aluminum, mercury and chemical adjuvants.

Watch this shocking video revealing the truth about aborted human fetal cells used in vaccines, totally admitted by the CDC and vaccine manufacturers:

Stay informed and keep your children safe. The vaccine industry is causing the pandemics that the lying corporate media uses to stir up mass hysteria that pushes more vaccine sales.